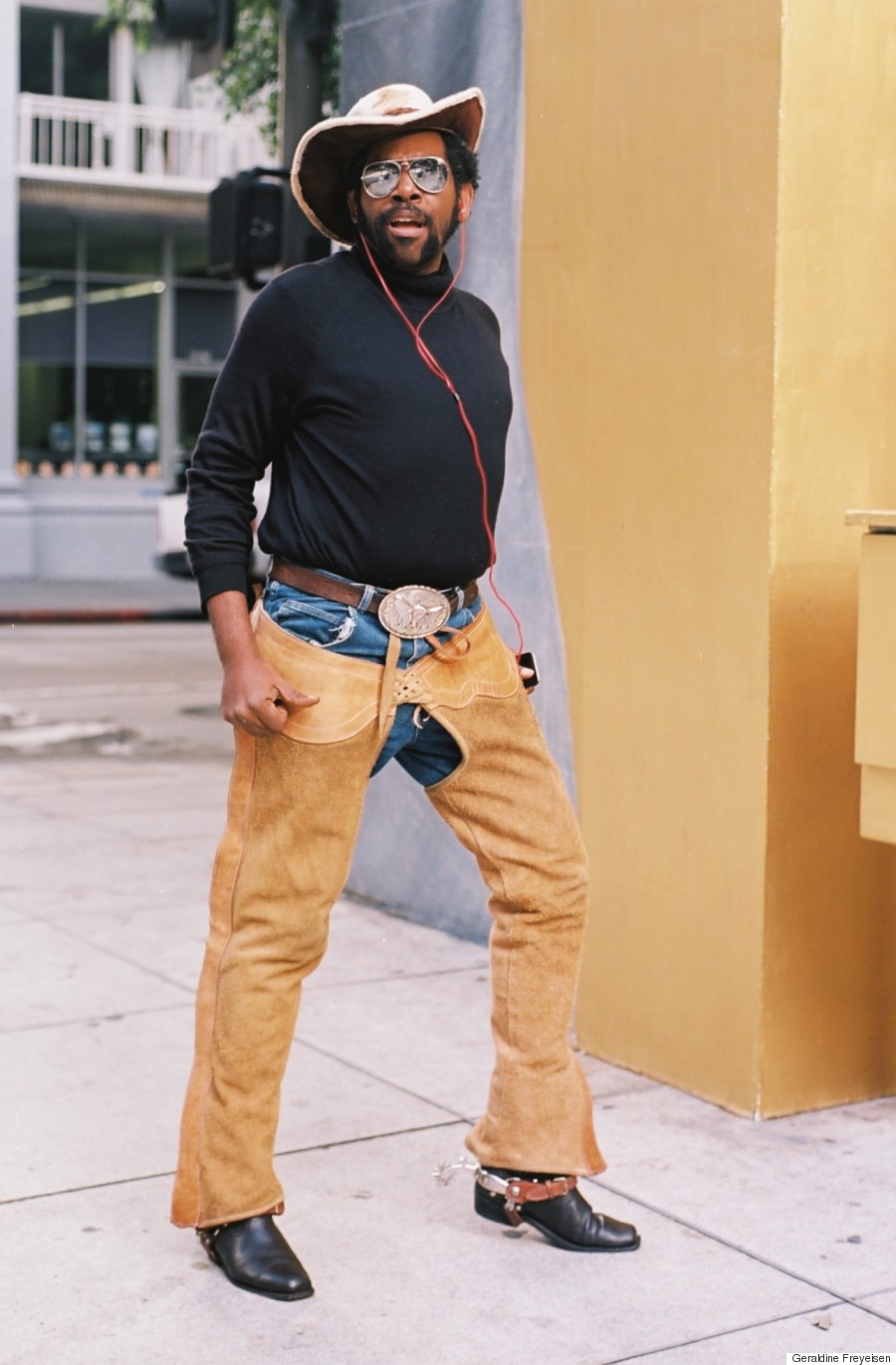 "I wanted to show something uplifting and joyful,” French photographer Geraldine Freyeisen told The Huffington Post from her windowless studio, just steps from Los Angeles' Skid Row, on a sweltering afternoon in March.

Freyeisen has spent the last year in the most densely populated homeless community in the U.S. The 35-year-old’s images of incredible fashion in Skid Row are bright, fierce, full of light and full of life. To understand Skid Row, "you need to have a reason to be here," she said. "If I were to just pass by, I would have missed the whole thing."

Motivated by a free fashion school developed in the favelas of Brazil, Freyeisen is launching a fashion line in collaboration with Skid Row artists -- 50 percent of the proceeds will go directly back to them.

“What people don’t really know about the neighborhood is the creativity," she said. "And it’s not just the style -- I have met so many artists here.”

Freyeisen bought a sewing machine and keeps it in her studio. There are already racks of clothes hanging in the corners of the space and fabric, paint and yarn on the shelves. “When you take photos, you’re a spectator. I wanted to be active,” she said. 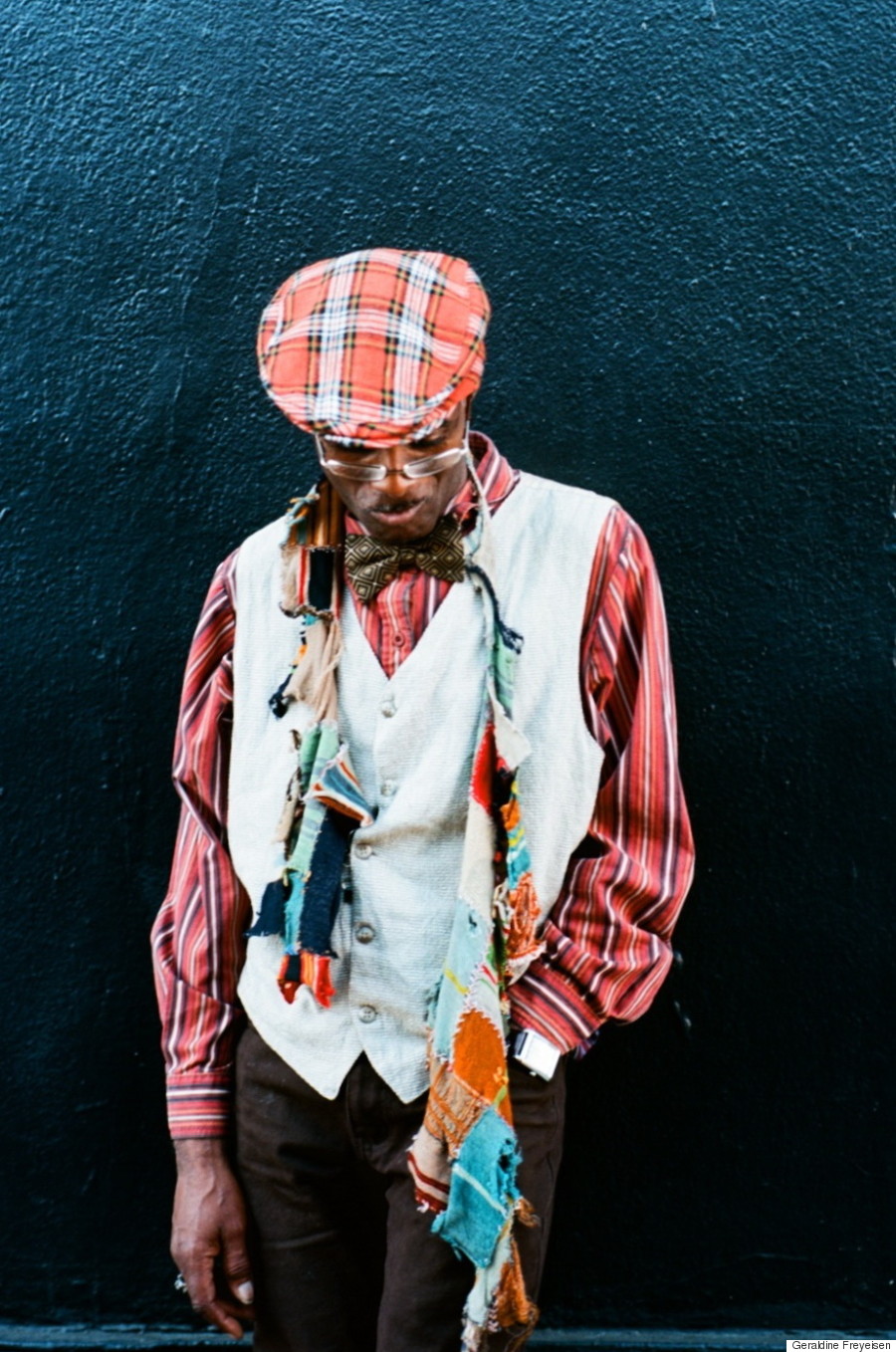 Launching a brand -- it’s already trademarked, called The Swagabonds -- is not easy in this kind of an environment. Finding artists to work with who are sober and capable of representing themselves were the biggest two concerns, she said.

“I took photos of the Flower Man. He’s been homeless for 30 years and he has that name because he makes these little flowers out of ribbon," she said of a man named Donald. "He is very stylish and creative."

Freyeisen arranged for the two of them to take a sewing class together and now the Flower Man makes his designs out of higher quality material and -- “voilà,” she said -- they sew the flowers onto jackets.

Her plan is to sell online -- and not cheaply. The price point will be around $300, and while artists will take home 50 percent of the proceeds, the other half will cover the costs of the project.

She buys clothes, mostly jackets and sweaters so far, from second hand stores and the Skid Row artists are experimenting with adding embroidery and painting. Freyeisen has also screen printed one artist’s painting onto the backs of jackets. 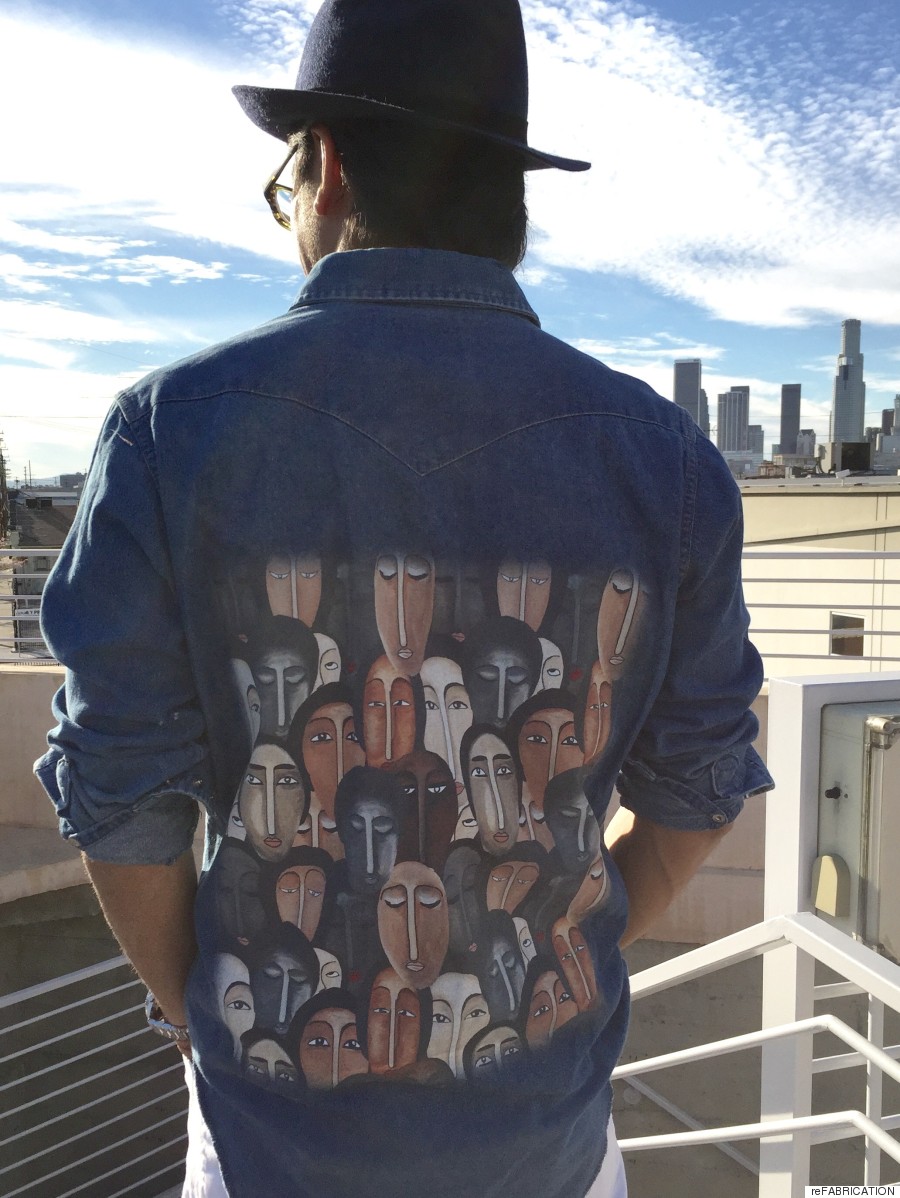 She has already invested over $10,000 of her own money for studio rent, the trademark lawyer, clothes, fabric, a camera and the sewing machine.

“It goes fast,” she said of the money. “But I know it’s going to work. The story is so powerful.”

She hopes to raise money with a crowd-sourced funding campaign, either on Indiegogo or Kickstarter, and is putting together a video to help explain the project. 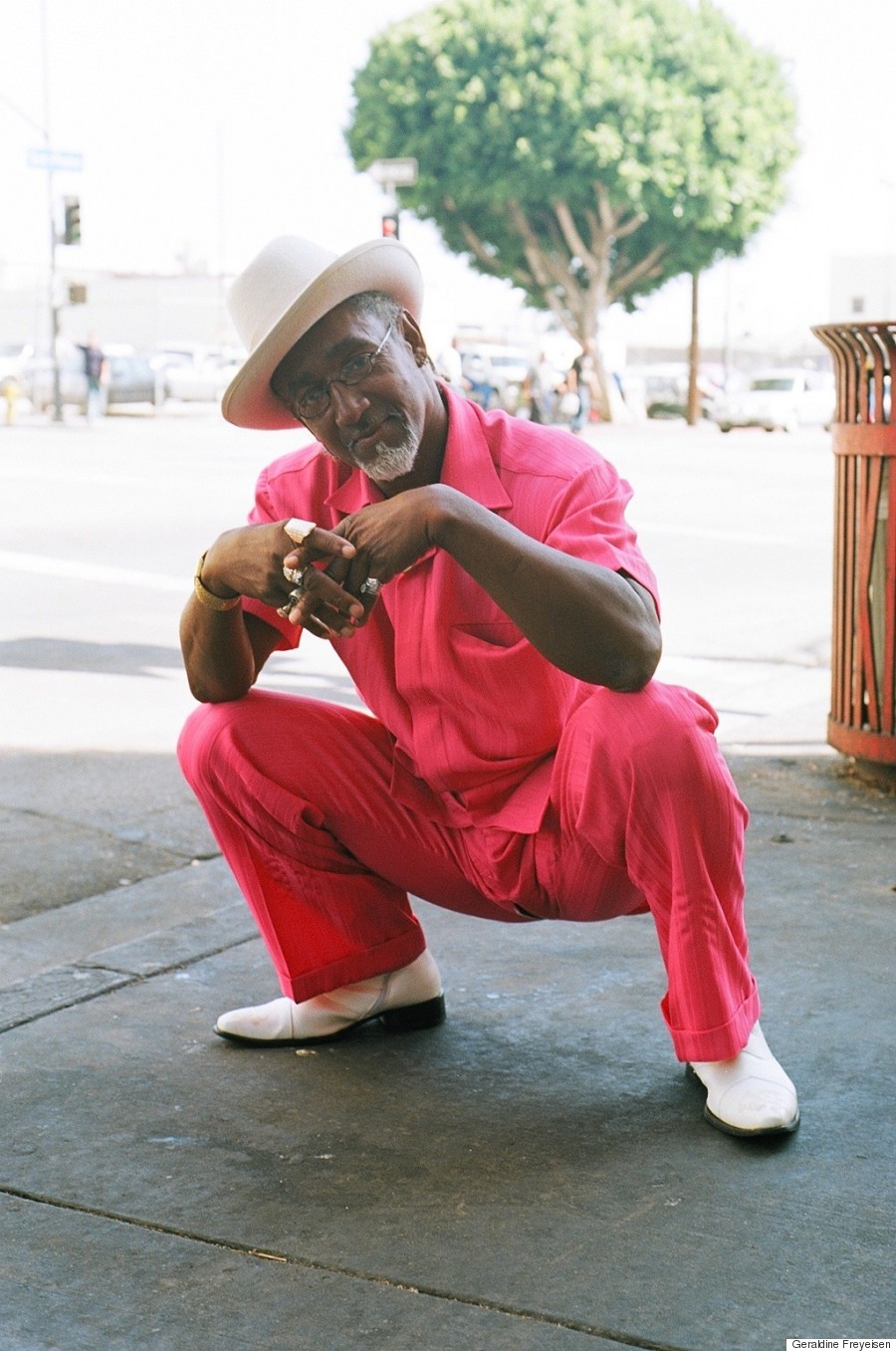 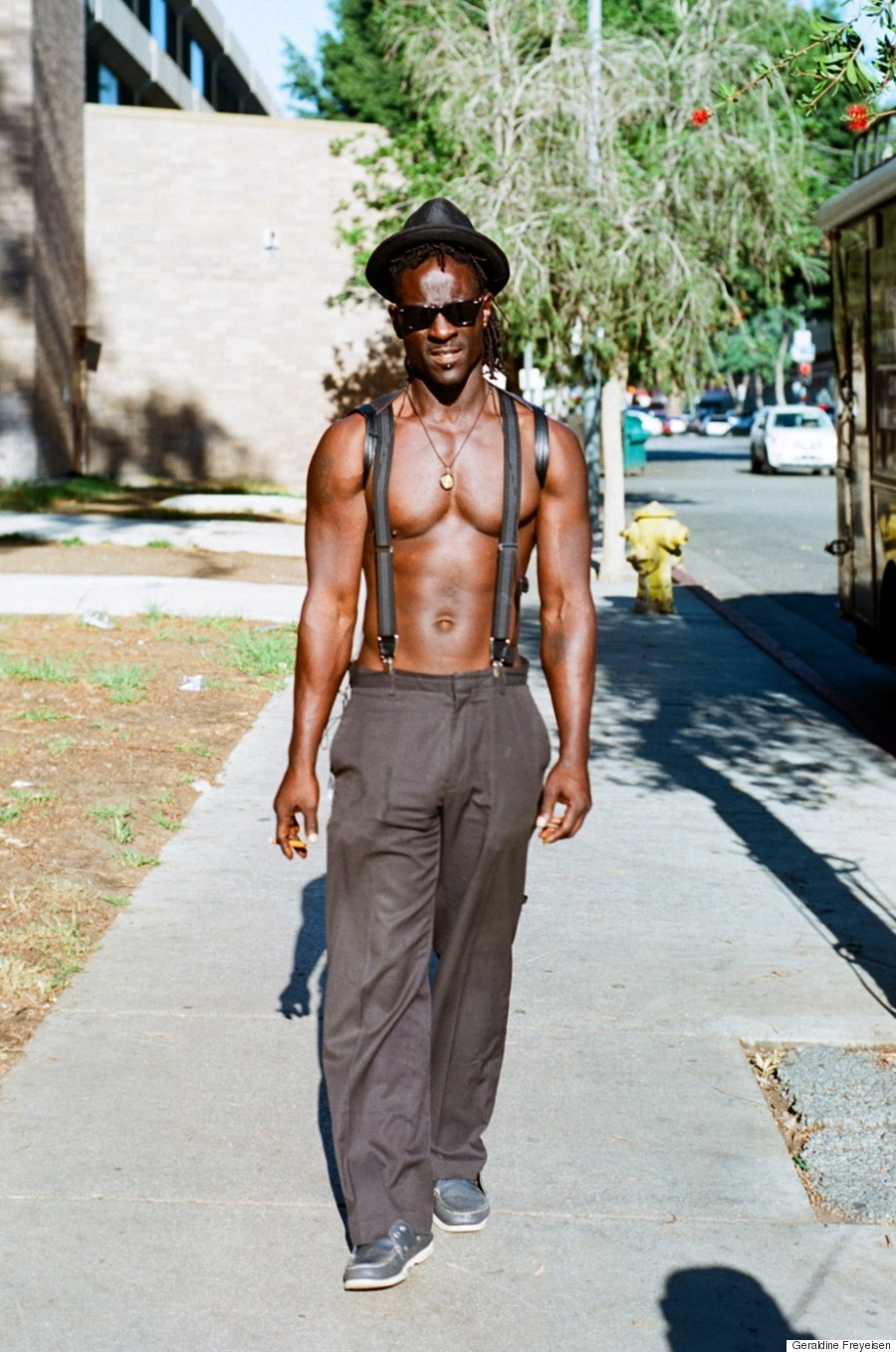 Freyeisen is typically Parisian, with a chic nickname -- Gigi -- a soft French accent and daring style. Wearing a denim jumpsuit that she made, high tops and a red chain link belt, she practically floats up the stairs of the old building where she recently began renting a studio for $400 a month.

Even though she lives about nine miles away in West Hollywood, Freyeisen spends most of her time here -- taking photographs and working with Skid Row artists on The Swagabonds fashion.

Just a block away, over 17,000 homeless people have set up a world within a world in downtown Los Angeles. Skid Row’s four-mile district includes tent camps, homeless shelters, churches, low-income housing and many non-profits that are there to assist the community. While many have been homeless for 20 or 30 years, the neighborhood is also made up of artists, social workers and activists.

If Freyeisen seems like an outsider, it’s because she is. Her background is in luxury branding, after all. She worked for a niche company in Paris and was responsible for telling the story behind cosmetic brands, and in some cases, choosing the names of many perfumes. After seeing the documentary “Lost Angels,” Freyeisen says she immediately became interested in learning more about Skid Row and wanted to meet the people who lived there.

About a year ago (she had already been living in Los Angeles for three), she found a job assisting on a that was filming in Skid Row -- about women recovering through drama therapy -- and slowly began to meet her subjects.

“For weeks, I would never take photos,” she said. “I would walk around and stay in the park. Because the documentary was very involved in the community, I would go to events and get to know people.” 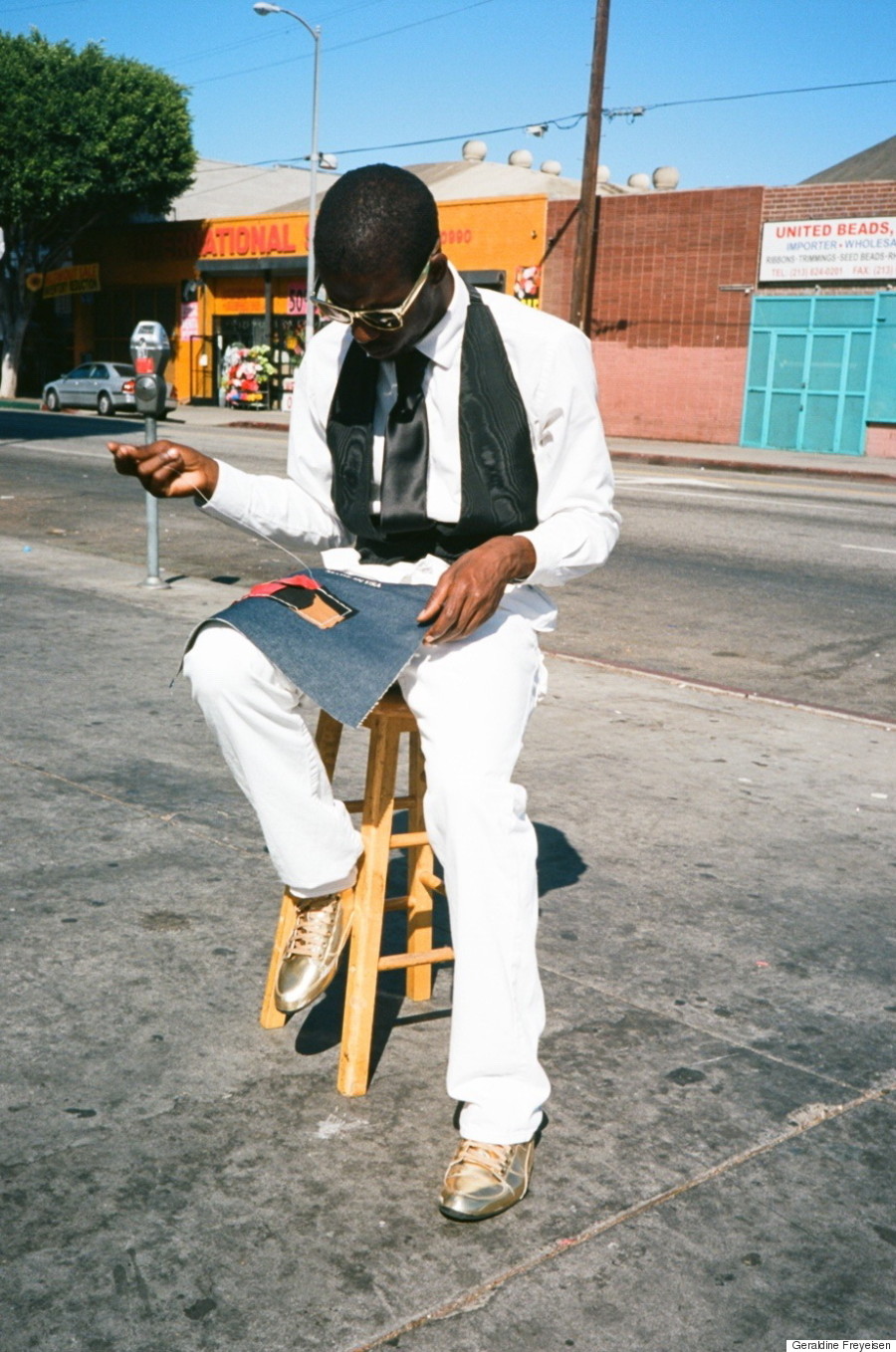 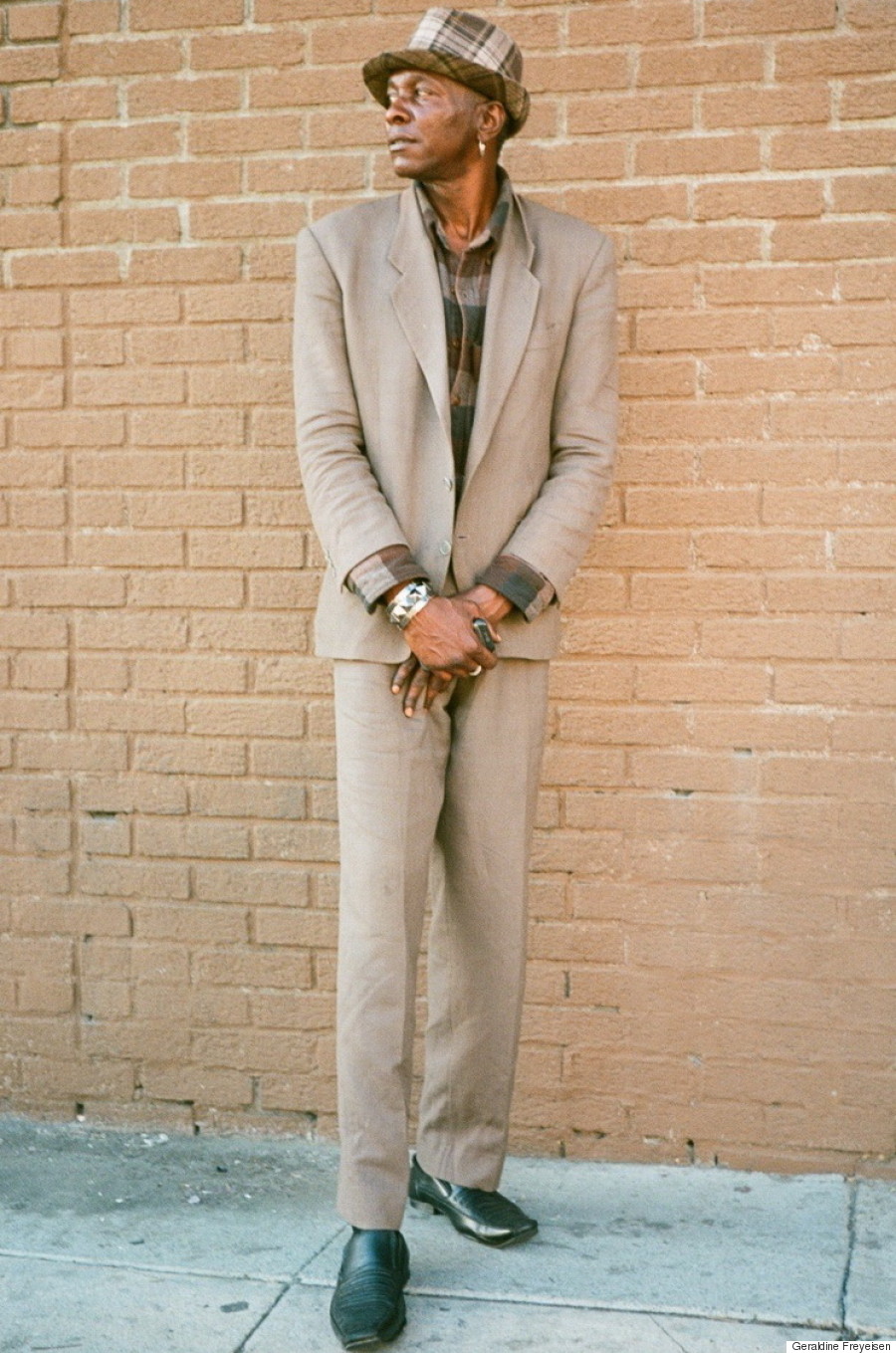 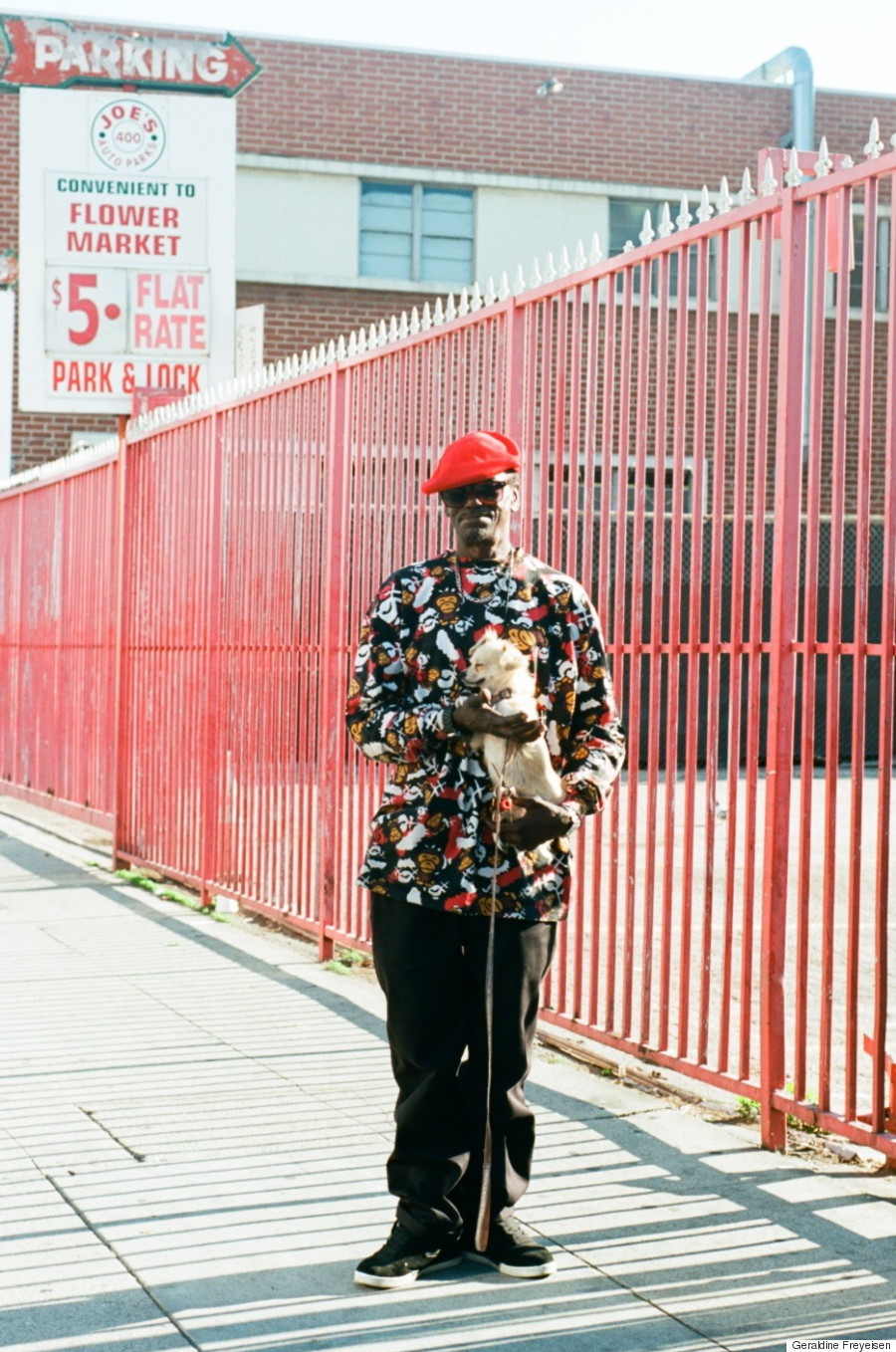 She never advertised herself as a photographer. Keeping her camera always in her bag, Freyeisen says bonding with the residents of Skid Row was a long process and something she didn't want to rush. It's all about your attitude, she said. What are you about? Do you have genuine intentions?

Freyeisen grew up with a mother who was deeply drawn to helping others. As a little girl, she would see her mom routinely provide food for homeless individuals and sex workers and even open their home up to Parisians recently out of jail.

"[My mother] passed away and I realized I am a lot like her," she said.

Being foreign in Skid Row played its part in helping her form relationships, too: “People were curious, in a good way." 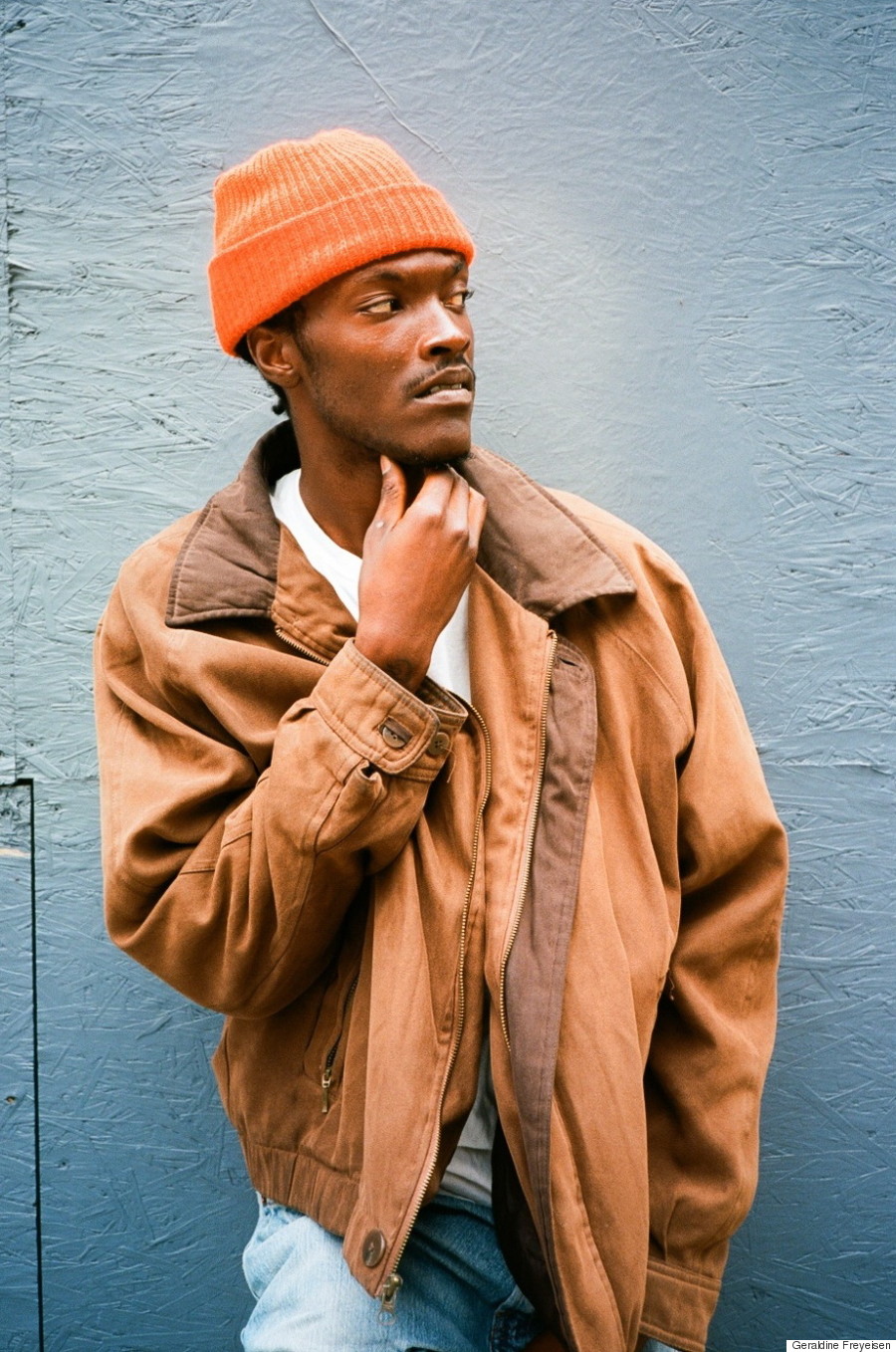 Positive news is rarely reported out of Skid Row. But Freyeisen’s vibrant photos illuminate something inspiring and important: regardless of one’s circumstances, the human spirit persists.

The issue of whether or not her photographs are exploitative comes up in our conversation. She, a white woman, points out the difference between exploiting the poverty that is on many corners and showcasing the talent in the neighborhood. By photographing personal style, she says she is highlighting something the subjects are proud of -- what they decided to wear that morning. 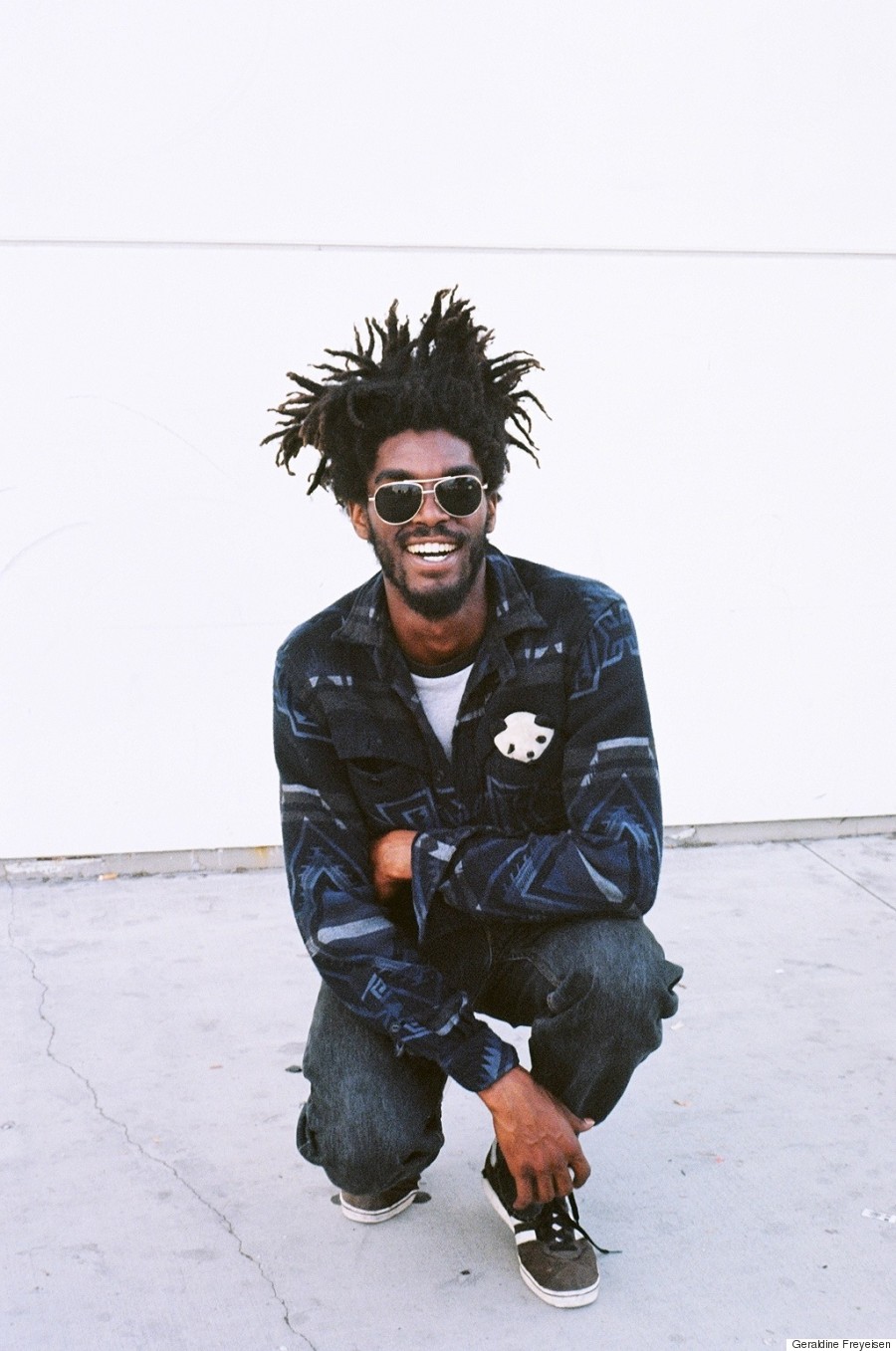 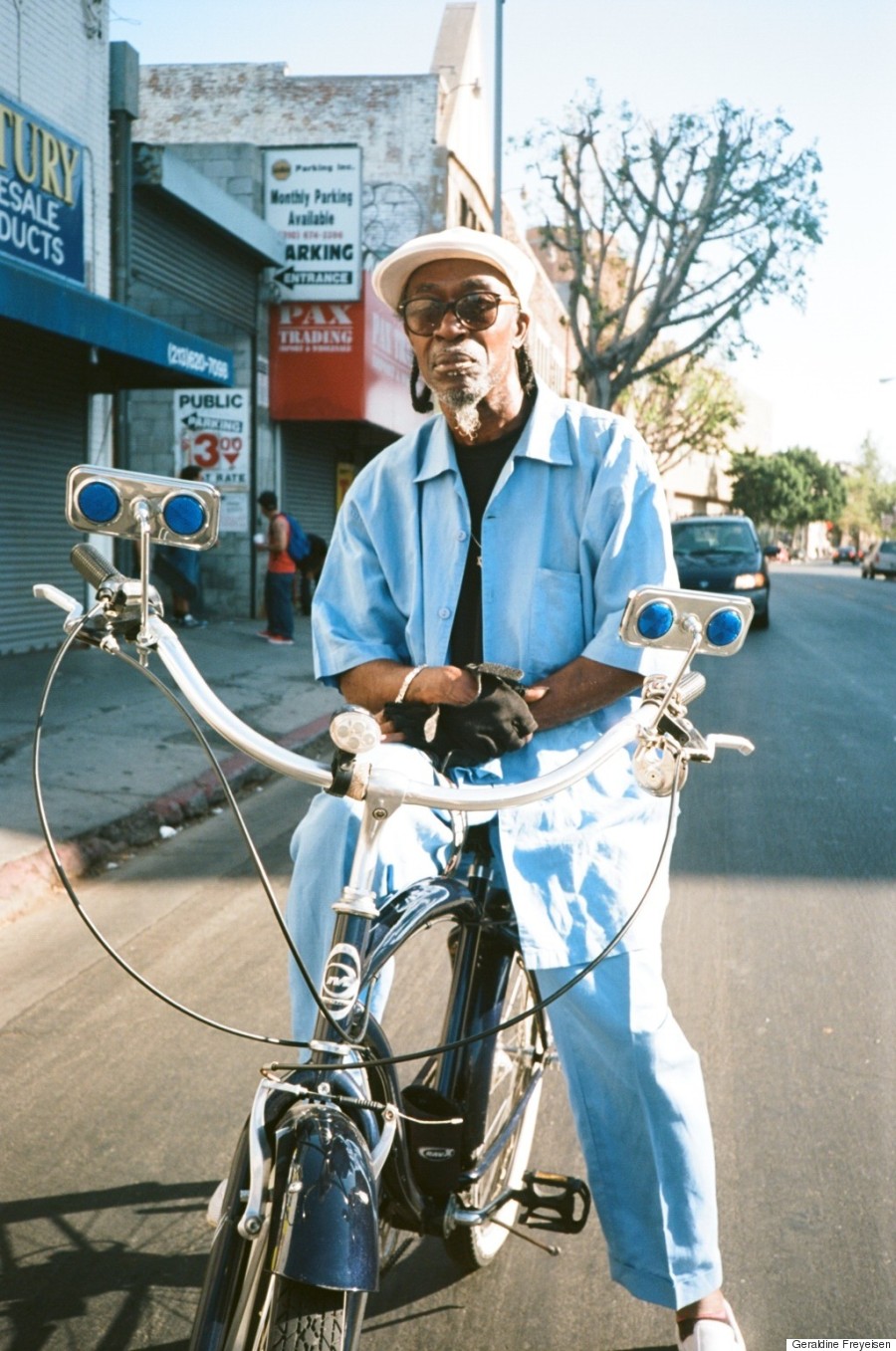 So far she is collaborating with six artists on the fashion project -- two young street artists, a young Skid Row community activist, Donald the Flower Man, a street musician and another woman who both live in the low income housing program in Skid Row. None of them have any formal design experience.

Freyeisen meets with the different artists in her studio (where many come to paint or work) and they sit down one-on-one to look at the art and decide together how it will work best on clothing, she said.

“I try as much as possible to involve everyone in the production. To me, the goal of this project is really to showcase and empower Skid Row artists so that -- when they want to -- then can start their fashion business on their own.”

She says that the artists already involved in the project are very excited.

“They also feel empowered to do more,” she said. “They’re excited to the point that sometimes it wakes me up in the middle of the night; I planted so much hope and dreams that I can’t disappoint them. It’s not an option.”

The two young street artists that she’s worked with (they do paint splattering on jackets) have already started making their own clothes separate from Freyeisen’s project. 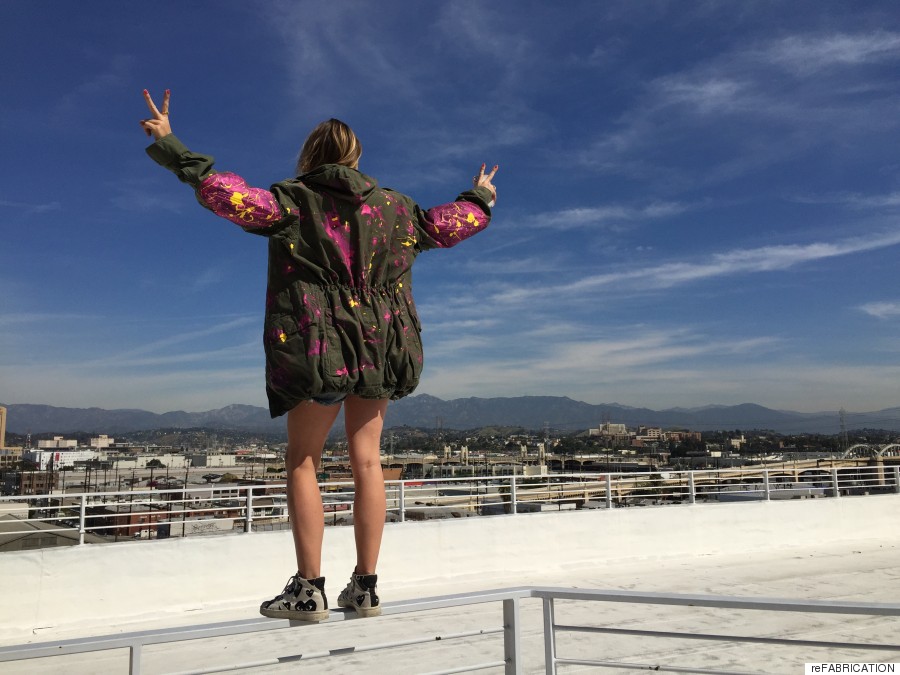 “We try things, we explore together, we see what works," she said. "And if they want to, we can keep on collaborating. If they want to do things on their own, I encourage them to. It’s supposed to be really open, with people coming in and out -- and new people coming in.”

In one of her photos, a man confidently wears paint-splattered jeans, Nike sneakers, hologram sunglasses and a hard hat.

In another, a man with a large afro dons a disco shirt, black and white tuxedo shoes and sits atop an old suitcase while holding a cane. 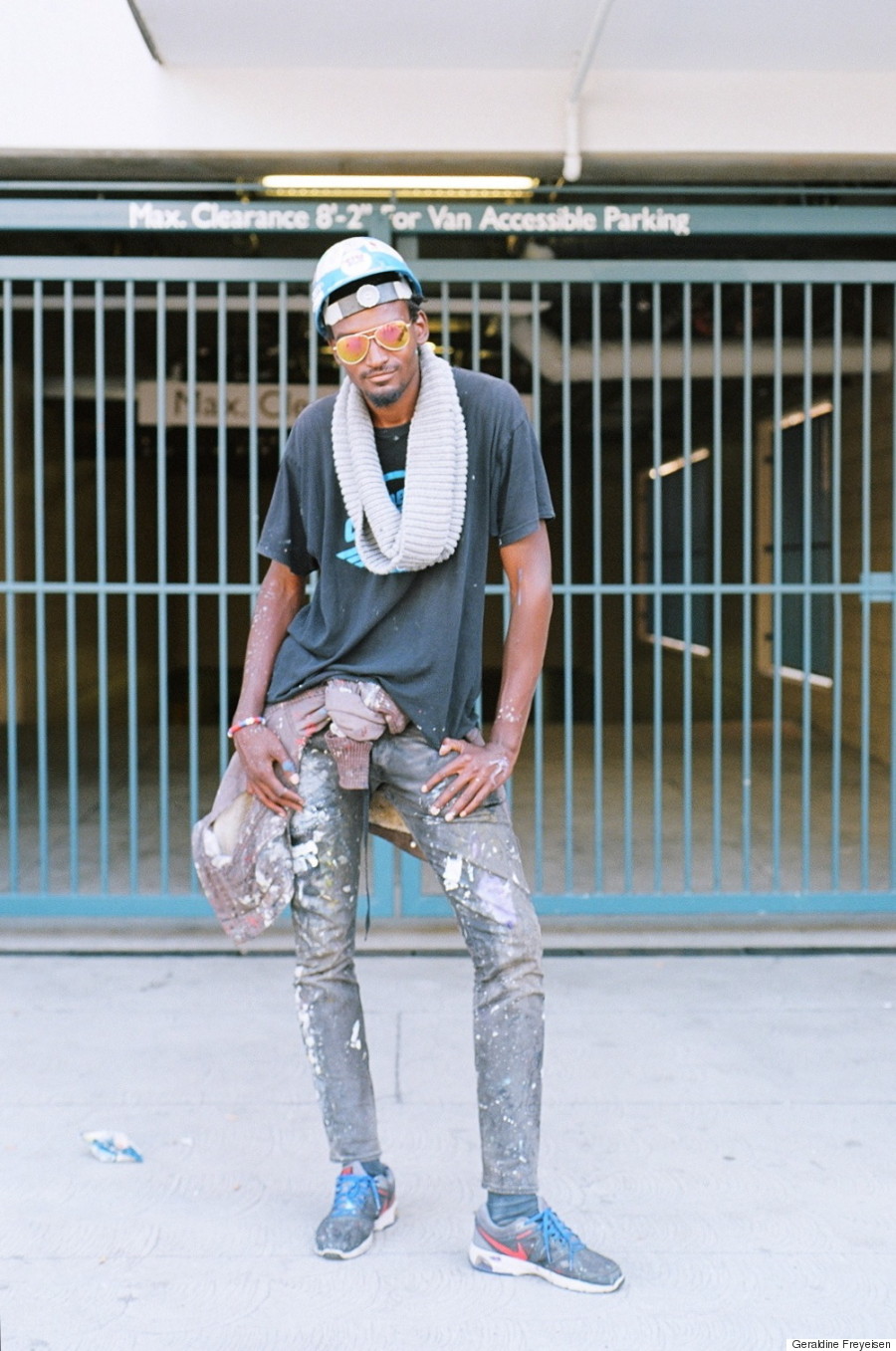 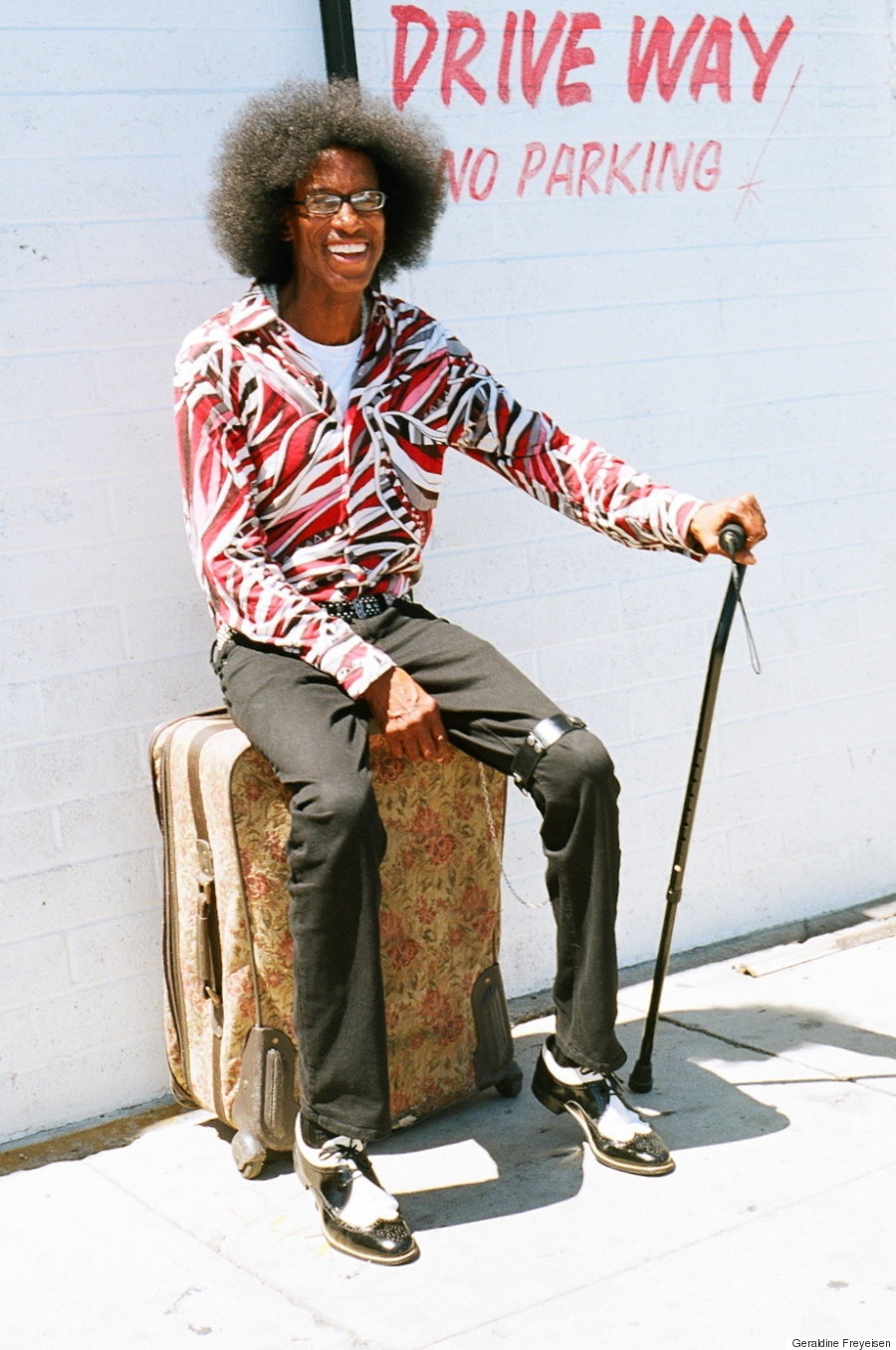 “I walk so much here that I know someone on every corner. Everyone has their spot,” Freyeisen said. “It’s like a village. Everyone waves at each other. Even though from the outside it looks like chaos, there is such a form of family here. With hate and love and everything.”

Drug use and violence are simply realities of the neighborhood. The Los Angeles Police Department is currently under fire for the recent shooting of a black homeless man. A bystander caught it on video and Los Angeles mayor Eric Garcetti has begged the community to wait to pass judgment until an investigation is completed.

When Freyeisen’s camera is out, she works fast. “You feel the vibe and trust your intuition a lot. I’m totally aware of my environment," she said. 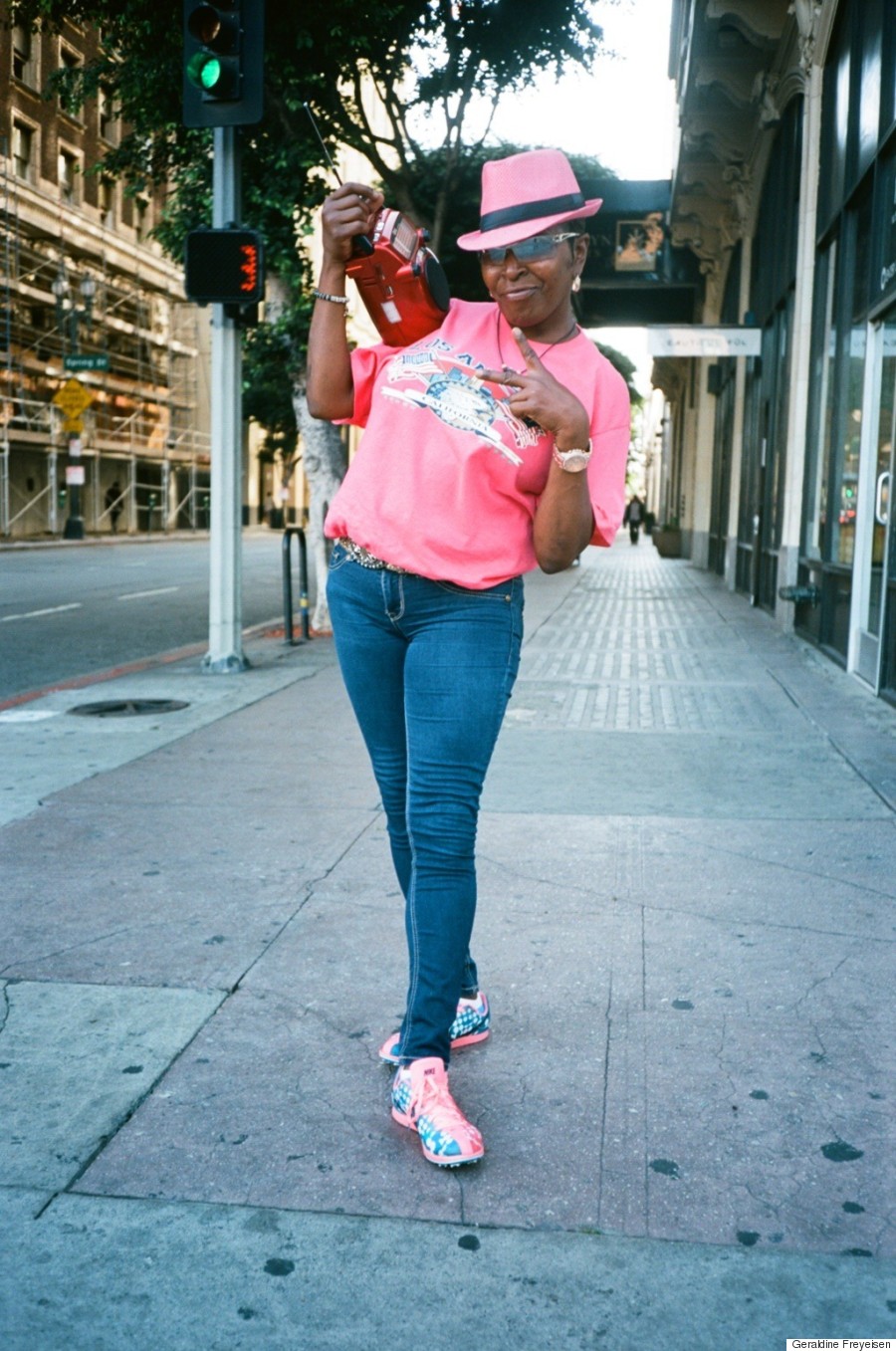 It's obvious when looking at Freyeisen’s photos that far more men are featured than women are. "Women are tougher here," she said. "It’s a male environment. I have girlfriends who work in finance and they have to be tougher because it’s a man’s world. It’s the same here. With all of the drugs and the violence ... They have to be." 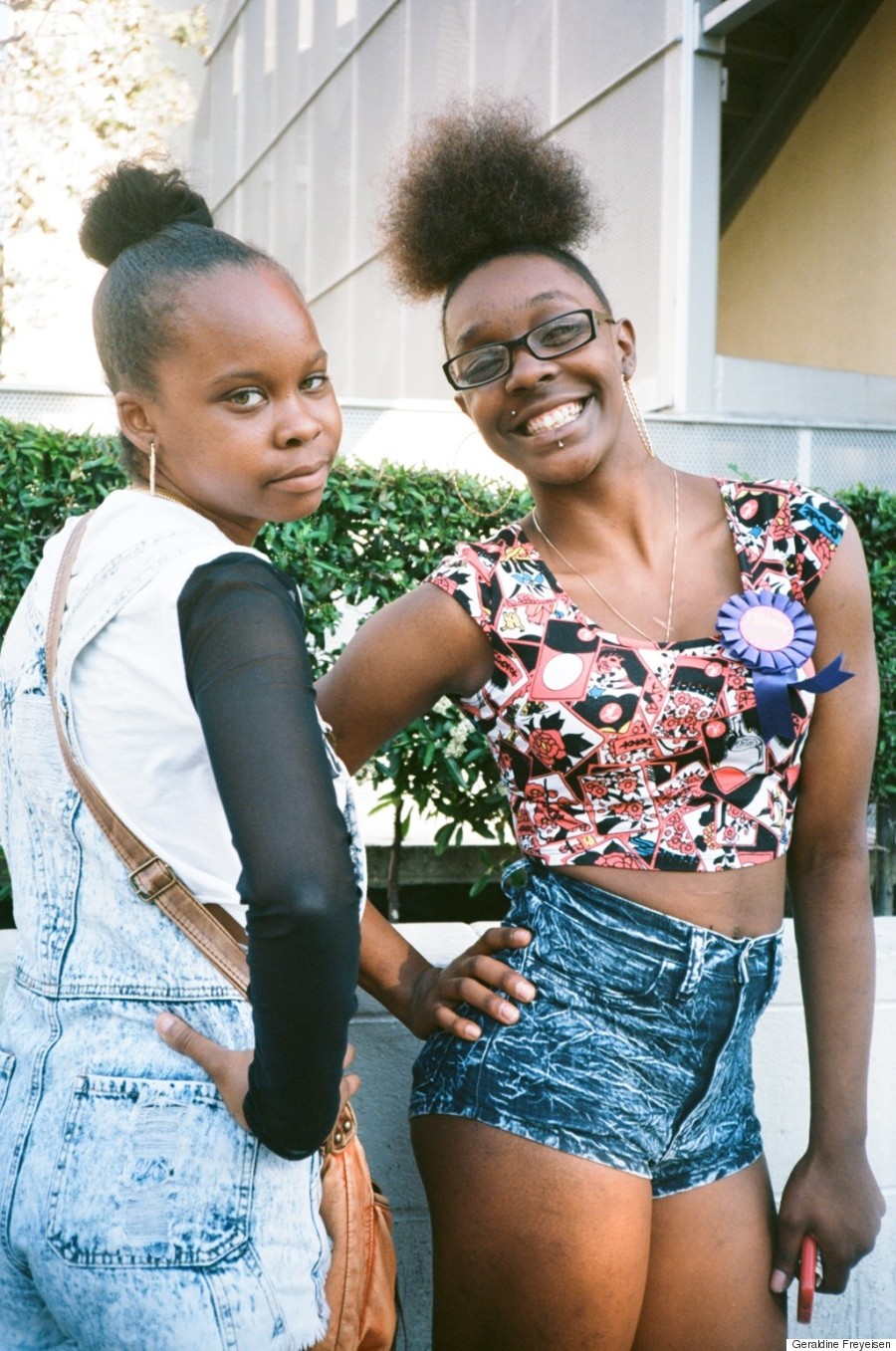 The new sewing machine sits in her studio next to a framed quote by Martin Luther King Jr. that reads: “The time is always right to do what is right.” Above the sofa rests a vision board with clipped images for inspiration for the clothing line.

Freyeisen says she is planning to go back to work in branding so that she can pay the bills and still work on her new project. Noting the name of the Skid Row fashion brand -- The Swagabonds, a combination of "swag" and "vagabond" -- Freyeisen said, “The link between all these people here is the swag. That’s for sure.”

Freyeisen stitches the words Skid Row across the backs of many jackets. “It’s really a way to start the conversation. What I like so much about Skid Row is the pride people have. That’s why I want to use this name."