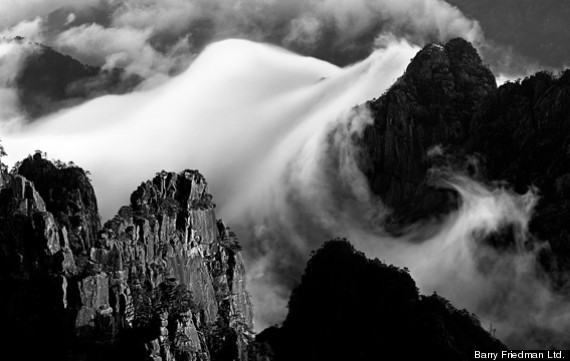 The range, also known as the Yellow Mountains, have captivated Chinese artists for hundreds of years; Wusheng's photographs house echoes of traditional Chinese ink drawings within them. Wusheng, who grew up among the fog-shrouded mountaintops, presents the natural forms as a site of temporary infinity with his deep devotion to his subject and craft.

Art history professor Wu Teng described the mystery of the range's silhouette in a gallery essay: "The image is a symphony of dark and light and of substance and emptiness. The strange, vertical peak emerges from a gossamer mist that veils a deep abyss. Its impressive height is suggested by the silhouette of tall trees in the foreground, yet is dwarfed by the huge precipices looming above it."

See a preview of the exhibition below and let us know your thoughts in the comments.