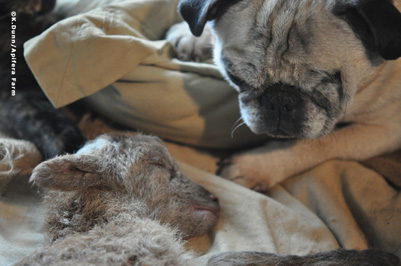 She weighed just 4 pounds. I had secretly named her Little Daisy, which is a mistake. One should never name a lamb before a few days; you learn that. But then again, maybe this one time it was important that I name her. Maybe something much bigger than me, or Apifera Farm, knew what was in store for that little creature and knew naming her would mean something to both the dying and the watcher of the dying.

Everything seemed fine at 7 a.m., roughly 19 hours after Daisy's triplets were born. While it is always exciting to see triplets, it is entwined with an element of dread. Many issues can arise with them: weak lambs, not enough milk, a weak ewe or milk fever. We've had a healthy set of triplets in the past from Rosie, but lost all six triplets in '09.

So with the triplets looking good in the morning, all milking a bit, tails wiggling, I felt okay. Daisy is an excellent mother, too. Maybe that was one of my mistakes, not taking charge right away and tube-feeding the tiny little ewe, only 4 pounds. I check my lambs every two hours the first day for their tongue temperature, and if it's warm, I'm happy.

What happened from 7 a.m. to 9 a.m. is a secret of the universe, something no one will truly know. But I found her listless. The big boy was eating, the middle brown boy was sleeping. Sleeping day-old lambs can look dead, believe me. So at first when I saw her, I didn't think anything was wrong. But I decided to give her another squirt of vitamin drench because she was so small, and her little body was like a slightly alive rag doll. I rushed her into the house, encouraging her to stay with me. I tube fed her and was careful not to get it into her lungs. I had initial hopes, but I knew she wasn't going to make it. And she didn't. She died surrounded by a hospice team consisting of an old one-eyed pug, a concerned labrador and a kitten that knew only too well what it meant to be saved.

After she died, I decided to tube-feed both boys as a precaution, thinking it might be a milk issue. Arriving at the barn, the brown boy was now looking dopey, but better than his sister had. I thought I could save him. After tubing him, I knew he wasn't going to make it, so returned him to Daisy. He died soon after.

This is part of shepherding. I'm proud to say that I was calm and remembered how to tube a lamb without panic. I also told them to "go on now," which I think is a gift to the dying. I had tried, and I knew they both tried as much as their bodies could.

As the little lamb ewe lay near the fire, with her hospice team nearby, I went for my camera. I wondered if it was ghoulish to photograph the scene of near-death. But I wanted to and wondered why I wanted to. I've been thinking of that all day: why did I need and want to document the moment, and was it worthy of her short life?

A creature of any kind, any kind, can touch a human life and reach deep into their best parts and say, "I know I'm little and dying, but you cared to take pictures of my beautiful ears. You let me be warm. I could hear you, too."

Her ears were so beautiful, much like the hair of one of my felted creatures.

To see the full slideshow of the all the photos from "Hospice for a Lamb," click here.

More:
death-amp-dyinghealthy livingPhotographyfarm animalsfarm
Newsletter Sign Up
The essential guide to taking care of your mind and body
Subscribe to HuffPost’s wellness email
Successfully Subscribed!
Wellness delivered to your inbox