Photography changed everything in the visual arts -- and it's changing again. 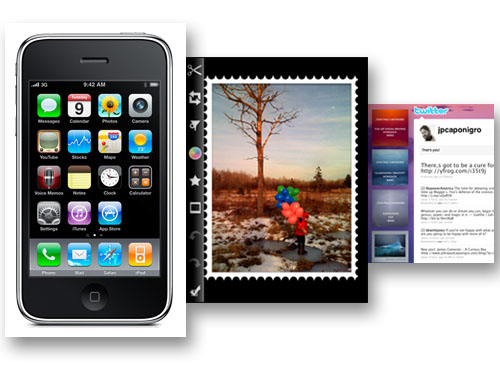 Photography advanced the objectives of representation. It provided extraordinary detail rendered with exceptional precision; never before had images looked so life-like. Photography did this so well, it spawned a reactive move towards abstraction in the plastic arts -- drawing, painting, sculpture, etc.

Photography also provided views into the world as we had never seen it with our naked eyes; freezing the motion of running horses, speeding bullets, shattering glass, and dripping liquid; zooming into the microscopic worlds of insects, crystals, the human blood stream, bacteria and viruses; zooming out to provide distant views of the earth, moon, planets, sun, stars, and even distant galaxies; opening a window into spectra invisible to the naked eye, infrared and x-ray are just two. Because of photography the world of images became more like the way we see it and our understanding of the world itself became less like the way we see it.

Photography changed our vision of the world by providing more access to more images drawn from more places and times in the world than ever before. Photography enabled images to be copied and mass-distributed. The media-sphere was burgeoning.

Photography changed the dominant way images are made -- and we could all be a part of it. This was, perhaps, the most important development of all. Photography democratized making images. Making and distributing images became easier, faster, and less expensive.

Photography changed history. It changed events and how people reacted to them. It changed how history itself was made, recorded, stored, and retrieved. Its history is comingled with our history.

Photography's nearly 200 year history has been exciting. There are many great moments in photography's history. Here are a few important ones. Upon its invention, in the early 19th century, portraits were no longer limited to the wealthy; people with average economic means could commission portraits from professional photographers for relatively affordable prices. Almost anyone could possess a photograph. In the late 19th century, companies like Eastman Kodak manufactured affordable cameras, ready-made film, and provided processing and printing services. Suddenly, average citizens could easily take photographs and have them developed and printed within days and later hours, at increasingly affordable prices. ("You press the button. We do the rest.") Almost anyone could be a photographer. In the mid 20th century, Polaroid invented a camera that produced a print immediately after exposure, self-developing within a minute, before the photographers eyes, in broad daylight. Almost anyone could produce prints. In the final years of the 20th century, the first cell phones capable of producing and distributing photographs in seconds, for almost no cost, became available. Almost anyone could mass distribute photographs.

Photography's constant move towards ease, speed, economy, and ubiquity continues today and it has recently reached a new critical apex.

In the first decade of the 21st century, Apple released the iPhone (2007) and a host of independent applications followed, designed to preview, make, process, enhance, and distribute photographs in seconds. Photography just got easier, faster, less expensive, and more ubiquitious. It's not that the iPhone does anything that can't be done with other devices, but now doing those things is faster and more convenient. It's not that other cell phones can't do similar things, but none of them do so much, so well. That the iPhone does so much, so easily, so well, comes to hand so readily, and provides such connectivity (while performing a much larger array of other functions) is what makes it truly extraordinary. Never before has this much functionality converged in a single portable device, one that fits in your pocket or on your belt. This convergence of functionality creates extraordinary possibilities.

When did you discover you can do this?

In about a minute you can make, process, comment on, and distribute an image. It can take you a similar amount of time to do the same with someone else's image.

If you haven't done it yet, try it now. I just did. Doing this will change the way you experience and think about photography.

The immediacy of the process is extraordinary. For better and for worse, it can lead to greater spontaneity. It's an exceptional tool for enabling creative discovery and communication. It's sometimes highly informative and always highly entertaining. If you use an iPhone (or another smart phone)... It will change the way you make photographs. It's likely that it will change how you interact with and what you do (or don't do) with your photographs - and perhaps other people's photographs too. It may even change the kinds of photographs you make. It's done all this for me. In short, smart phones change photography. And photography changed our world.

In future posts, I'll explore many aspects of this brave new world of possibilities -- tools, techniques, practices, and uses for cell phone photography. I'll highlight new opportunities and provide perspective. I expect to challenge my understanding of what photography is and can be and the many uses it can be put to.

I look forward to your comments as we navigate these changing waters together.

Read about the history of photography here.

Read about the history of the camera here.

Read about the history of the camera phone here.