Over the last ten years, the art of photography has undergone a sex change. The rather masculine act of capturing or "shooting" a moment ("the hunt") with a sound subject and composition has evolved into one where the real art comes in the editing, not the capturing. The initial "kill" gets skinned, dressed and prepared for a meal by the wonderful witchy post production tool known as Photoshop. The photographer, like a woman putting on make up at her vanity before going out for the evening, edits reality: the best features and colors are enhanced and sharpened, and a new, hyper-realistic art form, with a nod to surrealism of last century, is born.

Of course, there's no question that a digitally manipulated photograph cannot compare to the majesty of a single moment captured 4 x 5 or 8 x 10 film. In truth, manipulating images with lenses or the dark room has occurred since photography was invented. But the difference is that working in Photoshop overtakes the camera as the instrument of creation. Some art schools and galleries still hold a fundamentalist/purist view that such imagery is not authentic and therefore not art. But the reality is that labs are harder to find, Leica is out of business, and Photoshop's sorcery are shaping a new aesthetic which is finally being taken seriously as an art form and is injecting itself into the mainstream culture. Limited editions by some artists such as Loretta Lux (below) fetch up to $100K per print and her style was happily ripped off by none other than Van Cleef and Arpels for their recent ad campaign. 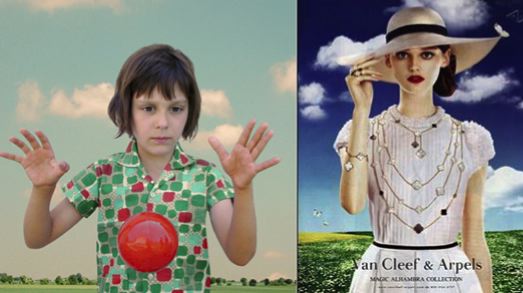 The rise of this aesthetic trend is wonderfully chronicled in last week's New York Times article on Flickr, where the writer documents the exploding popularity of photostreams by artists who manipulate their photographs rather than the ones who upload shots taken "as is." In fact, when one prankster uploaded a picture by Henri Cartier-Bresson of a bicyclist riding past a circular stairway as his own, unwitting commentators pilloried the "photographer" saying "When everything is blurred you cannot convey the motion of the bicyclist.... "Why is the staircase so 'soft'? Camera shake?" and "Grey, blurry, small, add crop."

As a painter, the first time I experimented with Photoshop, I thought I had entered a secret world where anything was possible at an unimaginable speed of realization. Articulating what I could see in my mind instantaneously and in any variation made me feel as if I was handed magical superpowers like becoming invisible or the ability to stop time. More than just an enhancer of images, like making eyes bluer or elongating a supermodel's neck, Photoshop is an outstanding collage tool. Making collages is most painters' first art school exercise-- to cut images from a random stack of magazines and then assemble it into as a maquette for a painting. For this reason I find the name "Photoshop" woefully inapt, like it should be called "Painter's Heaven" or "Wonderland's Magical Cabinet of Potion's Where Anything Can Happen," but that's perhaps too long.

But like any art and especially in this new "transgendered" form of photography, there is a fine line between over-manipulation, and a tilted authenticity. But when it's done right, it opens the narrative field and transports the viewer into another reality where double takes are welcome. One such photographer is Tom Chambers. In his "Prom Dress" series of younger women donning tulle in strange and disjointed natural settings, he practices his craft in Photoshop to a haunting hyper-realistic extreme that warrants close attention. 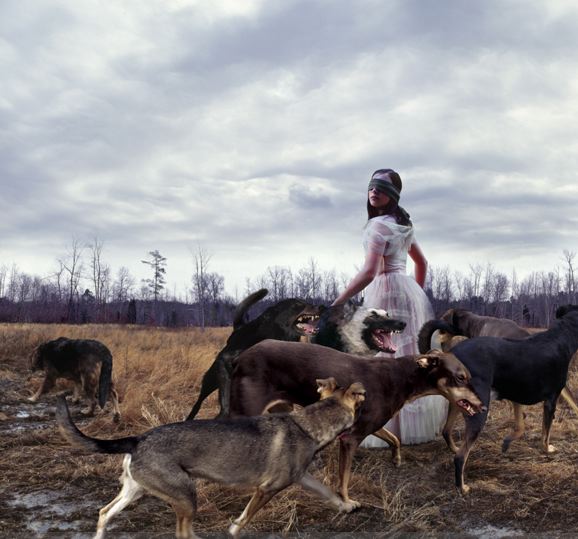 Kimberly Brooks: Tell us about your most recent body of work and how you use photomontaging and photography to express it.

Tom Chambers: Most of my work is very influenced by Mexican religious art. Years ago I traveled through Patzcuaro, Mexico and came across a basket full of ex votos (or retablos) painted on tin. 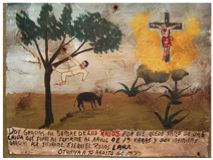 Ex votos are Mexican folk art paintings often created on tin, copper or wood. They illustrate an occasion when in response to a prayer for help or guidance, the prayer was answered or a miracle occurred. These hand-painted miracle paintings honor the power and mercy of the saints. The subjects of ex votos range from common daily occurrences to truly dramatic events. All ex votos contain a picture of the miracle, an image of the saint to whom the ex voto is dedicated, and a brief description of the miracle. I had been working on photomontage photography at that time, but upon seeing the ex voto paintings, I thought, "Why not push my work in a similar direction, create photographs with magical or religious overtones." Later, I discovered that this type of artwork is a genre commonly known as magic realism. 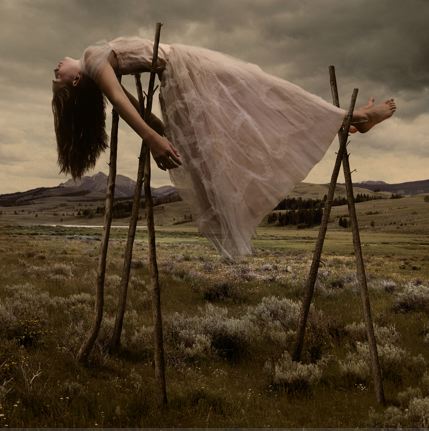 KB: Can you show us an example of where you've used several different images to create one? I would like the viewers to see the source material and how it was turned into its final incarnation.TC: Okay, below is an image derived from three different sources. I have been intrigued by Native American Indian burials, particularly ones using burial platforms in the desert. So I decided to create an image involving a burial platform which would have religious overtones. Because I wanted the viewer to feel the power of nature over humankind, I created a sacrificial image, as if the subject was presenting herself to the heavens. Using a prairie backdrop taken in Yellowstone National Park, I positioned a girl in a gown whom I had earlier photographed propped up on two stools. Then, adding photos of poles made it appear as though she was propped up off the ground. This final photomontage was fairly simple to create, but resulted in a powerful image which was selected as the 2007 Santa Fe PhotoArts poster.

Pieces of the Process: Chambers combines his photographs of water and salmon to create the finished "Plymouth Rock" below. 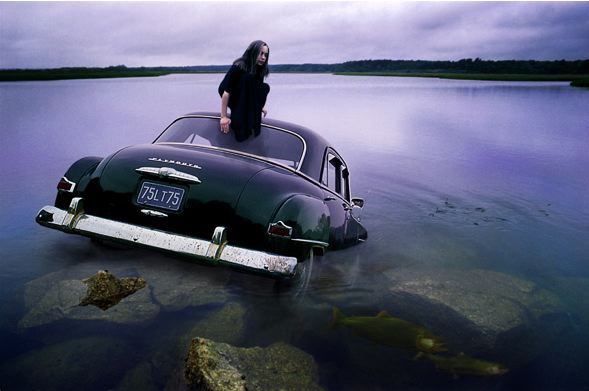 KB: How do you start the process? Does it always start with the photograph or do you draw first?

TC: I initially sketch out a concept or idea I have for an image. Then, I photograph each piece of the image using a medium format film camera, generally a Mamiya Pro TL or a Fuji Rangefinder, being careful to make sure the light intensity and direction are similar in each of these shots. This process may take as much as a month depending upon how quickly I am able to get all the shots and sort through them, picking the ones which work best together. "Pieces" of the final image might include the landscape or background, often shot in sections, as well as the sky, a human figure, an animal, or another object. The processed film is scanned at a high resolution, approximately 80 megabytes per frame. Then, using Photoshop software with a Macintosh computer I combine each "piece", thus creating the final image. Lastly, the image is printed with an Epson printer using archival pigment inks and paper. 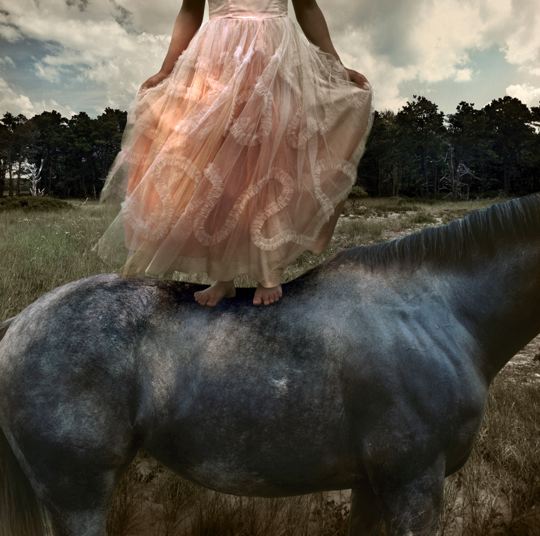 KB: Ah, it is clear to my eye from the quality of your images that you're capturing your source material on film before going digital. What artist in history inspires your work?

TC: Andrew Wyeth... Although his work might be criticized for its overt beauty, the work contains strong emotional currents, symbolic content, and an underlying abstraction. I appreciate his color palette (browns and blacks), use of texture, and winter scenes as backdrop. 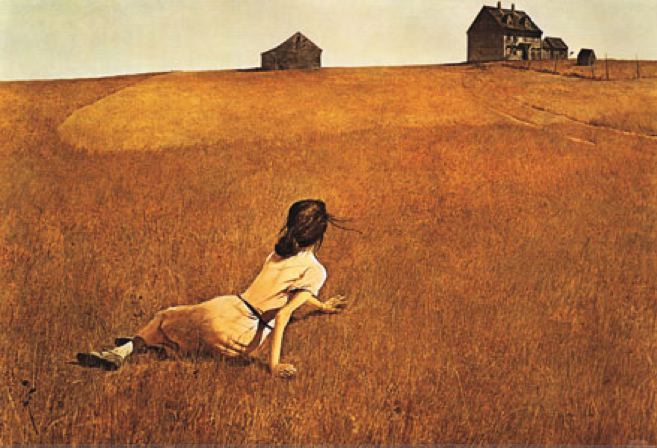 KB: I've always found it sad that overt beauty gets criticized. Indeed, I find your works beautiful. What mood do you hope to impart to your viewers when they see your work.

TC: I would like my work to elicit an emotional response, a moment when the viewer connects, and the story unfolds from within--based on one's identity and feelings. I am not asking my work to be believable in any literal or representational way, but I am hoping it encourages the viewer to consider my work on an emotional level.

Tom Chambers was raised on a farm in Lancaster County, Pennsylvania, and at age 18, he joined the Navy and was immediately sent to Vietnam. After his military discharge, he spent five years hitchhiking around the U.S. and Canada, as well as working his family farm with his four brothers. Later, he attended art school in Florida and eventually moved to Virginia, where he found work as a graphic designer. He began experimenting with photography using the computer equipment available through his work. For the past twelve years he has created photomontages, using photos taken during travels throughout the U.S., Canada and Mexico. Recently Chambers' work has been featured in large Expos such as Photo LA and Photo Miami and Art Madrid (February 2008). In 2007, he had solo shows in Santa Fe, Seattle, and L.A. Currently Tom Chambers is represented by several galleries including "Photo Eye" in Santa Fe, NM, "Wall Space Gallery" in Seattle, WA, "Chase Gallery", and "Galeria Clave" in Murcia, Spain, exclusively for Europe. His current show in Boston is at the Chase Gallery and opened May 2nd and runs through the month of May. Chase Gallery, 129 Newbury Street. 617-859-7222.