Today's most innovative artists are taking not paint and chisel but science and technology as their media, to represent nature both seen and unseen. They are creating works radically different from any that have ever gone before and that may even change our perceptions of the world -- truly the new avant-garde. I call this movement "artsci."

The earliest form of artsci, Biology-Influenced Art, investigates the body and the radical changes it is likely to undergo in the 21st century, as I discuss in my new book, Colliding Worlds: How Cutting-Edge Science is Redefining Contemporary Art. 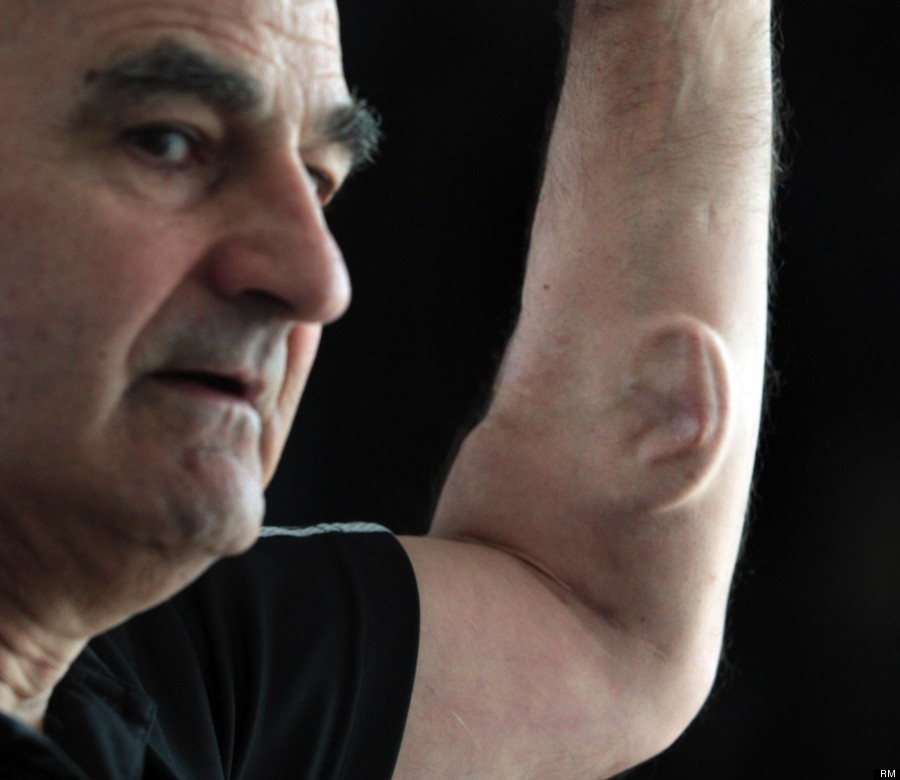 The performance artist Stelarc, a famous proponent of "body enhancement," is actually growing a left ear on his left arm. The ear is made up of Stelarc's own stem cells woven into a biodegradable polymer frame. A Bluetooth device inserted into the hole in his arm will hook Stelarc up to the web. 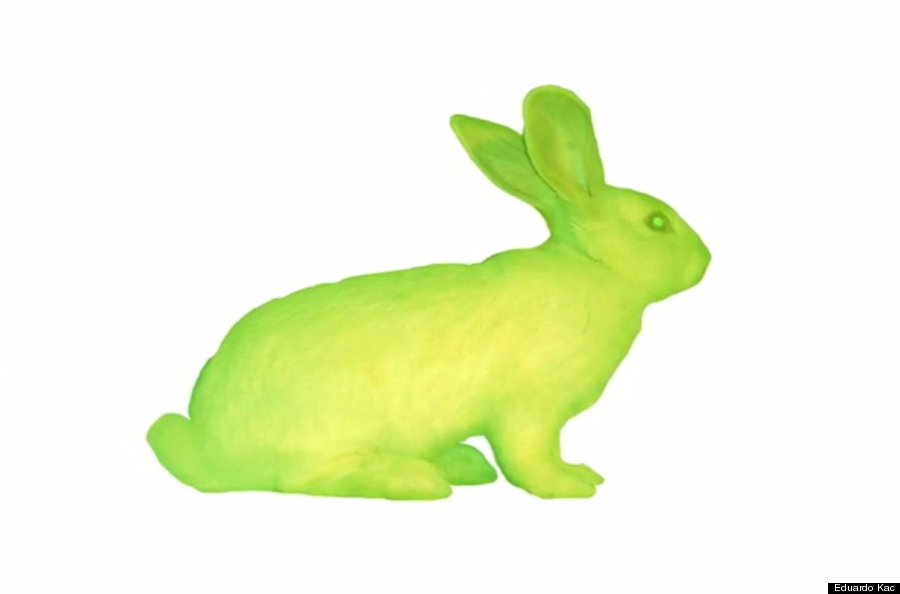 Eduardo Kac's Alba the white bunny underwent gene modification to make it glow green when blue light was shone on it, using a green protein gene from a jellyfish. Thus Alba became a creature that does not exist in nature, which led to a lively debate on the ethics of gene modification.

The second oldest form of artsci is Physics-Influenced Art. 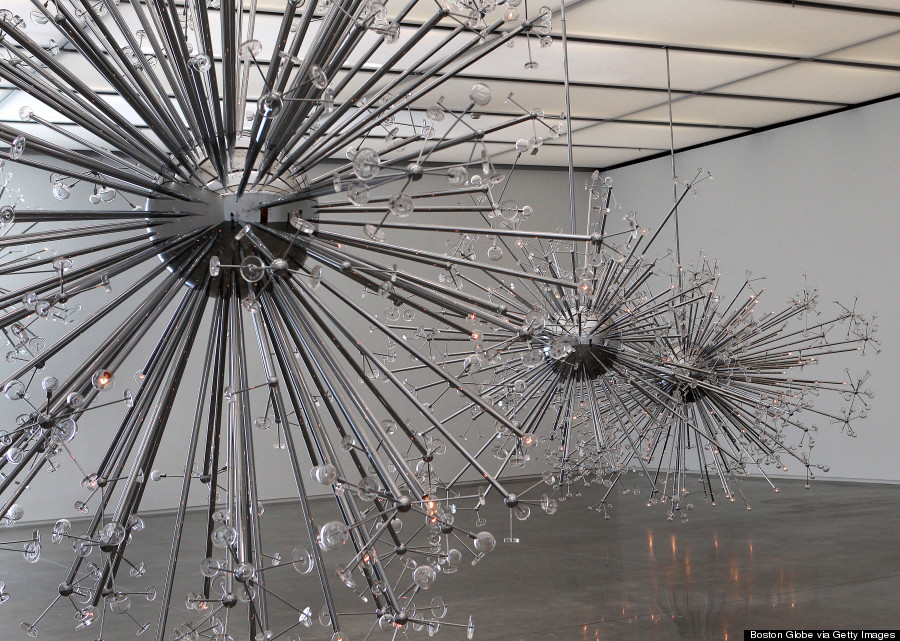 Josiah McElheny's magisterial sculptures of blown glass, "Island Universes," is a poem to the creation of universes. Each universe is a gigantic starburst of about 1,000 blown-glass orbs and 5,000 rods; some 14 feet across and 12 feet in length. The length of the rods is proportional to the time duration since each of the Big Bangs. The glass spheres represent galaxies at the corresponding moment, and the light bulbs represent quasars. McElheny collaborated with a cosmologist to ensure that these models are scientifically accurate. Finished in 2006, this piece is especially relevant today due to recent data that lends support to the multiverse hypothesis -- the mind-boggling suggestion that universes are constantly being created. 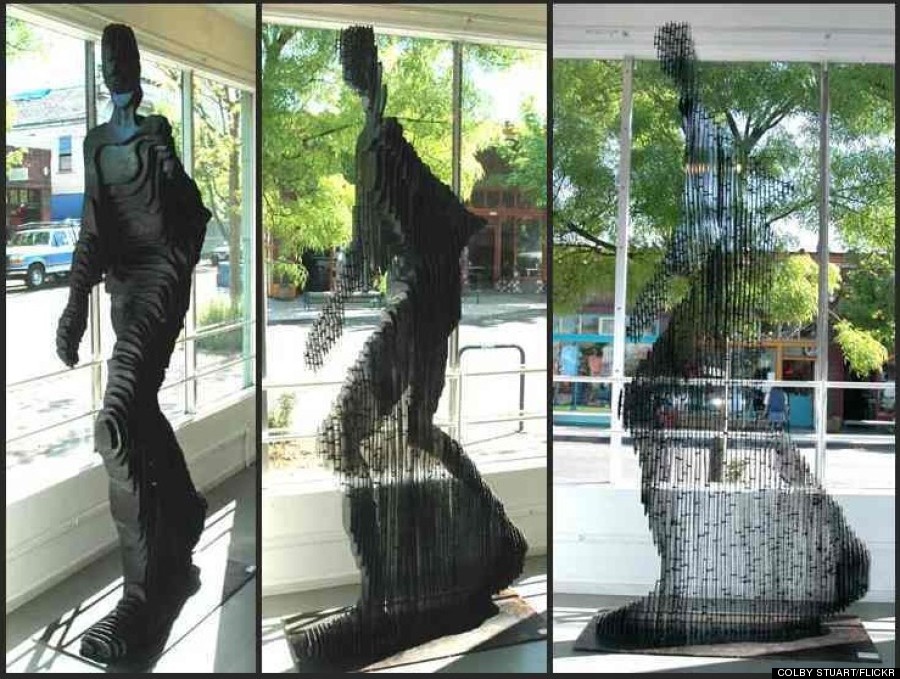 Physicist and artist Julian Voss-Andreae's "Quantum Man" is over eight feet tall and made up of over a hundred parallel vertical steel sheets. From the front, it's a man but as you move around it, the man becomes invisible. It depicts the ambiguous wave/particle duality of quantum physics which asserts that atomic objects, such as electrons, are -- unimaginably -- both wave and particle at the same time. An electron may reveal itself in experiments either as a wave or a particle. With both quantam physics and Quantam Man, what you see depends on how you look at it.

Biology and physics-influenced art are created by artists who study science or collaborate with scientists. With the developments in computers and algorithms, another group of artsci denizen have emerged who are artists and scientists rolled into one. Many such artists work in fields such as media art, which includes animation, and sound art, sculpting space with sound. They also work in data visualization art, which is a hot field as the Age of Technology morphs into the Age of Information/Big Data.

The piece shown in the video above is by Jonas Loh. It represents the data of emotions as shown in the frequency with which 12.5 million SMS text messages were sent during the 2012 London Olympics. Peaks occurred at moments of victory or an unexpected defeat. Loh represents this data as a seascape of waves of differing heights. 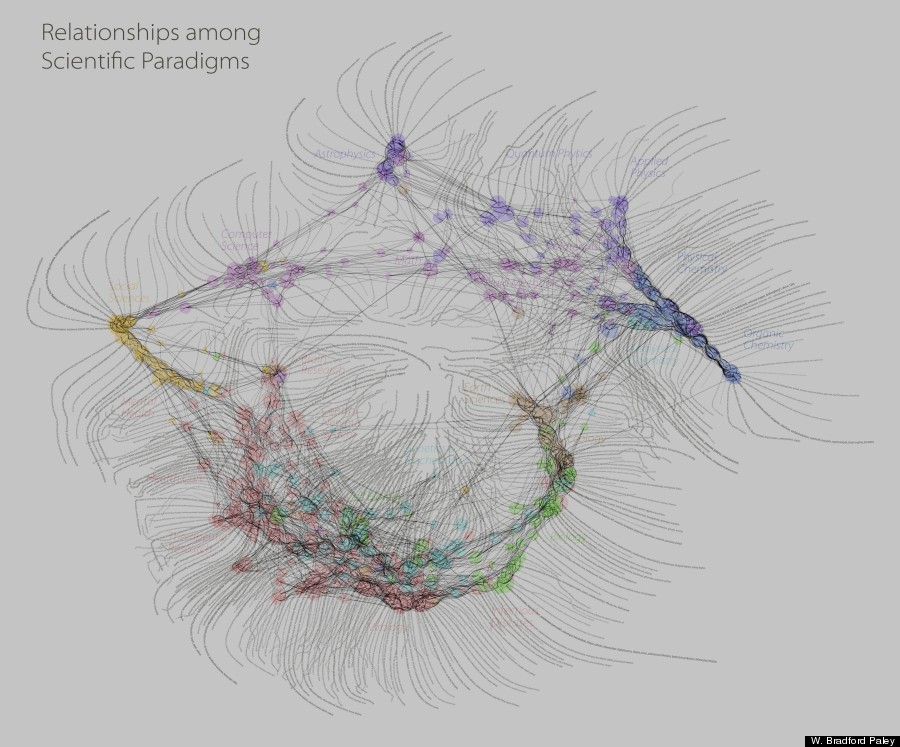 Brad Paley, whose work is displayed above, noticed that a survey of 800,000 scientific papers from widely differing disciplines revealed 776 paradigms -- a paradigm being a model or theory that scientists use to understand data. Newtonian physics and quantum physics are examples of paradigms. Paley tried several algorithms, seeking the best way of exhibiting the relations between paradigms which had concepts and citations in common. He finally created "Relationships among Scientific Paradigms". It is informative and aesthetic and looks a bit like an organism flying through the air. 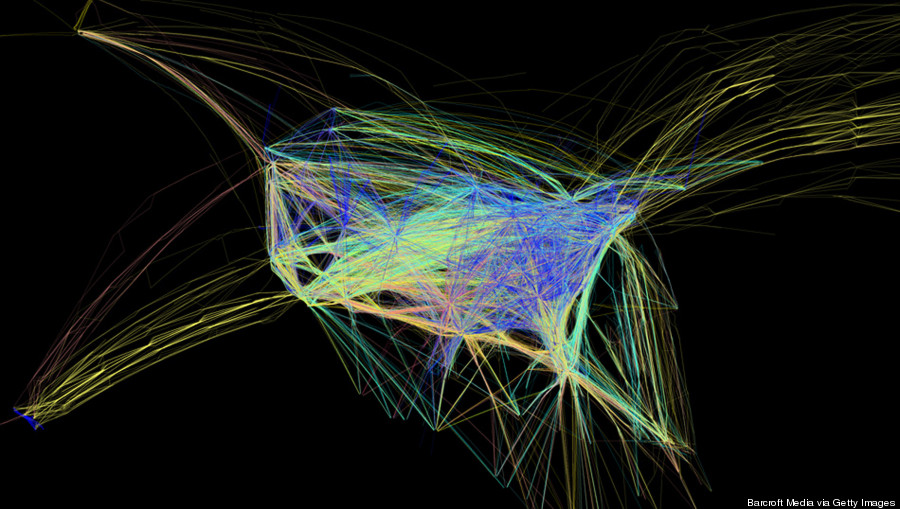 Aaron Koblin's "Flight Patterns," pictured above, is another art piece made up of data. Koblin collected the data of the 250,000 flights that crossed the U.S. on August 12, 2008. Flights produce ever-changing patterns as the day goes on, showing the outline of the U.S. at the time of day when many planes are in the air.

Another of Koblin's creations, produced with Chris Milk and pictured above, is "This Exquisite Forest", created using crowdsourcing. It is a spinoff of the Surrealists' game Exquisite Corpse, in which players add to a drawing or a sentence without knowing what comes before it. For This Exquisite Forest, viewers add animations using software provided by Google. As Koblin and Milk explain, "Users create short animations that build off one another [resulting in] a collection of branching narratives resembling trees." The different animations are revealed when viewers zero in on each leaf with a cursor.

I'm convinced that art, science and technology as we know them today will disappear and that "artsci" will be known simply as art -- leaving the door open for the next, as yet unimaginable, avant-garde.