Seeing a blue whale is an overwhelming experience, whether it's your first, tenth or twentieth time. At first, your eyes wander near and far in an attempt to take in the enormity of the creature. Then, a voice in your head screams, having realized that you're in the presence of the largest animal that's ever lived. Suddenly, you feel somehow connected to this mysterious being, hoping it would stay with you for just one more breath.

Decades of aggressive whaling in the late 19th and early 20th centuries drove blue whales to the brink of extinction, so anyone who sees one should feel extremely privileged. And while they have been protected since 1966, today's endangered population is a far cry from what it once was.

Fortunately, there are still a few places where blue whales gather year after year. Every winter, between 250 and 300 of them enter the Sea of Cortez to feed and nurse their young, making this Mexican paradise one of the best spots on earth for blue whale encounters.

That is where I came to marvel at my first giant of the sea this past February. I signed up for a week-long whale watching tour in the seaside city of Loreto, a well-kept secret in Baja California Sur that still feels like Mexico (unlike nearby tourist hotspot Cabo San Lucas).

Loreto's backyard is the Sea of Cortez, which shelters a third of the world's marine cetacean species. These highly productive waters, and their strikingly beautiful islands, are UNESCO World Heritage Sites.

My tour guide in Loreto was Michael Fishbach, famous for saving Valentina, a humpback whale that got entangled in a fishing net on Valentine's Day 2011.

Loreto is known for its sports fishing, not for its whales, which is both a shame and a blessing in disguise. We had about 30 whale encounters over four days, many of which happened with no other boats in sight.

Fishbach has for the past 18 years made his way down from North Carolina to Loreto during the months of February and March to observe (and study) these awesome creatures. He is co-director of the Great Whale Conservancy and is currently involved in several conservation efforts, such as stopping ship strikes on blue whales in the North Pacific or releasing data on the harmful effects of invasive research (satellite tagging in particular) on whales.

A day on the water with Fishbach, conditions permitting, starts promptly at 6:00 a.m., when the "panga," or skiff, leaves the marina. As the engine gets going, the darkness is interrupted by sudden bursts of underwater bioluminescence, light generated by different organisms. Minutes later the sun reveals some of the most dramatic settings you'll ever see. And the day hasn't even started.

Our days on the water were blessed with multiple whale encounters (mostly blue, but some humpback and fin). Time and time again we sat quietly on the boat waiting to see or hear a spout, and once we located the source, we skillfully made our way.

The whales' behavior was somewhat predictable. There would be that first breath, followed by a few footprints (slick circles on the water's surface that are left after the whale slips under), and a few more breaths. Then, depending on the whale, it would either show us its flukes or quietly dive after the last breath. After 10 minutes, give or take, the gracious dance would start all over again.

A certain distance has to be kept between the whales and the boat, but the whales don't always listen. One such rebellious giant surfaced surprisingly close to us as if to salute an old friend. It was Nubbin, a whale our guide has known for almost as long as he's been visiting Loreto. Upon realizing this, Fishbach jumped up and down in excitement, leaving no doubt as to what drives him back to the Sea of Cortez year after year.

We experienced another such moment with "White Eyes," a delightful blue whale Fishbach has known for roughly the same number of years. White Eyes stayed around us for more breaths than I could count. It was us, in fact, who eventually sailed away from him, breaking my heart a little. So when we saw him again on our last day, it was my turn to jump up and down in excitement. We shared several drizzling breaths with him again before going our separate ways.

"It is their ability to inspire feelings and passion in us that will lead us to heal the planet," Fishbach says about whales. "They have a tremendous ability to affect humans."

Strong winds kept us from navigating the Sea of Cortez on our last day, so we headed out west across the peninsula to see more whales in the vast Magdalena Bay. Every winter, grey whales gather in a few lagoons along the Pacific coast of Baja to mate and calve, and unlike any other whale species you may encounter in the area, these babies like to be touched. (So much so that they may even let you stick your entire hand in their mouths.) This is a much more touristy spot, but still worth a visit.

Out of the hundreds of thousands of blue whales that may have once swam the world's oceans, only between 10,000 and 25,000 remain today. If you come across one, don't just check it off your bucket list. Take it as a chance to learn more about them (and to help protect them) before it's too late.

PHOTO GALLERY
Blue Whale Encounters in the Sea of Cortez 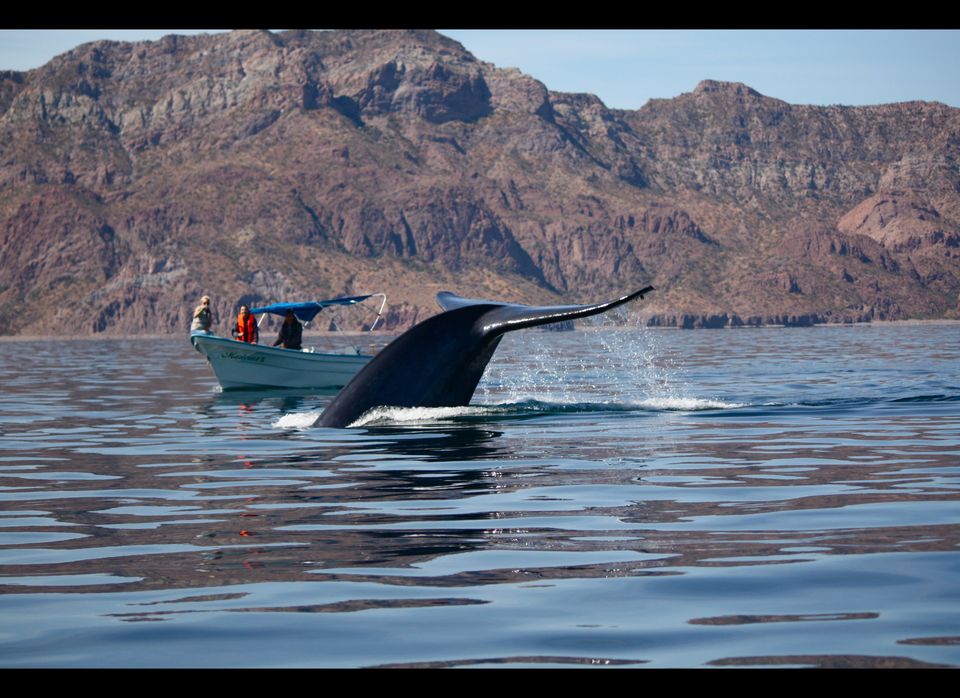