WASHINGTON -- On Monday, District of Columbia Mayor Vincent Gray broke ground on renovations at Cardozo Senior High School, a nearly century-old structure in Columbia Heights with a storied Washington history. "Today is the first step toward the District's goal of turning Cardozo Senior High School into a 21st-century, high-tech facility," the mayor said, according to a statement.

When the project reaches completion in August 2013, the school facility will be updated to include a regulation-size gym to accommodate basketball, volleyball and weightlifting. A cafeteria will be constructed in a former courtyard. There will also be a new central staircase, expanded band and choir rooms, and enhanced spaces for a kitchen and construction and electronic academies. In total, the modernization will cost roughly $100 million.

Race and segregation played a pivotal role in Cardozo's history. The building, constructed in 1916, was originally known as Central Senior High School, an all-white school. When the African-American population of Columbia Heights and adjacent neighborhoods began to swell, an existing "colored" school, Cardozo, moved into Central's building. The school was integrated with both white and black students in 1954. The building is listed on the National Register of Historic Places. 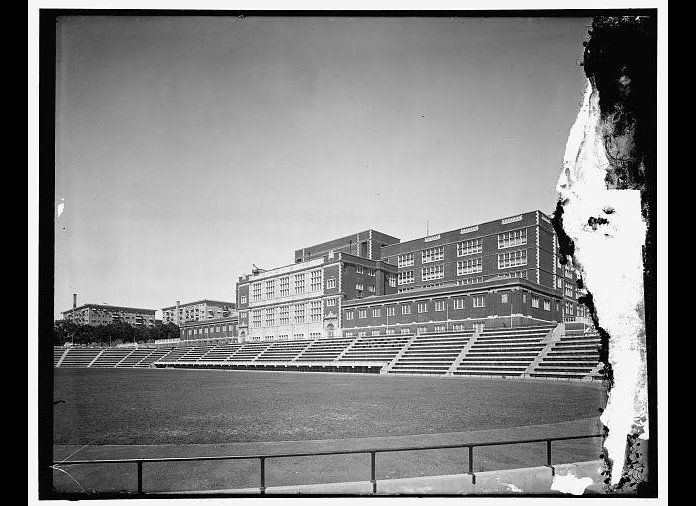 1 / 9
Here, Cardozo Senior High School is shown sometime between 1916 and 1920, back when it was still called Central High School.
Harris & Ewing/Library of Congress