On Aug. 26, President Barack Obama created the largest protected area on Earth when he expanded the Papahānaumokuākea Marine National Monument in the Northwestern Hawaiian Islands to a total 582,578 square miles (1.5 million square kilometers)--an area more than twice the size of Texas. Expansion of the monument will help conserve one of the most biologically and culturally significant places on the planet.

Papahānaumokuākea harbors over 7,000 species, a quarter of which are found nowhere else. It provides habitat for rare species such as the threatened green turtle, the endangered Hawaiian monk seal, and the false killer whale, as well as 14 million seabirds representing 22 different species. In the first half of 2016, scientists exploring the area discovered a new type of ghost octopus, nicknamed "Casper," and three new species of fish.

The world's oldest known living organism--a deep-water black coral estimated to be as old as the Pyramids--is found in the monument's expanded boundaries.

President Obama's announcement builds on actions by six previous U.S. presidents--three Republicans and three Democrats--to conserve the ecosystems and wildlife of the Northwestern Hawaiian Islands. In fact the original monument designation was made by President George W. Bush with the strong support of his wife Laura.

Explore the images below for a view of Papahānaumokuākea. 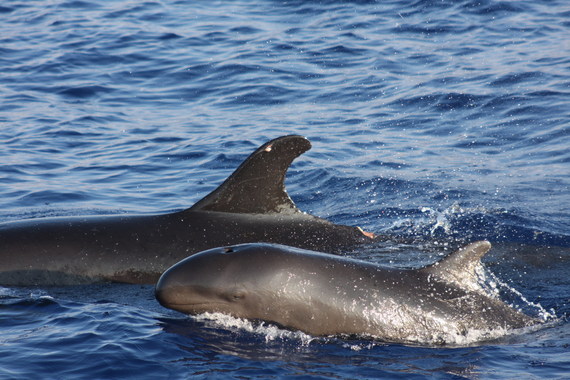 False killer whales, like the two shown here, are among 24 species of marine mammals found in Papahānaumokuākea. As top predators, these whales reproduce only every six or seven years and birth only one calf each pregnancy. The expansion of the monument will benefit the species, along with endangered marine mammals such as the blue whale, fin whale, and sei whale. 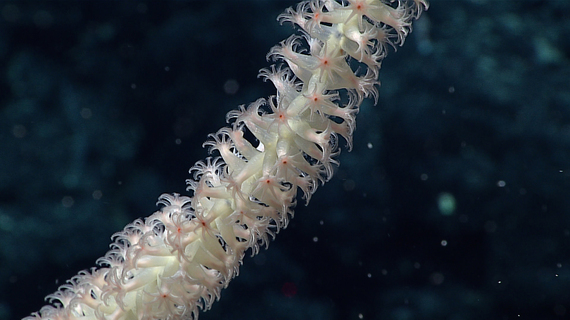 Bamboo coral thrives in deep water, including on some of the 110 seamounts (underwater mountains) in the area covered by the Papahānaumokuākea expansion. Seamounts host the majority of the known biodiversity in the deep sea--which reaches depths greater than 1,000 meters (3,281 feet)--where creatures grow slowly and reproduce late in life, making them highly vulnerable to fishing and other intrusions by man. 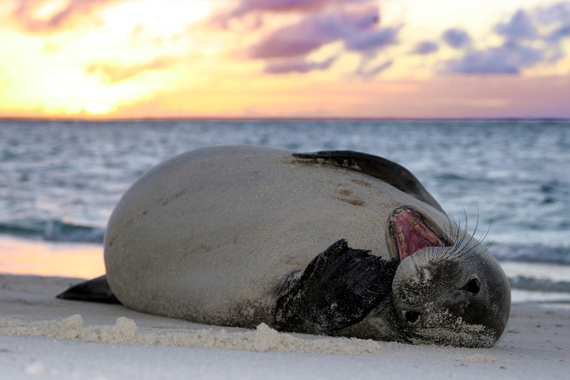 The monk seal is the most endangered of the seal species in U.S. waters, with only 1,100 remaining in the wild. The expanded Papahānaumokuākea Marine National Monument provides important foraging ground for 97 percent of the population of the monk seal, the only marine mammal wholly dependent on coral reefs. 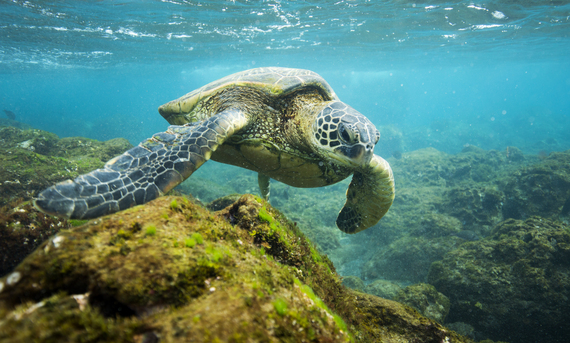 The endangered green turtle, above, is among the many species of marine and terrestrial life found in Papahānaumokuākea. Two other species of sea turtle--the leatherback and loggerhead--are declining in number, in part because they are often accidentally caught by commercial fishermen. Pacific leatherbacks experienced a 95 percent decline in the last two decades of the 20th century. 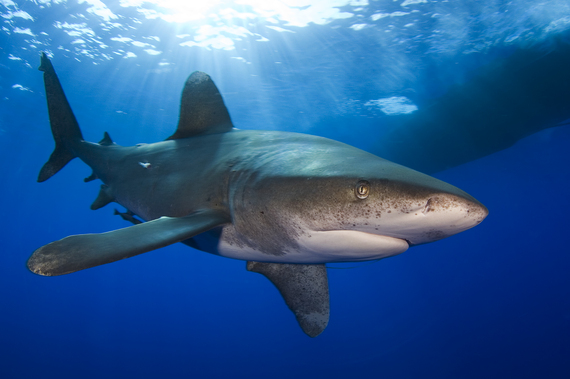 Marine scientists are hopeful that oceanic whitetip sharks, above, and silky sharks will use the expanded Papahānaumokuākea monument as a sanctuary to rebuild their populations. Numbers of both species have dropped considerably since industrial longline fishing became prevalent in the Pacific Ocean in the 1950s; fishermen are barred from targeting either species, but both frequently end up hooked as unintentional catch and are often returned to the water dead or dying. 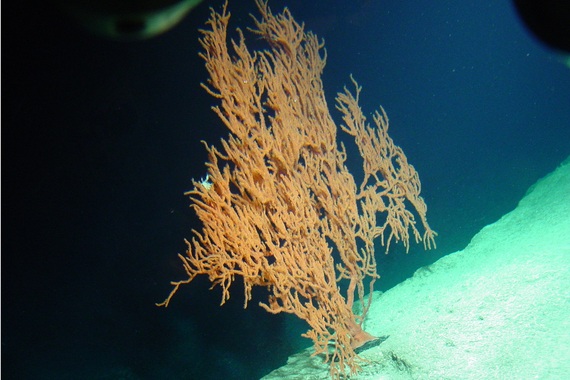 Scientists say a specimen of black coral, like the one above, found in the monument is the oldest living organism on the planet, at 4,265 years; a gold coral specimen also found within the expanded reserve is 2,742 years old. The enlarged Papahānaumokuākea protects legions of deep-sea coral communities, which are thought to be more diverse than tropical shallow reef systems, according to a study by the National Oceanic and Atmospheric Administration. In some areas of deep-sea coral, more than 90 percent of the resident fish are found only there. Marine reserves can safeguard deep-sea organisms from practices such as bottom trawling, which has been shown to destroy reefs that took thousands of years to grow. 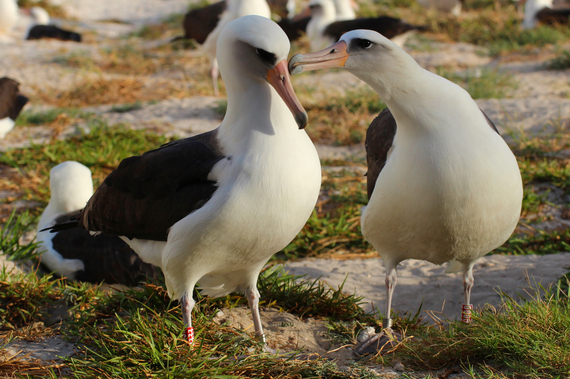 These Laysan albatrosses, like more than 98 percent of their species, nest on the Northwestern Hawaiian Islands. The bird on the left, named Wisdom, was banded by scientists in 1956 and returned to Midway Atoll in 2016 to hatch a chick. At least 65 years old, Wisdom is thought to be the world's oldest living bird and the oldest to successfully hatch a chick. 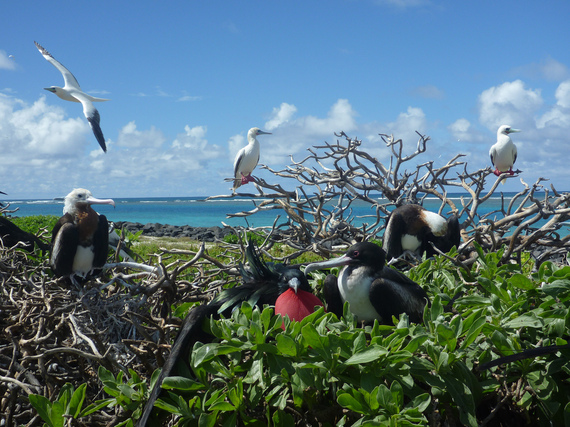 The Northwestern Hawaiian Islands provide refuge for 14 million tropical birds from 22 different species, and in Midway Atoll, Laysan Island, and Nihoa Island an estimated 5.5 million breed there annually. The expanded Papahānaumokuākea protects more foraging area than the original boundaries of the monument for boobies (including red-footed boobies, above), shearwaters, albatrosses, and petrels. 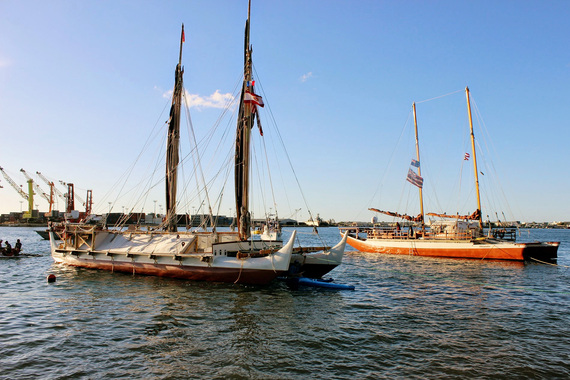 These two traditional sailing canoes , the Hōkūle'a, left, and the Hikianalia, departed Hawaii in 2013 for a four-year voyage around the globe as part of the Polynesian Voyaging Society's effort to promote ocean conservation. Some young-adult Hawaiians are reviving the practice of voyaging, which includes navigating solely from environmental cues, and are using the Northwestern Hawaiian Islands as their training grounds. The earliest inhabitants of Hawaii voyaged there from Polynesia as early as the sixth century A.D.

In 2006, the establishment of the initial Papahānaumokuākea monument inspired a movement to protect large ocean spaces and challenged world leaders to safeguard ever-larger areas of ocean. In the past 18 months, more of the ocean has been set aside for protection than at any other comparable time period in history, with new marine reserves announced by Chile, New Zealand, Palau, the U.K., and the U.S. The expansion of Papahānaumokuākea adds protection for vulnerable, endangered, and critically endangered species, and raises the bar for the size of future marine reserves around the world.