It's impossible to decide which was the biggest love-in of the day on the New Orleans Jazz and Heritage Festival's second Friday: 99-year-old Lionel Ferbos singing "When You're Smiling" or John Boutte who wrote HBO's Treme theme song, and Irma Thomas who wrote "Wish Someone Would Care" singing tributes to Mahalia Jackson's 100th birthday. The Centennial Celebration for Ferbos included his Palm Court Jazz Club Band named for the club where he still plays regular gigs. A contemporary of Louis Armstrong, Ferbos will celebrate his 100th birthday in July and he is still anchoring his own jazz band.

James Andrews, who goes by nicknames Satchmo of the Ghetto and 12, talked New Orleans music history in an interview by Ashley Kahn while playing cuts from his new CD, "The Big Time Stuff." Asked about Troy "Trombone Shorty" Andrews, James answered that he's thrilled with his little brother's career trajectory. Both are the grandsons of Jessie Hill who wrote the New Orleans standard, "Ooh Poo Pa Doo" including the classic line, "I won't stop trying til I create a disturbance in your mind."

Creating a disturbance in many minds was hip hop sketch comedian Jack Spratt as Hamp the High Stepper dancing like Verdine White if he were a superhero. He joined the all female Original Pinettes Brass Band who somehow managed to keep playing with a straight face. Spratt's moves were matched on a serious note by the Golden Sioux Mardi Gras Indians, and by the drum and dance collective Iviore Spectacale with director Seguenon Kone from the Ivory Coast. A few years ago Kone did what so many do after a visit to New Orleans. He moved here.

Leah Chase, Jr. exercised her wry sense of humor singing a melancholy dirge and adding, "I feel like the angel of death. And I like it." Chase's FEMA trailer was stolen from in front of her family's historic soul food restaurant which once fed the Freedom Riders - Dooky Chase's. Leah eventually got a second FEMA trailer and rolled with it, thanks in no small part to her sense of humor. She also sang a version of, "Walk In Jerusalem" that would have done credit to Mahalia Jackson.

The Gospel Tent Mahalia Tribute had competition across the track with the Blind Boys of Alabama sitting in with headliner WIllie Nelson for "This Little Light of Mine" and Cyndi Lauper joining Arcade Fire for "Girls Just Want to Have Fun." Lauper played Thursday and stuck around for the cameo. Bonerama played the "Star Spangled Banner," trombone style, in a particularly patriotic week and the crowd went wild.

But the Mahalia tribute was still the highlight of the day. John Boutte's gospel set included "His Eye Is On the Sparrow" and his delivery of: "I sing because I'm free" drew resounding applause from the audience. Irma Thomas was in fine form, even for Irma Thomas, as she sang Mahalia standards from "He's Got the Whole World In His Hands" to "How Great Thou Art."

She recalls meeting New Orleans native Mahalia Jackson and said that "Everything about her was gracious. You knew she was God sent." Boutte and Thomas had the gospel tent levitating, or as close as we could get. 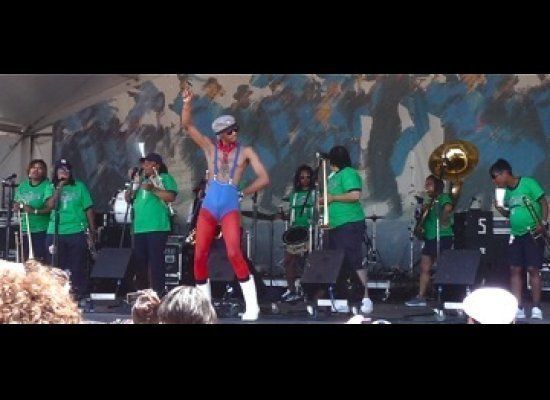 1 / 10
Pinettes and Hamp
The Original Pinettes Brass Band with Jack Spratt as Hamp the High Stepper.