Recently, I was standing on a street corner on one of the beaten avenues of Detroit. I was staring at a small building that was in the throes of being reclaimed by nature. The rusty steel sign frame still hung from the building, but any identifiers were long gone.

At first, I thought it may have been an old gas station or something akin to that. As I was trying to get a closer look, a gentleman pulled up to the corner in, what appeared to be, an early '90s pick-up truck:

"Are you buying that place from the bank?"

"No, I'm just trying to figure out what the place was," I said.

"It was a record store, back in the day. And they sold penny candy, too. We used to walk down here and buy our records."

"How long ago did it close?"

Before pulling away, the man went silent and stared at the old building, like it was an old friend way down on his luck. 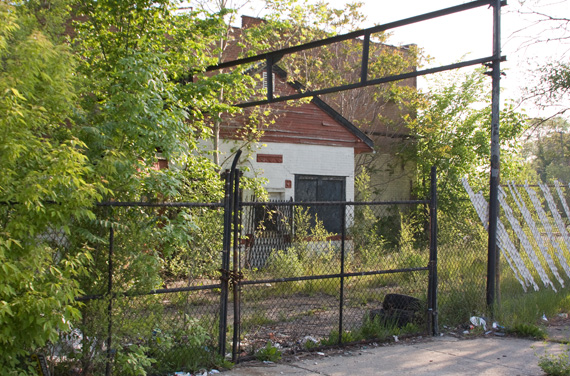 I then walked a bit around the corner and saw a boarded up, decaying building. On a crudely-written piece of wood above the door, was a sign that read "Candy Store." It was sad and sinister at the same time. My guess is that its roots lie in a time after the corner record/candy store had closed and the neighborhood had started to change. 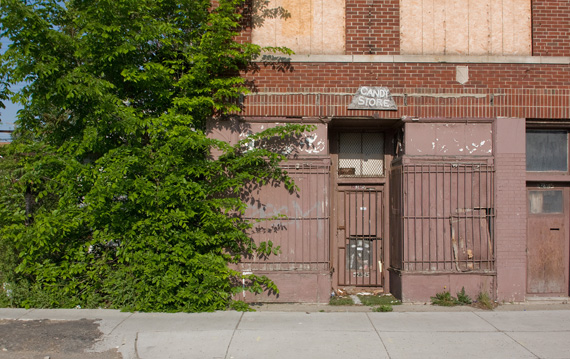 It's easy to understand why the citizens of Detroit may feel offended by the large amount of attention that is paid to their abandoned factories, stores and homes. It must seem like there are people coming from all over the globe to trade on a city's agony. But, for those of us with a fixation on documenting mid-20th century America and the Rust Belt, in particular, Detroit has so many stories, as well as the relics to still visualize and connect them, that it's a tough town to stay away from. It sits like a decaying monument to America's manufacturing prosperity and all that came from it, such as culture, community and commerce.

Having worked with and played music most of my life, Detroit is forever sacred ground. Of course, Motown gets the brunt of the attention, as well as places like The Grande Ballroom, where the Stooges and the MC5 plied their trade, but there were many historically relevant, but now largely forgotten, music venues, such as the Campus Ballroom, Phelps Lounge and the Apex Bar. George Clinton worked Parliament out at the Campus Ballroom and at the Phelps Lounge, where, according to the fantastic Bettye LaVette, he transformed Parliament into Funkadelic. The late blues great, John Lee Hooker, got his start at the Apex in 1943 while living in Detroit and returned there often. 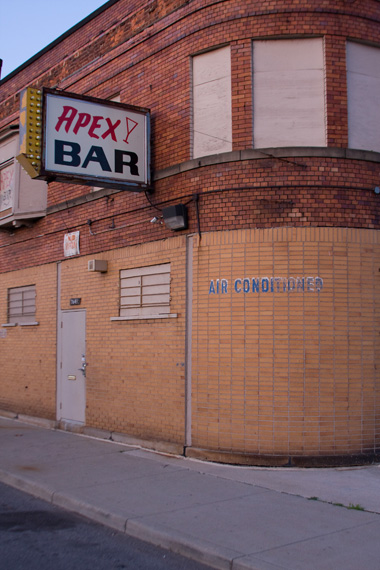 The Phelps Lounge was an R&B mainstay regularly hosting up and coming greats like Wilson Pickett, Bettye LaVette (who lived around the corner), the Ruffin Brothers, who later continued there with the Temptations, James Brown and the Ike & Tina Turner Review. The last date on the books of the Phelps Lounge was apparently an appearance by B.B. King in 1981. 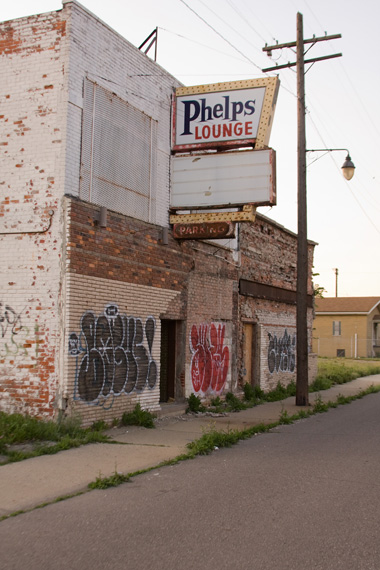 The Apex Lounge is actually still open, though they no longer host live music. The Campus Ballroom has been shuttered since the '70s and sits rotting on Fenkell Street. The Phelps Lounge has been closed and falling apart for many years. The front door has been broken into and the remains of its slick bar and booths are in tatters. Over the years, the inside of this landmark has been repeatedly scavenged for sheet metal and anything else that could possibly be turned into a few pennies. 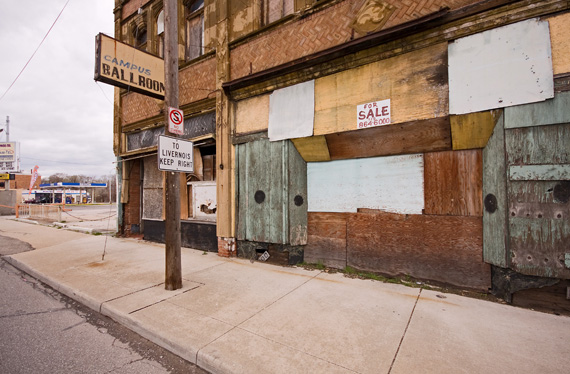 Driving through the now dilapidated neighborhoods that contain these once vital places, I found myself thinking about the man in the pick-up truck and his long-entrenched memories of buying records and candy at the previously mentioned site. I wondered how many people were still left in these neighborhoods that spent their nights at the Phelps Lounge or the Apex, falling in love, falling out of love or falling in love with someone else, making out, fighting, drinking and scoring... Or maybe just grinding the night away to the Wicked Pickett and the Crawling King Snake.

Please visit Randy Fox's website for more Rust Belt photography. Fox also edits and manages the American Elegy website, which features the interviews and work of some of our greatest photographers, well-known and emerging.