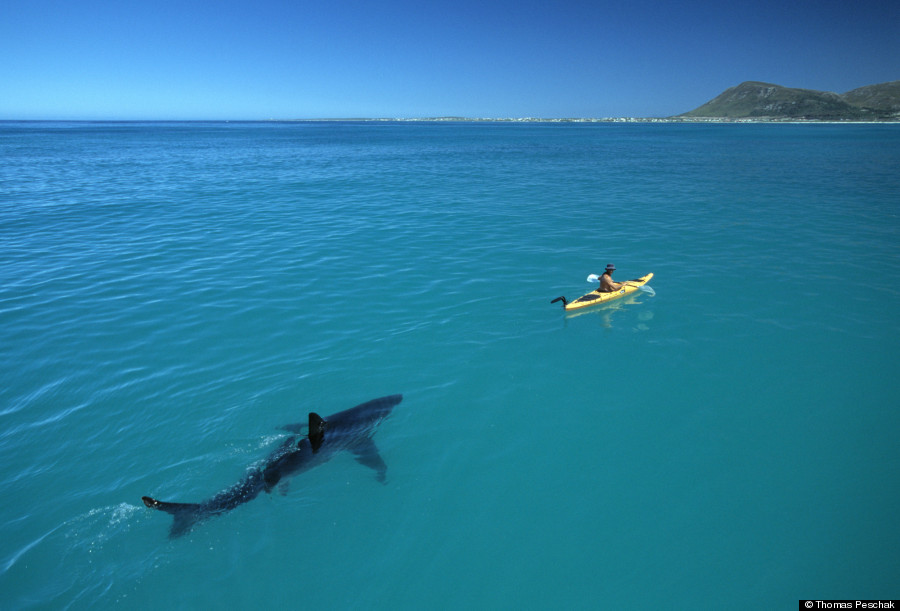 The following is an excerpt from Sharks and People by Thomas P. Peschak

This place has all the ingredients of shark paradise: Rich ocean currents, a bountiful food supply, and remoteness. Historical accounts of ships sailing these waters tell of an ocean so full of sharks that one could walk on their backs across the sea; of hammerheads the size of whales and schools of reef sharks so vast that, seen from underwater, they blocked out the sun. But my first sight as I descend is not of a shiver of sharks but of a massive gill net draped over a reef like a deflated balloon. A purple triggerfish beats its winglike fins but is going nowhere, the net ensnaring it in a deadly embrace. I take a few photographs to document the scene then cut the fish free with my dive knife. In just one hour I observe a dozen nets drifting in and out of view, as the current relentlessly propels me past steep walls, over coral gardens, and around undersea pinnacles. The underwater landscape is majestic but seemingly absent of sharks and other big fish.

The ghost fishing nets become my constant companions for days on end. An entire week of diving passes before I see the first shark—a juvenile reef shark barely the length of my forearm entangled in a discarded gill net. The net is sea-beaten and worn but still able to inflict damage. The shark is alive, vigorously fighting the net’s clutches as I approach. The scientist I’m diving with skillfully disentangles and releases the shark. But the odds of this little shark reaching adulthood are slim; it will likely be caught in another fishing net, as they are so profuse and pervasive. The old historical accounts of masses of sharks and ones of enormous size are relicts of the past, disappeared not just from this site but also across much of the world. Abundance is now the exception and a dearth of these apex predators the rule.

While archaeological and historical accounts provide anecdotal snapshots of past populations of sharks, science has no way of ascertaining how many sharks roamed the ocean before the advent of commercial fisheries. It’s even very challenging to approximate current shark populations, as all of the scientific means of assessing them are limited to some degree. Scientists, fishermen, and conservationists argue at length about how many sharks are left and how quickly their numbers are declining. However, they rarely dispute the fact that many shark populations around the world are indeed declining at an alarming rate. No species of shark is known to have gone extinct due to human-induced pressure so far, but many species have disappeared from parts of their known range. While pollution, climate change, and habitat destruction challenge the overall health and survival of sharks, the most immediate cause of their decline is clearly overfishing.

Some of the earliest documented evidence of shark overexploitation is from the first half of the 20th century, when fisheries targeted shark liver for industrial purposes and as a source of vitamin A. Accounts of abrupt fishery collapse are associated with porbeagle sharks off Norway, soupfin sharks off the Pacific Northwest of North America, sixgill sharks in the Maldives, and basking sharks off Ireland and Scotland, as well as other species worldwide during that time. Since target fisheries for sharks were so ephemeral, and because sharks were not as economically important as other more abundant fish, very little monitoring or assessing of shark populations was undertaken. By the latter part of the 20th century, fisheries science had evolved but was still focused on the most commercially valuable species, like cod and tuna.

In general, the most robust analyses, or stock assessments, to determine the status of shark populations are those that use information on the catch history, the biology of the species, and data on abundance trends. However, often this kind of data is unavailable. So instead, scientists have turned to data on shark “bycatch” to create a general picture of the status of any given species. If certain shark species were caught less frequently than in the past in a specific area, even though the same fishing methods and efforts at fishing were undertaken, then this might indicate a decline in population.

For example, data from fisheries observers on longline and purse-seine fishing vessels targeting tuna in the western and central Pacific Ocean indicate oceanic whitetip shark numbers decreased 90 percent from 1996 to 2009. And stock assessments on porbeagle sharks in the North Atlantic Ocean show marked historical extents of declines to less than 30 percent of their original abundance. Similar trends of reduced shark catches in the wake of strong fishing pressure have been demonstrated for many other fisheries around the world. Declines in the size and weight of sharks caught have also been monitored. In parts of the tropical Pacific Ocean, the mean weight of blue sharks caught declined from 115 pounds (52 kg) in the 1950s to 49 pounds (22 kg) in the 1990s.

The International Union for Conservation of Nature (IUCN) Shark Specialist Group has assessed the extinction risk of 465 species of sharks, using the IUCN Red List criteria and categories. For half of those, there is not enough information about even the most basic biology and fisheries catches to assess their conservation status. Of the remaining species, 11 (2.4 percent of total species) are classified as critically endangered, 15 (3.2 percent) are categorized as endangered, 48 (10.3 percent) are considered vulnerable and 67 (14.4 percent) are near threatened. The remaining 115 species are classified of least concern and include mainly smaller, faster growing species like catsharks and others not yet targeted by fisheries.

The IUCN Shark Specialist Group has found that highly migratory, open-ocean, or pelagic, sharks make up a particularly threatened group, with many heavily fished species like makos, threshers, oceanic whitetips classified as vulnerable. Great hammerheads and scalloped hammerheads are categorized as globally endangered, making them the most threatened of the wide-ranging shark species.

Why is it that fishing has had such a dramatic impact on shark populations? Much of this has to do with the life strategies of sharks, which served them well for 400 million years but is now proving to be their downfall.

Many species of shark have life-history patterns more similar to that of a marine mammal or a human than to a sardine or flatfish. Sharks are K-selected species, characterized as having low reproductive rates as opposed to r-selected species like sardines, which have a quick turnover in population. This means sharks have certain traits that make them vulnerable to overfishing. For one thing, most sharks grow very slowly, only a few centimeters per year. And they are slow to mature and often don’t begin to reproduce until their teen years or later. Some, like the dusky, reach sexual maturity at 20 years. Sharks also typically have long gestation periods that often last longer than those of humans. Many species also have low fecundity for a fish, giving birth to a dozen or fewer pups at a time. The sand tiger shark has just one or two per pregnancy. Adding to their fragility, a few species give birth only every second or third year. This combination of traits leaves sharks vulnerable to overexploitation and slow to recover once depleted.