There's been a major increase in Photoshop awareness lately. Excessive Photoshop is easy to spot, and often called out as soon as the photos emerge. The Internet's discernment hasn't done much to reduce the number of models casually missing limbs, but the issue extends far beyond Photoshop: It includes all of the messages directed at women that tell them they are not good enough, or thin enough or questionably pore-less enough.

Some might say Photoshop is too easy to identify and not the core of the problem. Certainly, the issue extends further than digital alteration, but precisely because Photoshop is so easy to call out, it's a great place to start the conversation. In hopes of culling through unrealistic demands for perfection, we bring you answers for questions from those who don't think Photoshop matters:

Before you lecture me, are you sure you're just not jealous of naturally thin models that are much hotter than you?
Okay, let's calm down. Pretty much all of the women photographed for ladies' ads and magazines are naturally thin (and much hotter than me), but even they have been airbrushed beyond recognition. This is not a matter for debate. When women are so lacking in pores to the extent that they appear shiny, they have been Photoshopped. Sometimes it's subtler than that. The most stunning proof of how extensive retouching can be comes in the form of absurd Photoshop fails.

But those are just mistakes, what's the big deal?
Well, look at this recent Photoshop debacle from Ann Taylor Loft: 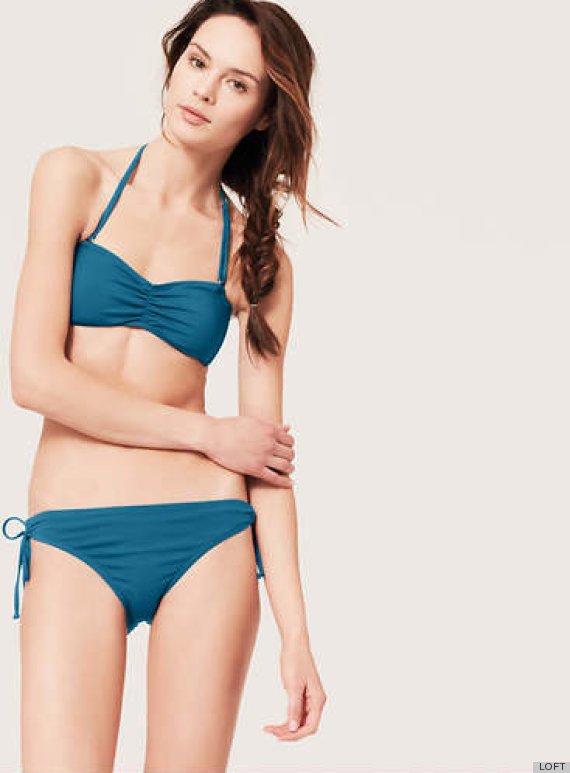 Wow, that's actually really bad.
Yeah, in a statement from a rep, the company said they were removing a tattoo, but obviously this is reflective of digital waist-trimming.

But don't you know that is fake? I mean, it's really obvious that a real life woman can just chop off half her stomach.
The importance of that kind of photo is what it reveals is being done to other images. When women's bodies are being so aggressively altered that a missing stomach slips under the radar, we have a problem. This is not just the case for advertisements, but covers of and features within the magazines that run them as well.

Um, wait. If Photoshop in magazines is so terrible, why did all the feminists get so angry when Jezebel tried to get retouched photos of Lena Dunham?
Because that campaign was salaciousness masquerading as feminism. Why hasn't Jezebel offered a $10,000 reward for un-retouched photos of Kiera Knightley or Kate Moss? To surface the original photos seems to imply that, as Bitch magazine put it, "There’s no way a known slob like Dunham could look good without technological assistance, right?"

Okay, I get that, but can't you just look away? Throw out the magazines and read "Infinite Jest" or something!
Well, "looking away" implies there are a finite number of instances in which Photoshop can be avoided. The biggest problem with Photoshop is that it normalizes an unrealistic body ideal, making things like "thigh gaps" seem to be the norm.

There is an obsession with thinness that is prevalent throughout the very ideology of our culture. The issue starts for girls in their early teens, but continues to work on their self-esteem well into adulthood. The key takeaway here is that the obsession with thinness is embedded in the core of most messages directed at women, not just the pages of a certain magazine.

What other messages? Like text messages?
That's not even a good joke.

Fine, what kind of messages though?
There's a wide range of things we're talking about here. Over at Buzzfeed, Amy Odell emphasized the need for a conversation, pointing to things like the emphasis on cleanses, unhealthy amounts of exercise or diet booze -- Skinnygirl, for example. "That whole brand sends the message that other food and beverage and lifestyle brands are, by default, Fatgirl brands ... Some things aren’t meant to be 'healthy,' they’re meant to be delicious — and margaritas are one of those things!" O'Dell wrote. Most media geared towards women teaches them that they should either be thin or trying to get thinner.

Are you saying all of these messages are the direct cause of all bulimia?
No, causation is a loaded word in psychology, and there conflicting opinions as to whether there is a direct link between excessive Photoshop and eating disorders. That said, the issue is that these images (and, as I mentioned, most images directed at women) foster a wealth of insecurity, and undue pressure to be unrealistically thin.

But women are insecure in general! That's practically an official part of being a woman.
That's an over-generalization, but it reflects a deeper understanding of the effect of these messages. That seemingly automatic female insecurity is not an illusion. As Jessica Valenti recently wrote in an essay for the Guardian on women in the work place, "Women's lack of confidence could be just a keen understanding of just how little society values them." In the specific case of body image, that insecurity is often a direct reaction to the ways women are told they need to be thin. That insecurity is informed by something other than just being born with a vagina.

But is caring how you look always a bad thing? Maybe some women just want to feel pretty.
We're not just talking about a simplistic vanity here. A recent study from TODAY/AOL found that the average woman spends two weeks a year obsessing over her appearance. Sixty percent of women have negative thoughts about their appearance on a weekly basis. This is a widespread problem, that cannot be reduced to wanting to feel pretty. According to TODAY, "Obsessing over your appearance is terribly unhealthy, potentially leading to mental health problems like anxiety, depression and disordered eating, decades of research has shown."

Alright, I guess I see what you're saying. The thinness obsession extends far beyond Photoshop fails, but they are a great example of how ridiculous this crap can be.
Ridiculous crap, well said.

Thanks. So, is there a solution? Are those Dove commercials part of it?
No, this issue is so pervasive that it would require a major cultural overhaul to ever truly be fixed (and those Dove commercials are cloying and generally terrible). Although, we don't have to just be passively susceptible. Our greatest weapon here is mindfulness (and celebrities, like Jennifer Lawrence with her Dior ads, acknowledging that fact is helpful in establishing that mindfulness). When the thin obsession comes in the form of excessive Photoshop, we can be actively aware of how things are being altered. It's that critical eye that can then hopefully be applied to the mass of other harmful messages, so we can one day understand things: "all you need to have a 'bikini body' is a bikini and a body," and the surprising fact that "bikini season" is actually just summer.