This vegetarian festival might turn spectators away from meat -- even though it turns people into shish kebobs.

Participants in the Phuket Vegetarian Festival in Thailand pierce their faces with skewers, knives, drill bits, umbrellas and even model helicopters as a part of the annual body purification ceremony.

Believed to have been celebrated by the city's Chinese community since 1825, the tradition started in the Kathu district, the home of many Chinese residents and shrines, according to a festival website.

When members of a visiting Chinese opera troupe fell ill in Phuket amidst a deadly outbreak of disease, the performers realized they had failed to honor two Taoist gods on the first nine days of the ninth Chinese lunar month, according to lore.

After adopting a vegetarian diet, the performers recovered -- wowing the locals.

Every year since, Chinese residents of Phuket have held the Vegetarian Festival, abstaining from meat, alcohol and sex. Other festival guidelines include wearing white and keeping clean -- especially when it comes to kitchen utensils, according to PhuketVegetarian.com's list of 10 festival rules.

People who are mourning and women who are pregnant or menstruating are urged not to attend the celebration, the site notes.

Worshippers start the ceremony by rising "go teng" poles into the sky at dusk, according to the Phuket Gazette.

The poles, which are adorned with nine lanterns for the gods, remain upright until the end of the festivities when they are lowered, meaning the gods have gone back to the heavens, the paper notes.

Many participants don't eat meat for the last three days of the festival, which stretches from Sept. 27 to Oct. 5, this year, according to the International Business Times. Some choose to go vegetarian for the entire duration of the rite, a Phuket tourism website notes.

But the festival is best-known for a more extreme act of devotion.

Participants called "ma song" or "mah song" -- meaning "horses of the gods" or "spirit mediums" -- inflict pain on themselves, absorbing bad energy to keep it away from their communities.

Some of the ma song, who say their bodies are taken over by gods during the festival, dress in white and stride across hot coals or climb and descend ladders made of knives.

Others stick things through their faces.

In processions with fireworks and drummers -- believed to help drive away evil spirits -- the ma song march through the city.

According to a festival website, people become ma song for two reasons -- they are either specifically chosen by the gods to play the role, or they have received a bad omen and are hoping to alter their fate.

By sticking foreign objects -- which range from blades to firearms -- through their cheeks, many ma song believe they can keep bad karma away from other people.

"I know that the spirit pierces my cheeks with the object, with no anesthetic, but I feel no pain at all," ma song Khun Uten told Phuket.com. "It's lucky that, in my case, he never uses any of the large, frightening objects you see some ma song carrying."

"Every time my body is taken over by the god, I know what's going to happen, and I want to stop it," the 35-year-old Phuket native and father of two, who has pierced his face at the festivals since he was 15, told the website. "I want to run away. But, as I said, my body is not mine anymore and I cannot resist." 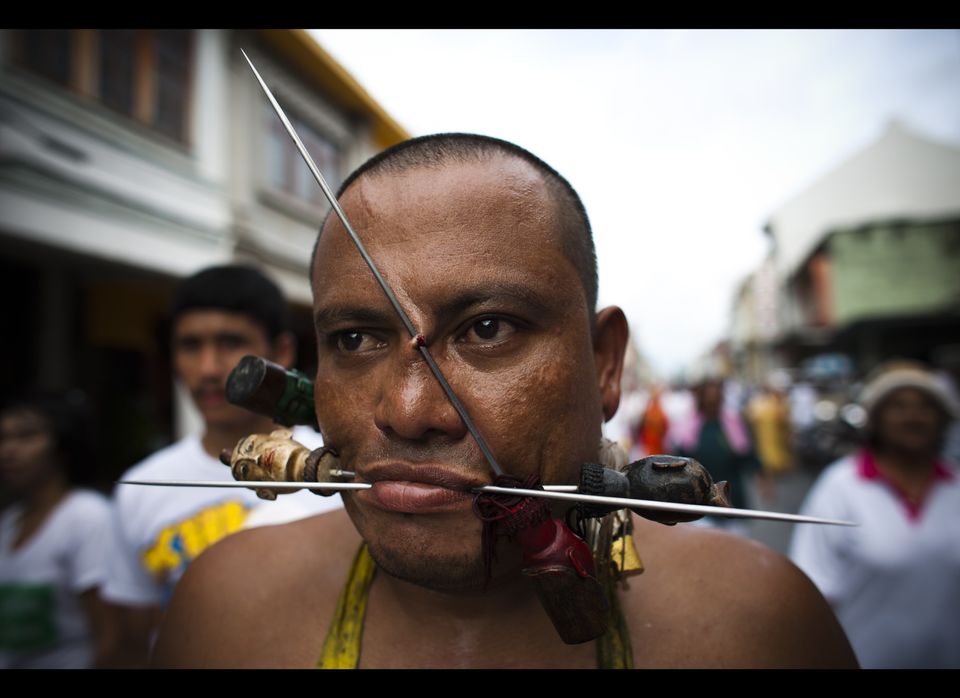 1 / 17
Phuket's Vegetarian Festival
A devotee of the Chinese shrine of Kathu Shrine, pierces his cheeks with skewers during a procession of Vegetarian Festival on October 4, 2011 in Phuket, Thailand. (Photo by Athit Perawongmetha/Getty Images)
Getty