Amid battles that have erupted over states banning local anti-discrimination ordinances and moving forward on “religious liberties” laws targeting lesbian, gay, bisexual and transgender (LGBT) people -- seemingly catching some LGBT activists off-guard -- Phyllis Schlafly has a message for the LGBT community: Don't believe for a minute that the Supreme Court’s decision in June on marriage equality, no matter how positive, will diminish the crusade against LGBT equality. In fact, she says, it will only serve to reinvigorate the anti-gay movement.

The Eagle Forum founder and leader, often referred to as the founding mother of the Christian conservative movement, speaks from experience. As an anti-feminist crusader, she is often credited with almost single-handedly stopping the Equal Rights Amendment (ERA), which initially had enormous momentum in the states in the '70s, all but guaranteeing full equality for women in the Constitution. Opponents, however, used the backlash among conservatives to the Supreme Court’s 1973 Roe v. Wade decision, especially in southern states, to successfully kill the ERA dead in its tracks by the early '80s. The backlash has now been used to not only restrict abortion rights but to prevent laws to end income disparity and to positively affect many other issues for women. 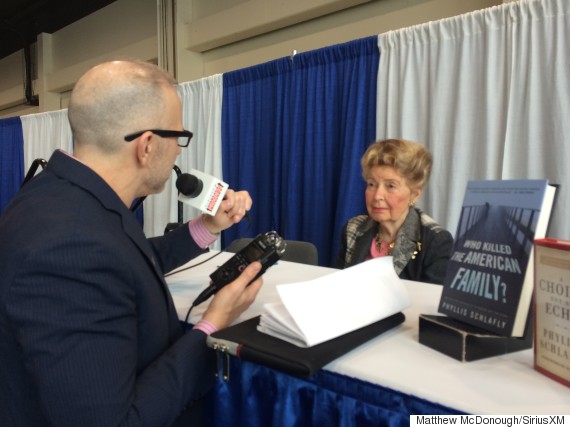 “The gays have their argument about inevitability,” the 90-year-old author of 25 books told me in an interview for SiriusXM Progress at this year's Conservative Political Action Conference in National Harbor, Maryland, over the weekend, during a book-signing including her new book, “Who Killed the American Family?”

"I don’t think that’s so,” Schlafly continued with a smile, rejecting the “inevitability” argument. “I’m extremely disappointed that the Republican Party, the conservative movement, even the Democratic Party and the churches, have been saying, ‘Well soon the court will decide, and that will be it.’ Well, a lot of people thought that about Roe v. Wade, and we’ve seen the whole abortion movement turned around in the last ten years.”

Schlafly has sloughed off the fact that even her own son is gay. (John Schlafly was revealed to be gay in the gay press back in the early '90s and confirmed the reports, but defended his mother and continued working for her.) She’d explained that her son "supports me in everything I do," including fighting what she views as the dangers of "the gay agenda." Schlafly believes the fight is critical now more than ever, saying that she’d been warning conservatives about the “kingmakers” (her word for establishment Republicans), the “supremacists” (judges whom she believes are liberal activists) and the “threat” to “religious liberty” for years. But she is heartened by the renewed energy around “religious liberties” laws and other laws targeting gays, and sees them as among many strategies for anti-gay conservatives to pursue moving forward.

“We should develop all kinds of strategies -- legal strategies, legislative strategies and public opinion strategies, in order to reject the rules of, in many cases, a single judge or just a simply majority of judges,” she said. “I do believe the grass roots can take back the Republican Party... These kingmakers... they're the people who really want us to be bipartisan and get along with everybody. But that's not the American way. Americans believe in the adversarial concept."

Listen to a clip of the interview: