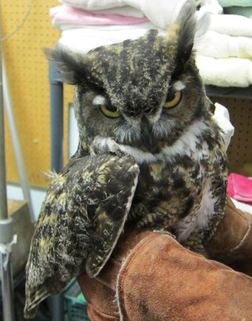 In medical terminology, a comminuted fracture is a bone broken so badly it is reduced to splinters. This is obviously an extremely severe injury, and it happened to this Great Horned Owl when a passing car shattered his wing.

Upon intake to the Wildlife Hospital, WildCare medical staff wrote on the bird's medical chart "if this bird is ever going to fly again, he'll need surgical repair and even then it is a long shot."

But other than the terribly fractured wing, the owl was very healthy. Even in his injured state, he was eating well on his own, and appeared "bright, alert and responsive" or BAR. This bird deserved a second chance.

The pinning surgery was extremely complex. Radiographs (x-rays) showed the fractures to be comminuted (broken into fragments) and the whole area to be extremely swollen. Dr. Duerr placed a pin to stabilize the bird's ulna, exiting near the bird's elbow. Because of the fragmented nature of the fracture, she also placed multiple external fixators to align the shards of the bone together. The bird was given antibiotics and anti-inflammatory and pain medications, and his wing was wrapped. He returned to WildCare for recovery.

An interesting component of the owl's wing wrap was the use of "distraction tabs" placed at intervals along the surface of the wrap. What are distraction tabs? They're just what they sound like-- a way to distract the patient and prevent him from extricating himself from the bandages and splint.

An owl can't be placed in an Elizabethan or "e" collar, the protective plastic lampshade dogs and cats wear home from a visit to the veterinarian's surgery. Animal patients of all species want to be free of constraining bandages and splints, and stopping our patients from removing necessary medical wrappings is always a challenge. 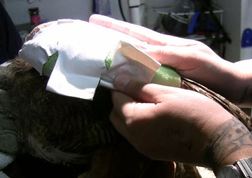 This Great Horned Owl's chart noted that, during the first night he spent at WildCare, he had managed to remove the protective wing wrap fairly easily. If he managed to do so again post-surgery, the result could be catastrophic. The distraction tabs give the bird something to pull, tug and worry at, but they're not actually part of the wing wrap, just stuck to its surface. The owl can spend all night pulling off the tabs, but the wrap will still be in place in the morning. In this owl's case the distraction tabs worked like a charm.

Dr. Duerr instructed that the post-surgery wing wrap should stay on for five days, at which point the pin insertion sites should be cleaned and the owl should start undergoing physical therapy (PT).

Initial PT involved massaging the bird's patageal tendon and doing gentle extensions at the elbow and the wrist, just to keep the synovial fluid in the joints moving and the joints lubricated. The bird continued to eat well and to gain a little weight. In fact, some of his medications were switched to oral doses, provided in defrosted mice, which functioned as owl "pill poppers." 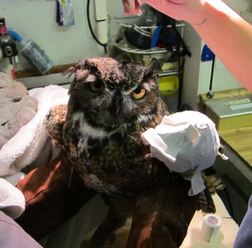 At each change of the wing wrap, medical staff reattached distraction tabs, noting that, as his condition improved, the owl was getting better at removing them. PT became slightly more intense, with longer intervals of extension and exploration of full range of motion. The bird remained on pain medication (the reason he looks slightly dopey in photos and video) and anti-inflammatories throughout this period to prevent pain and allow healing.

Finally, after 29 days in care, Dr. Duerr returned to remove the pin and for the first time since his injury, the owl was able to move his wing without a wrap on it. The first hours post-wrap removal are a delicate time, as the bird is at risk of refracture as he moves and flaps the wing. Medical staff held their breath, but the next day the bird was on his perch, had eaten three mice and, best of all, his wing didn't droop at all.

The next step was to move the owl to an outside cage to give him more space and the opportunity to actually start using the wing.

At WildCare's current location in downtown San Rafael, our choice of aviaries for a bird this size is very limited. Our largest aviary, the K Aviary, is the best option for a full grown owl, but at the time this bird was ready to go outside, the K Aviary contained several crows. 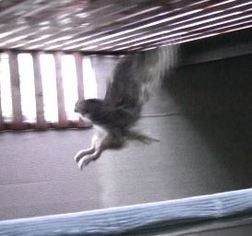 Only once the crows had been evaluated and released back to the wild, could the aviary be sterilized and the owl moved in. Even in the K Aviary, the owl's movements are hampered by low ceilings and tight quarters. When WildCare moves to our future home on the Silveira Ranch property at McInnis Park, our Wildlife Hospital will have full-size aviaries built to exact specifications for rehabilitating birds like this massive owl. We can't wait! Watch video of the owl showing off his flying ability in our too-small on-site aviary below, and learn more about WildCare's future and our Capital Campaign here...

As of this writing, this Great Horned Owl continues to show excellent progress. He eats well and the flying capability he showed in the K Aviary encouraged medical staff to transfer him to our off-site aviary which is large enough to allow him to really recover full flight. There the owl will have room to fly, rebuild his endurance and practice hunting for several weeks.

Then, once he gets a clean bill of health from medical staff, this magnificent Great Horned Owl will finally be released back to the wild in his home territory in Lake County. And what a glorious day that will be for him, and all the WildCare staff and volunteers that have made his return to health possible!