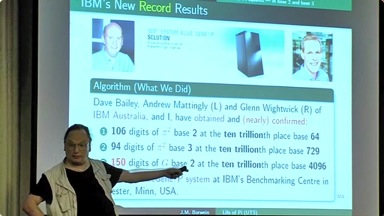 Borwein lecturing at University of Technology Sydney on March 14, 2011

Why, might you ask, should anyone want to celebrate a mathematical constant which allows you to calculate the area inside a circle?

As unlikely as it may seem, the number pi, or 3.14159... has been crucial to the development of modern life. As far back as the ancient civilizations of Babylon and Egypt, people needed approximations of pi to deal with the flooding of the Tigris, Euphrates and Nile rivers, for astronomy, and for surveying and building ziggurats and pyramids. The ancient Greeks were the first to study pi for its own mathematical sake.

Today, 4,000 years after people first discovered how useful pi could be, we are about to celebrate International Pi Day. The first time a day was dedicated to pi was on March 14, 1989 at the Exploratorium, a museum of science, art and human perception in San Francisco. The idea was the brainchild of Larry Shaw, a physicist at the center. (See picture of Larry Shaw, "Prince of Pi," at right.)

Since then, this museum and many others, as well as universities, schools and individuals have celebrated Pi Day by performing pi-related activities; some serious and some less so, such as creating pi puns; baking, throwing and eating pies; and singing pi songs. You can check out this year's bash at the Exploratorium here.

At first, Pi Day was a gimmick and a good joke, but now it is a big deal. Many North American and UK schools use it to spark interest in maths and science projects (for example, learning how the Greeks or Arabs did arithmetic; studying famous scientists like Gauss, Newton or Archimedes who worked on pi; or perhaps calculating the volumes of real pies before eating them).

Pi is represented by the Greek letter π, and it is the most important numerical constant in mathematics. You can compute the area of a circle of radius r, using πr. The perimeter of this circle has length 2πr.

Without pi there is no theory of motion and no understanding of geometry. For instance, the volume of a sphere of radius r is 4/3πr and that of a cylinder of height h is πrh.

Pi occurs in important fields of applied mathematics such as Fourier analysis and image reconstruction. It is used throughout engineering, science and medicine and is studied for its own sake in number theory.

Public interest in pi came to a head in 2009 when the U.S. House of Representatives formally declared March 14 National Pi Day, in House Resolution number 224. The Bill grandly begins:

"Whereas the Greek letter (pi) is the symbol for the ratio of the circumference of a circle to its diameter... "

After many more "whereases," it resolves...

"That the House of Representatives (1) supports the designation of a Pi Day and its celebration around the world."

The bill urges schools and educators to help learn about pi and generally engage students in the study of mathematics.

The growing interest in pi has seen it become firmly established in popular culture. Pi has been featured in such TV shows as The Simpsons and Star Trek, as the title of a Kate Bush song, in the movies The Matrix, and Pi; and in the 2001 novel Life of Pi by Yann Martel. Oscar-winning director Ang Lee has just completed a 3D movie version.

Things you can try

Pi has even inspired the invention of a new literary form called 'piems.' The challenge is to write a poem where the length of each word is the same as the number in the pi sequence.

For example, the first eight decimal places of pi can be recalled with the phrase: "How I need a drink, alcoholic of course" (to represent 3.1415926). Some piems are thousands of words in length. And there is money in piems. A student won 250 euro for a 2011 piem in Spanish.

If you're better with numbers than words, some folks prefer to memorise pi for themselves. The current Guinness World Record for remembering pi is well in excess of 60,000 digits. If you want to give it a try, memorisers typically add 10 or 15 digits a day to their total.

But just as climbers still climb Mount Everest, this is certainly not the end. Within the next ten years a quadrillion digits will probably have been computed.

What makes things really interesting is that pi is an irrational number, so its digits never terminate or repeat. While it never runs dry, we cannot even prove that the decimal expansion of pi has infinitely many sevens, let alone that it is normal, although I would bet it is (in other words that it has equally many ones, twos, threes, etc). My co-workers (including Alex Yee) and I have just completed a research paper analyzing roughly 16 trillion bits (binary digits) and have concluded it is almost certainly normal.

When we draw a picture, pi seems very random. The figure to the left shows a 'random walk' on the first two billion binary digits of pi.

The picture to the right does the same thing for a pseudo-random string of bits. In each case we change colors as we walk and march through the spectrum -- from red through indigo and violet and back to red.

If you go to the web you can explore a ten billion step gigapan movie-walk on pi.
While it is very likely we will learn nothing really new mathematically about pi from computations to come, we just may discover something truly startling. That was part of the punch line in astronomer Carl Sagan's novel Contact, when he suggested that alien life forms encoded messages to the human race in the numerical value of pi.

If you want to find out more about the many faces of pi, try my online talk here or listen and watch last year's talk here.

An earlier version of this article appeared for 3/14/11 at ABC Science Online.