Pie is popular, but we love pi too -- even if that love is sometimes misguided.

Consider the overwhelming response in recent days to a meme expressing some mind-blowing "facts" about the celebrated constant -- the ratio of a circle's circumference to its diameter. We ate it up. Countless people were moved to post the meme on social media sites. The meme even showed up on the Facebook page of actor George Takei, best known for his portrayal of Lieutenant Sulu on the original "Star Trek" series. 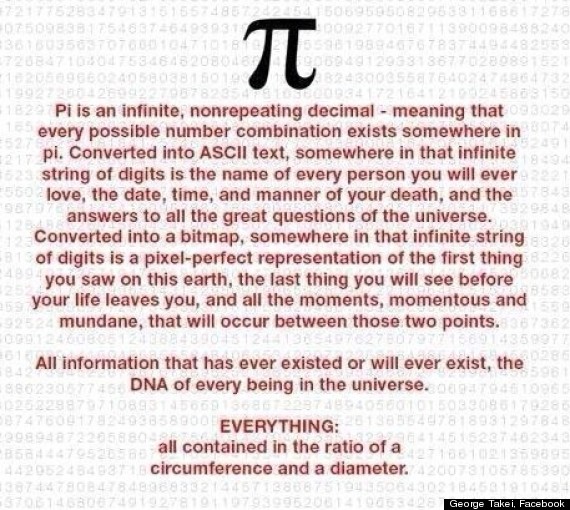 Problem is, this pi meme is misleading.

Pi is an infinite, nonrepeating decimal. But as to the truth of the meme's assertion that pi contains every possible number combination and thus can represent every possible combination of letters, mathematicians say no one knows for sure.

"If it is true, then indeed anything that can be converted to a string of digits by some means will appear somewhere in the decimal expansion of pi," Dr. Peter Alfeld, professor of mathematics at the University of Utah, told The Huffington Post in an email. "I don't think anybody knows, and it may be very hard or impossible to know. But that's a tautological statement, and it's true for infinitely many irrational numbers, which much diminishes the proposed special nature of pi."

Pi is "workaday rather than fascinating," Dr. Alfeld concluded.

Dr. Steven Strogatz, professor of applied mathematics at Cornell University and the author of "The Joy of x: A Guided Tour of Math, from One to Infinity," expressed similar sentiments in a telephone interview with The Huffington Post.

It's "probably true" but not proven that pi contains every possible combination of numbers, he said. But that property holds true for any so-called "normal number" -- one in which no digit, or combination of digits, occurs more frequently than any other. Since that's the case, the meme is "vacuous," he said, adding that he believes the meme is simply eliciting a "misguided sense of wonder."

"It gives no insight,'" he added. "The whole thing is dopey."