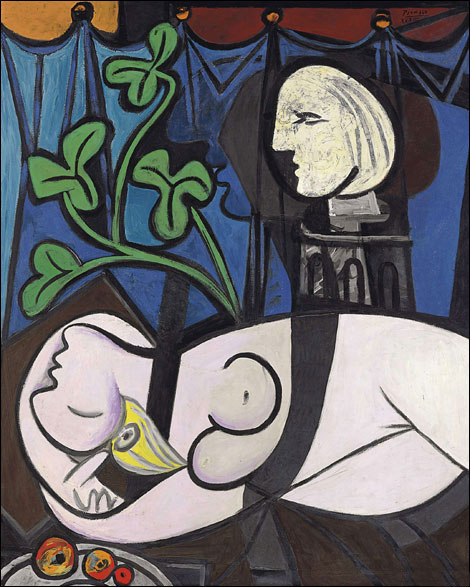 Who Was Bidding on Picasso's 1932 Painting of Marie-Thérèse Walter?

When Pablo Picasso painted "Nude, Green Leaves and Bust" in March of 1932, he was on the verge of international fame. As his biographer John Richardson states, his June 1932 exhibition at the Galerie Georges Petit "...would have world-wide repercussions; and would establish Picasso as the greatest modern artist." Picasso, who had turned 50 in October of 1931, was at the peak of his artistic virility. He was also four years into an affair with a much younger woman who he had become his sexual servant and the muse for his art.

"Nude, Green Leaves and Bust" has a sadistic vibe, as do many of Picasso's other portraits of his young mistress Marie-Thérèse Walter. He had in fact asked her to read the memoirs of the Marquis de Sade. Walter, who hung herself in 1977, once told an interviewer that Picasso had enjoyed having total psychological power over her. It was a sacrifice she made for "art." Arianna Huffington, the author of "Picasso: Creator and Destroyer" says of Marie-Thérèse: "She was an object that he alone possessed, proof of his power and sexual magnetism."

"Nude," which Picasso's biographer John Richardson says "celebrates the feminine submissiveness," depicts a woman as a kind of obedient decorative motif set among potted philodendrons and a plate of apples. It also includes a second image of Marie-Thérèse in the form of a work of art: an alert classical bust. Lurking behind both images, the artist's magnified profile appears as a black-lined shadow on a blue curtain. The artist's phantom presence was meant to camoflage his participation in the affair, but it also suggests that he is in control of his love object. Riffing on an idea often used by Matisse, Picasso fantasizes himself a sultan, and Marie-Thérèse is an odalisque in his harem. 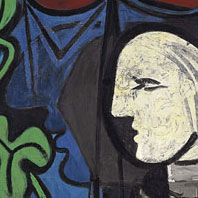 Detail of "Nude, Green Leaves and Bust" with Picasso's profile in blue

In a 1932 essay, the noted psychiatrist Carl Jung described Picasso's imagery as being similar to that of his schizophrenic patients. Writing about Picasso's work in general, he could have been discussing "Nude, Green Leaves and Bust" specifically when he wrote:

"The picture leaves one cold, or disturbs one by its paradoxical, unfeeling, and grotesque unconcern for the beholder."

When "Nude" sold for $106.5 million earlier this month, there were eight clients vying for the work, two of whom continued their tussle past the $88 million dollar mark. Picasso, by the way, liked a good struggle. He once commented that the sight of Marie-Thérèse and another mistress, Dora Maar, wrestling on his studio floor was "one of his choicest memories."

It is doubtful that any of the avid bidders was thinking about Picasso's infamous quip that "...to like my paintings, people really have to be masochists." It also seems doubtful that any of the bidders were women. Picasso's portraits of Marie-Thérèse seem to attract wealthy, powerful men like casino owner Steve Wynn who famously stumbled and put his elbow through "Le Rêve" another 1932 depiction of Marie-Thérèse Walter.

What the eight Christies bidders shared, on the same day that a panicked Dow Jones Index briefly fell 1,000 points, was the fantasy of owning an image of power that they hoped would transcend time and economics. Dealer Richard Feigin attributes the astonishing price to "...a lot of money going around. It doesn't want to sit in currencies so it goes into art." New York art dealer Guy Bennett commented that certain masterpieces are "Recession-Proof." Picasso's bubble is apparently not ready to burst, or so the dealers say.

It wasn't always that way. Picasso wasn't always such a cold man, and his works were not only available to the super-rich. At one point, Picasso's art dealt with life on the fringes, and was something that wouldn't sell at all. 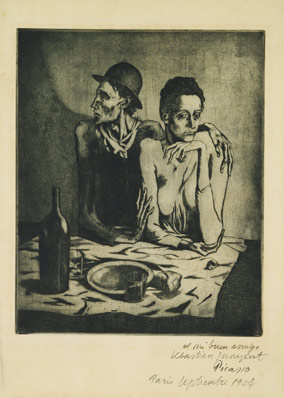 When Pablo Picasso etched "The Frugal Repast" in 1905, he couldn't afford a proper copper etching plate. Instead he worked on a used zinc plate, which still bore traces of a landscape image, scraping his lines with a sewing needle. Copies of the print, which depicts an emaciated blind man and his consort hovering over a some heels of bread and a cheap bottle of wine, were then offered for sale for a single gold franc, about five dollars. When none sold, the struggling artist gave them away to his friends.

To put it another way, the etching was "worthless" except as a work of art that communicated feelings to a group of intimates. What kind of feelings? The Museum of Modern Art, which now holds one of the original copies, reminds us on its website that:

"The "Frugal Repast" reveals the artist's feeling for humanity, especially for the poor and others on the fringes of society."

This empathy for others, which was an important aspect of Picasso's early work, faded as his fame grew. In 1913 the original plate of "Repast" was re-faced in steel, so a larger set of now valuable etchings could be printed. Somehow this seems a metaphor for the transformation that Picasso himself went through over time. As the demand for his work grew, the artist showed his steely side, becoming increasingly remote and detached. The story of his life and art has been well documented by John Richardson, whose most recent volume "A Life of Picasso: The Triumphant Years, 1917-1932" tells the story of the artist's progress and transformation.

Coming back to 2010, something needs to be said about the imperial prices paid for modern works by Picasso and others in the past decade. Who were those anonymous bidders phoning into Christie's on May 4th?

Interestingly, Christie's recently reported that "... clients in the Middle East increased by 30% in 2009, the highest increase of any geographical region in 2009, followed by Greater China with 20%. On the evening when "Nude" was sold, Edward Dolman, the CEO of Christie's told the New York Times that "The market is much stronger than we expected, with depth of buying from Russia, China and the Middle East."

In 2007, a record price in excess of $72 million dollars was paid for a Mark Rothko painting by Qatari Emir Hamad bin Khalifa al-Thani. The painting now resides in a $300 million dollar museum in Qatar, designed by I. M. Pei. What would Rothko, a Russian born Jew and lifelong leftist, have to say about the display of his work in a nation that was cited by a U. S. State Department report on "Trafficking in Persons" as a country where laws against forced labor are "rarely enforced?" Hell, he wouldn't even allow his paintings to be hung in the Four Seasons Restaurant in New York.

If I had to make a guess, I would expect that "Nude, Green Leaves and Bust" will soon hang in the Middle East. If it does, would its theme of feminine submission raise any eyebrows? If anything, the "harem" vibe of the work may be one of the factors in the high price it realized. Just thinking about this work, painted on March 8th -- now International Women's Day -- hanging in a country that observes Shari'a law opens up a complex set of intrigues and issues. How would a Picasso nude be interpreted in a country where it takes the legal testimony of two women to equal that of one man?

Then again, there are still wealthy Americans who might have been bidding. Maybe Steven Cohen, the hedge fund billionaire who had planned to purchase Steve Wynn's Picasso before it was punctured, might have been the winner. Or perhaps a Russian oligarch, flush with oil and gas revenues? Then again, China has more billionaires than any other nation, and they are becoming more and more interested in art collecting.

Speaking of Steve Wynn, it is worth mentioning what he said after reflecting on the he accidentally caused to "La Rêve:"

In an era when the world economy is increasingly fragile, Wynn's sentiment seems almost quaint. Keep in mind, the accident to his Picasso caused its planned sale for $135 million to be cancelled, and the repaired painting is now said to be worth only $95 million.

Paintings, it seems are "Recession-Proof" commodities in a world where people generally mean less and less. To paraphrase comedian and art collector Steve Martin, it is a world where "business associates" are even better to have than friends. Picasso apparently has some new ones, and they can pay well.

If and when the identity of Picasso's most recent buyer is revealed, it is very likely to be a man who values art more than he values people. Men of that sort may lurk behind a curtain, but we may still recognize their profile in the shadows. "Nude, Green Leaves and Bust" was painted during the Great Depression, another time when powerful men especially cherished their fantasies of dominance and control.

Video of Christie's Bidding for "Nude, Green Leaves and Bust"