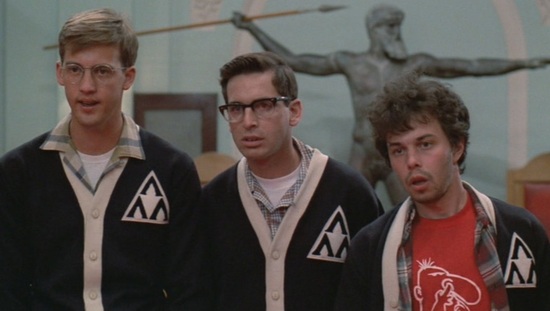 In a landscape of famous fictional nerds, it is difficult to pick one more unique than Booger. Played by Curtis Armstrong in 1984's Revenge of the Nerds, Booger preferred stained T-shirts to pocket protectors, and farts over facts. The character was a gross turd of a nerd, and an immediately beloved one in the classic '80s comedy, now out on Blu-ray for the first time.

The actor -- shown above right, next to costars Anthony Edwards (left) and Robert Carradine (middle) -- gained fame from character roles in Risky Business and Moonlighting, but it was Revenge that Armstrong is still most remembered for. Characteristically Armstrong is far from Booger, yet still embraces the role (his Twitter handle is @CurtisIsBooger). Along with Carradine, Armstrong is executive producer and host of King of the Nerds, a competition show on TBS that tests the expertise of passionate fans. He has also voiced the Booger-tribute character Snot on Seth MacFarlane's American Dad -- as well as taking on a pretty cool turn as the angel Metatron on Supernatural.

Since Revenge of the Nerds debuted 30 years ago, the geek has inherited the earth - or at least much of popular culture. Super heroes and Sheldon Cooper are super nerds of fiction, while Neil deGrasse Tyson, Wil Wheaton and Felicia Day prove that not only is being a nerd cool, but nerd matters.

But in 1984, "nerd" was still an epithet when Revenge of the Nerds let the little guys -- the Tri-Lambs of Adams College -- win in their battle for respect and equality (and panties).

To promote 20th Century Fox Home Entertainment's Blu-ray edition of the 30-year-old comedy, which includes the Revenge TV pilot, deleted scenes and commentary, Curtis Armstrong joined me to discuss the anniversary, his legacy as Booger and the evolution of nerd culture.

What are your immediate thoughts about it being 30 years of Revenge of the Nerds?

It's odd because I hadn't given it much thought. Last year just happened to coincide with a big year for anniversaries. It was the 30th anniversary of Risky Business, my first movie, and I turned 60. They made me realize we were coming up on Revenge of the Nerds.

To me, it's astonishing that much time has passed. It is not like it feels like it was just yesterday, exactly, but it's been part of my life for so long now. I have been living with the fact that I was Booger for so long it seems like its just part of my life.

Where are nerds 30 years later? What is the state of the nerd union?

I think it's stronger than ever, the nerd union. It has been supported and encouraged by things we never anticipated at the time. The idea of something like comic con would not have been on our radar in 1984. I know that there were already Star Trek conventions - I had been to the first one in Detroit, in fact, in 1972 - but the overall nerd culture was still nascent at the time. So now, people who were in their garages with their comic book collections have access to millions of people in the world in seconds.

There's a lot of strength in nerd culture right now. One of the things that has happened as a result of that is people who don't consider themselves nerds have embraced some elements of nerd culture. Not everyone who watches Big Bang Theory or King of the Nerds does considers themselves to be a nerd, but they certainly enjoy nerds and that's pretty terrific.

When did you see people start embracing the word nerd, and do you think Revenge was part of that?

At the time I wasn't really tracking all of this. I'm not going to say Revenge of the Nerds was responsible for everything in nerd culture. But I do think you could make an argument that that attitude began with the last scene in Revenge. The last scene - the scene I probably love above all in that movie - we're at the pep rally and come out in front of everybody as nerds, and encourage these people of different generations to join them in their nerdness. I get teary thinking about it and you could certainly make an argument that that was the beginning of embracing nerd culture by everybody.

At what point did you notice that people loved Booger?

As soon as the movie came out, I started getting feedback, but it wasn't really until the Internet I realized the full breadth of interest in that character. Oddly enough, technology gave Revenge of the Nerds a second life. It was the Internet and comic cons that made me realize. The first comic con I went to was as a spectator but couldn't stay there because I was mobbed by Revenge fans.

In the movie, the nerds were underdogs, but with nerds being mainstream, do you see a change where nerds sometimes become the bullies of the "not really a nerd" nerds or women nerds?

Any kind of social movement, for lack of a better word, when it achieves success, there tends to be elements of that. With nerds, I think that happens occasionally but probably not that often. As far as "women nerds," one of the things Robert and I were adamant about when we created King of the Nerds was that there would be parity in gender. We are fathers of daughters and really aware of the fact that nerds have no specified gender and we wanted to show that. On our show, the first two winners were women because they are as big nerds as anyone.

There is a tendency to use the words "nerd" and "geek" interchangeably, but what do you think is the distinction?

Then what are you specifically a geek about?

I became a fan of Sherlock Holmes, the books, when I was 10. And I'm still as passionate about Sherlock Holmes as when I was 10. I was never particularly into comic books but was a total geek in the areas of The Beatles and Motown groups or British Invasion stuff. That was in the 60s. I wasn't into science or into math, and didn't have those geek qualities, but when it came to books? That's where my geek obsession lies. That hasn't changed a bit.