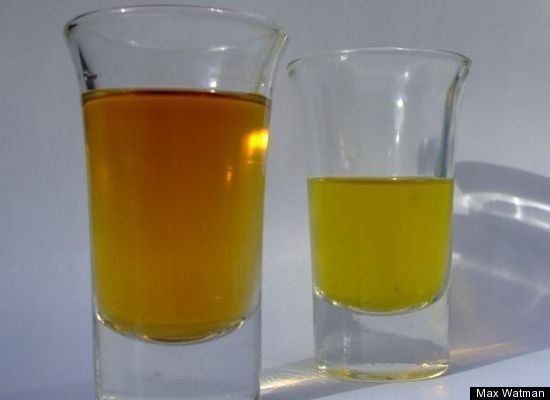 A shot of whiskey backed up with a shot of pickle brine tastes good (way better than it sounds), but I feel as if there's something more to the pickleback: sentimentality, comfort. The pickleback is the macaroni and cheese of the cocktail world.

When I think of drinking and pickles, I think of two things -- first, the collection of rummies that used to hang out on the grass in the park near my old home in Brooklyn. They'd drink pickle juice out of the jar in the morning, and they definitely call into question the idea that the practice is good for you in any way or prevents hangovers. You got the shakes just looking at those guys. I also think of an old steam-table Irish bar called the Shandon Star, once at 8th Avenue and 55th Street in Manhattan, but sadly gone. The drinks were cheap (incredibly so) and the bartenders were friendly. Comfortable black vinyl booths lined the wall, there was a jukebox in the corner, the bar was long and never full. Rarely was any food on the steam tables, but there were barrels of pickles. An old man worked the floor. More of a porter than a waiter, he was always in need of a shower and a shave, and his white kitchen shirt would hang loosely off his bony frame, open to the fourth snap. He'd bring pretzels to your table and if you asked for a plate of pickles he'd wordlessly deliver complimentary cherry peppers and sour pickles. It was the kind of bar that made you want to read The Daily Racing Form.

The pickleback is a simple thing: a shot of whiskey chased by a shot (or a half a shot) or pickle brine. It seems safe to bet that might have been first served at the Bushwick Country Club, where they use Old Crow bourbon and brine from McClure's Spicy Dills. It's taken off, and gets written up appearing at good, popular bars on both coasts. At Elixir in San Francisco, owner H. Joseph Ehrmann serves his house barrel of Buffalo Trace whiskey. (For the record, I've had the whiskey from the barrel he chose, and it doesn't need backing, it's phenomenal.) At the Rusty Knot in Manhattan, they serve Jameson's.

I spoke to John Wiseman, who is partnering with the Ruotolo brothers to open a new place in Williamsburg called The Whiskey Brooklyn. Picklebacks will feature prominently, he says, and they'll go along well with the coolers of canned beer you'll be able to order, and the shuffle board tables. The coolers aren't ironic, insists John: "It's about function. You don't have to fight your way back to the bar."

The pickleback is an odd trend for the cocktail world. There is no mixing, there are no housemade tinctures, no rarified ingredients. There isn't even any ice.

The last decade has been revolutionary for drinking in America. A friend of mine wrote that in the past, the only qualification needed for being a bartender was having been a bartender. That's changed, and lots of places bring as much care and talent to the bar as they would to the kitchen. The world isn't exactly awash in French 75s, but a greater proportion of it is.

That said, I was beginning to feel that things were souring. Over the last few years I have had countless experiences in bars (even ones I like a lot) that have made me think that we've lost sight of what's really supposed to be happening. Even if you take drinks very, very seriously, they are still supposed to be fun. Alcohol is a social lubricant, a refresher, a delicious distraction. And if all I want is a drink and a joke, a shot and beer, some backslapping fun, I'd still like to be in a good bar, where if one among us orders a daiquiri, no one behind the stick reaches for the handle of the slushie machine.

I brought home a bottle of McClure's Spicy Dills last week, and my first thought was that despite the pedigree -- they are often mentioned as the brine used at the Bushwick Country Club -- fancy, expensive pickles were contrary to how I felt about the pickleback. (After all, it's not as if I'm pulling down the bottle of Parker's Heritage for this tipple.) But there is no denying that McClure's pickles are astonishingly good. The flavor is complex and layered, forward and intense.

I shot Old Crow Reserve and McClure's Spicy brine. I learned that the key is the waiting -- you have to the let the burn of the whiskey build for a second before you shut it down with the salty goodness of the pickle juice. (None of that hurried, coke-spoon-inspired nonsense of lick it/shoot it/suck it.)

Realizing that not everyone has access to McClure's, I tried out some Vlassic Tabasco pickle brine, and was pleased with the result.

But I'm not a shooter. I don't sit around gulping shots of whiskey. I do most of my drinking at home and I like to sip and savor. This led me to a drink I've named the Bourbon and Brine. I can't say that I invented it -- simply because the chances of that seem slim. I've never seen it, though. People have been making pickled martinis, but I think that brine simply destroys the glassy nature of the gin and buries the subtlety of the vermouth. Whiskey, especially something like Old Grand Dad Bottled in Bond, can stand up to it.

I poured 2.5 ounces of bourbon over ice in a jelly jar, measured in 3 teaspoons of McClure's spicy brine, and gave the drink a short stir. The result was really surprising. The char of the oak comes through, the salty brine wakes it up. It's delicious. 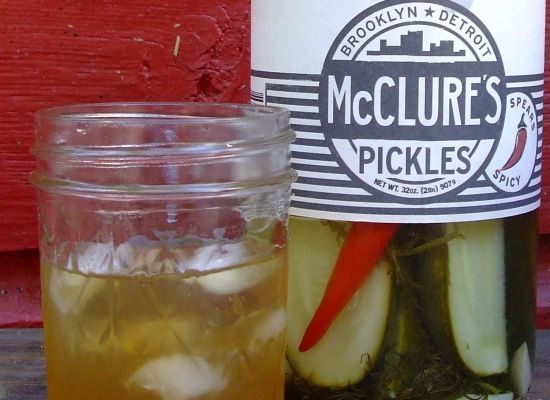 Either way you drink it -- as shots or as a bourbon and brine -- adding pickles to whiskey brings us a little closer to the old Shandon Star and offers up a little bit of comfort and fun, and that's good news.