The most difficult part of shopping for clothes by yourself -- aside from the claustrophobic sense of loneliness that it inevitably brings (just me?) -- is that you don't have anyone to judge your prospective new outfit or tell you honestly how you look.

How are you to decide whether to buy those gabardine trousers without someone to tell you if they exaggerate your behind? Are you really supposed to trust your own eyes when it comes to that gingham dress?

A new fashion company called Pickn'Tell has a high-tech solution to this shopper's dilemma. It allows you to try on clothes alone while still receiving to-the-minute critiques from friends, sitting at home by their computers. Pickn'Tell's vision -- now available at two clothing boutiques, in New York and Los Angeles -- involves a web-connected mirror, with an outward-facing miniature video camera installed. Shoppers can try on different outfits, record their images in mirrors and then automatically post the videos to Facebook or Twitter, where friends and family members can give the thumbs up or thumbs down.

Say goodbye to awkwardly holding up a camera phone in order to snap a shot of an outfit: Now, the mirror is recording you.

(Before you run around screaming about how creepy this sounds, know that the company has no plans to put its camera-loaded mirrors in dressing rooms. These mirrors would be for the floor of the store only, not where customers are undressing, according to Pickn'Tell's vice president of business development, Mark Frieser).

Here's the technical setup for these robo-mirrors: Pickn'Tell takes a full-length mirror and cuts out a rectangle the size of a 10-inch tablet in the upper right corner. It affixes a tablet inside that rectangle, so that the screen of the tablet can act as a sort of monitor and communications hub for the shopper. Pickn'Tell attaches a webcam via wire to the tablet. 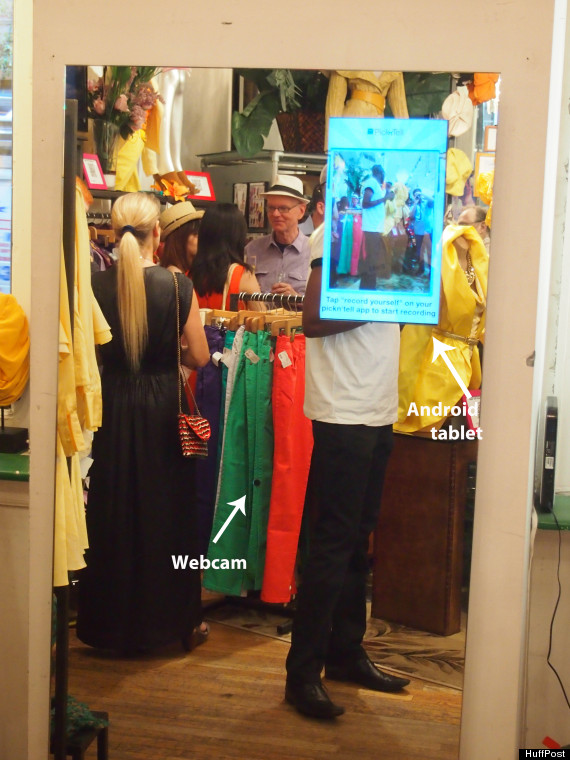 Using the Pickn'Tell app on an iPhone or Android device, a shopper can connect to the mirror's tablet by inputting a unique connection code; that code turns on the camera inside the mirror. Using the smartphone, the shopper can then direct the mirror to either record a video for five seconds or take a snapshot. That footage then appears on the shopper's smartphone, which he or she can then post to Facebook or Twitter, for friends to comment on. 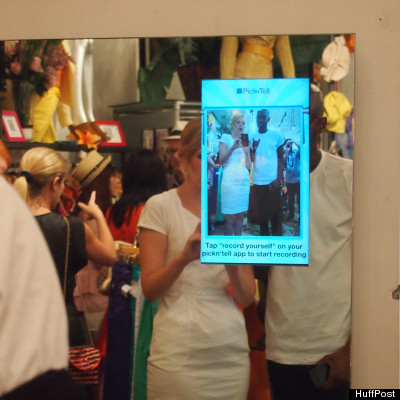 At a press event for Pickn'Tell, two employees demonstrate how to use the Pickn'Tell smartphone app to record an image in the mirror.

The Pickn'Tell app has several other fashion-related functions: a barcode scanner, with which you can scan the barcodes of products you're interested in and add them to a potential buying list; a list of stores and boutiques, with coupons, catalogs and pricing information; and a miniature social network, so that you can follow which articles of clothing your friends envy or appreciate.

Perhaps most fascinating and unique is the option to connect with a Wi-Fi enabled, webcam-loaded mirror at a store and record your image and send it to your social networks. Other social-shopping apps, like Pose and VIZL, make store catalogs available on a smartphone and let someone share fashions with friends. But Pickn'Tell installs hardware in mirrors to facilitate that sharing.

Convincing store owners to allow third-party webcams in their mirrors -- and then assuring shoppers that recording themselves in public is safe -- will be an obstacle for Pickn'Tell. So far, the startup, based in Tel Aviv, Israel, has installed its mirrors in trendy Runway Couture in New York City's SoHo neighborhood and in Bee Free Boutique in Los Angeles' Silver Lake district. Company representatives hope that, by the end of the year, their wired mirrors will be within a 15- to 20-minute car ride from Los Angeles (or a quick subway trip from New York), Frieser said.

Pickn'Tell is also working on a less expensive tablet-only experience -- a Pickn'Tell Mini, as an Apple watcher might joke -- which Frieser pitched as a good fit for jewelers, eyewear stores or other retailers with space limitations. Instead of looking at how eyeglasses appear in a small mirror, imagine looking at yourself on the screen of a tablet with the front-facing camera, with an option to send a video of your possible new specs to Facebook.

Will privacy-conscious shoppers ever accept the idea of filming themselves in a mirror? An informal office poll found that most considered the idea unsettling or creepy at first, then warmed to it with assurances that the cameras stay out of the dressing rooms and that the security protecting the cameras from hackers is airtight. Pickn'Tell will also have to convince customers that downloading its app and sharing data with it offers more value than simply taking a photo or video in the mirror with a smartphone and texting it to friends. An app with a cleaner design that is less prone to crashing might help with the latter goal.

For the young Pickn'Tell then, there are many obstacles to retail ubiquity. The reality of high-tech clothing stores, meanwhile, is creeping closer and closer: Mirrors stuffed with webcams and tablets are expected to emerge:Clothes will be virtually rather than physically tried on; items will be paid for on your smartphone as the cashier goes the way of the milkman. There soon might not soon even be any articles on the racks: Microsoft is showing off a 3-D printer that can spit out an item with your exact size specifications the moment you opt to buy.

The future is infiltrating the retail shopping experience. The next time you try on an outfit at J.Crew or Marshalls then, remember to smile and say "Cheese!"