NASA's amazing Spirit and Opportunity rovers have survived (and generally thrived) on Mars for more than 25 times their expected lifetimes, returning spectacular images and other data that are helping scientists literally rewrite the textbooks about Martian history. Usually in the space probe business your camera is zooming past a planet or moon or asteroid or comet at breakneck speed and you basically have to take whatever you can get, given the limited lighting, power, time, or other constraints. The longevity of the Mars rovers, however, has given us the luxury -- and it is a luxury! -- of much more time devoted to photography than previous missions, much more bandwidth for sending pictures back to Earth, and better resolution cameras compared to previous Mars missions. The result is now more than 250,000 photos beamed back from the rovers since 2004. A subset of them, specifically selected for showcasing in glorious full-page color and foldouts in "Postcards from Mars," were taken with an eye for lighting, framing, color, depth of focus -- the same kinds of factors that Earth-bound landscape photographers routinely consider. My goal in pulling together this collection of photos from the rovers has been to share the beauty, desolation, grandeur, and sometimes plain old alien strangeness of the Red Planet. Postcards from Mars is a partly scientific, partly artistic, partly abstract, partly realistic photographic story about what has been a very human exploration adventure on another world-just experienced remotely through robotic eyes. 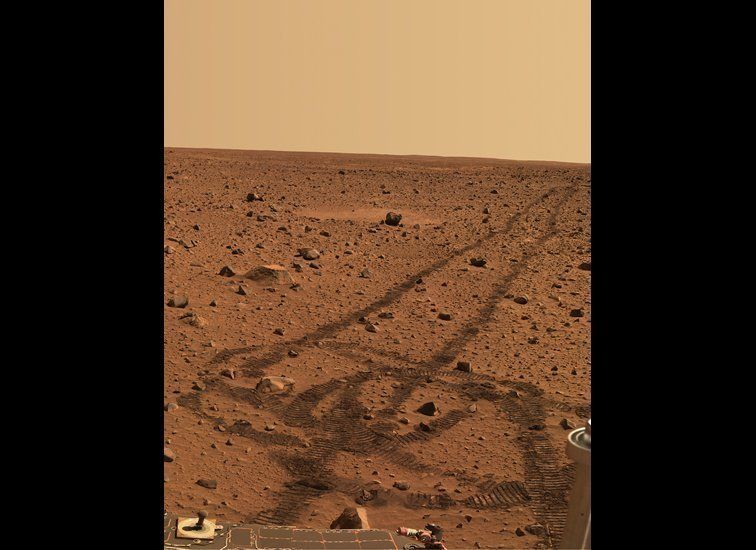 1 / 16
Spirit
While driving over the reddish rocks and soils of Mars, the rover's wheels dig below the thin dusty layer and reveal darker, brownish soils just below. The circular tracks are "pirouettes" that the rovers occasionally do to align their radio antennas for best possible communications. <em>Spirit rover, Pancam image, mission sol (martian day) 141 (May 26, 2004). From "Postcards from Mars" by Jim Bell; Photo credit: NASA/JPL/Cornell University</em>