At the center of the foreclosure fraud crisis lies something called "MERS," which is usually described in news reports as a computer system and database. But a thorough review of the company's publicly available documents show it's much more than that. We reviewed hundreds of pages of bulletins, newsletters, and manuals, along with PowerPoint presentations, user forums and other website material and several hours of training videos and other recordings. This is the first of a series of reports on what we found.

As the following images show, MERS is a nebulous, database-driven entity created by the mortgage industry. It's designed to let lenders swap mortgages electronically without being slowed down by inconvenient courtroom rules. MERS is "Digital Life" for mortgages, an electronic shell game that makes it hard to track the real party behind a loan.

The company's own publicly available documents paint the picture of a legal shapeshifter that appears before the court as the lender and title holder, then morphs itself into a mere service organization when it's time to take responsibility. 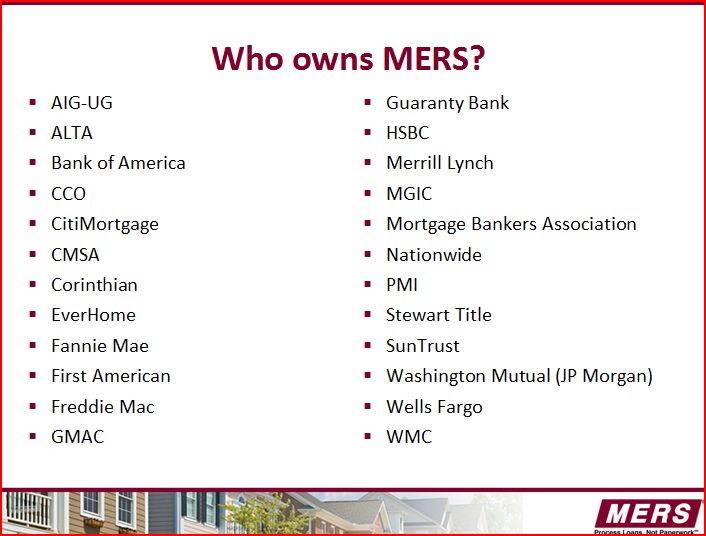 "MERSCORP" is an entity created by the mortgage industry, including the Mortgage Bankers Association (yes, that would be the same Mortgage Bankers Association that appears to have walked away from its own commercial real estate loan -- after its CEO lectured homeowners on honoring their debts). The other owners are a who's who of TARP recipients, HAMP violators, and known lawbreakers. 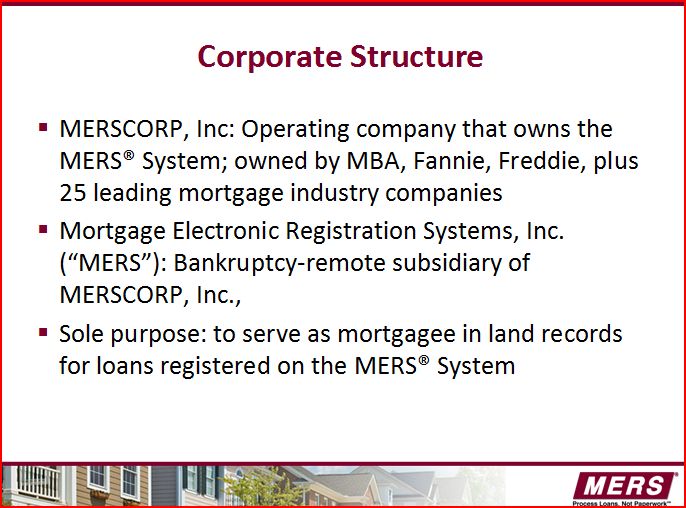 "MERS Inc." is a subsidiary of MERSCORP which was created for the sole purpose of acting as if it held the note on a home loan.

Why do institutions use MERS? Here's their pitch: 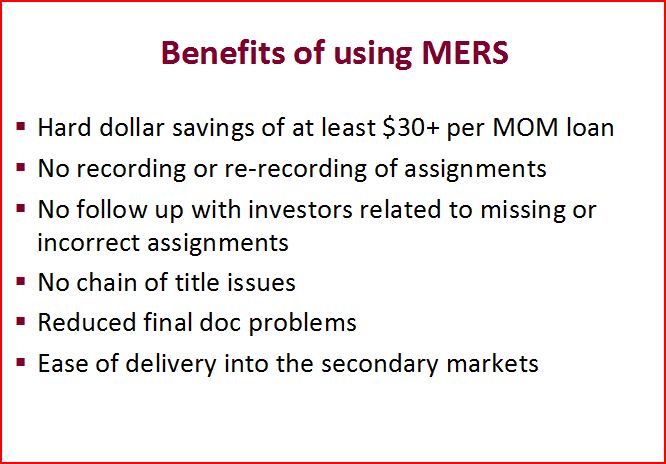 Judges across the country might not be amused to learn that MERS promises"no recording or re-recording of assignments," since that's exactly the problem at hand. As for "ease of delivery into secondary markets" -- that is, the bundling and re-selling of mortgages -- there's no question that MERS has enabled that. MERS provides the chips for the housing market casino. And as for the claim that there will be "no chain of title issues," that's a hard claim to defend now that Attorneys General for all fifty states are investigating the matter.

There are at least two ways "MERS Inc." (that synthetic company that's a MERSCORP "subsidiary" becomes the mock holder of a loan, but the preferred way is to have lenders employ a "MOM" arrangement. MOM stands for "MERS as Original Mortgagee." Some nerdy types may remember the sinister corporation run by an overlord named "Mom" in Futurama. While this "MOM" is also technology-driven, it's essentially a legal device: 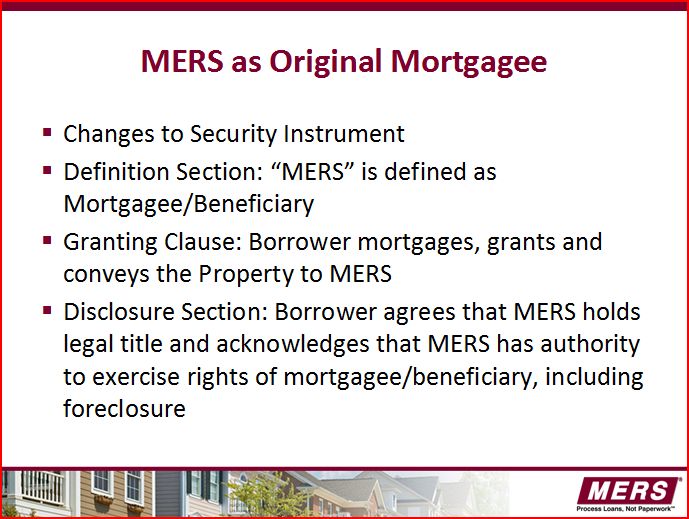 In order to obtain their home loan, the lender demands that the borrower -- that's you, Mr. and Mrs. Homeowning American -- "mortgages, grants, and conveys" their property to the vague "MERS Inc." The homeowners agree that MERS "holds legal title" and has the authority to exercise all mortgagee rights, "including foreclosure."

So MERS owns the note, right? Not so fast: 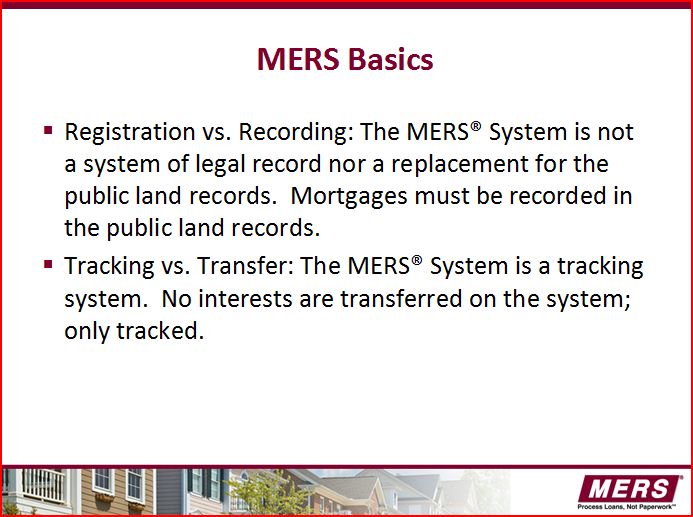 Having a "MOM" doesn't make MERS Inc. the genuine note holder any more than wearing a dress makes Norman Bates his own mother.

If your home loan was produced with a "MOM," the court has no record of who issued your original loan. If you need to challenge the legality of that loan, you're dependent on MERS to tell you who the other party really was. When it comes to the title, the courts know nothing -- and mother knows best.

That can lead to a Catch-22 situation: When homeowners want to bring the lender to court, MERS is the entity that shows up. But MERS bears no legal responsibility: It didn't issue the loan and can't defend the transaction. And when homeowners or their representatives contact MERS, they're told its not MERS' responsibility to update the court records to reflect the true identity of the title holder.

But that's what the court record is supposed to show.

MERS Inc. -- the title holder of record -- is a legal entity. As far as the courts are concerned -- at least the ones that have accepted its ruse -- they hold your note. But that's a legal fiction. The real holder of the note is usually a bank you'd recognize -- like Bank of America, Wells Fargo, JPMorgan Chase, or Citigroup.

Who are the officers of this fictitious entity?

"Designated officers of the servicers" are "elected" as officers of MERS so that they can act on behalf of their own company while pretending to act for this artificial one.

"Loan servicers" are the companies that collect and process loan payments, and the big banks themselves act as loan service companies. As the Associated Press reported last year, Billions of dollars the government is spending to help financially pressed homeowners avert foreclosure are passing through -- and enriching -- companies accused of preying on the people they're supposed to help." These companies actually target people who are struggling to pay their bills, because they make more money from late fees.

Who are the largest loan servicers? Bank of America, Wells Fargo, JPMorgan Chase. and Citigroup Inc. That's right: The artificial corporation called "MERS Inc." holds your note as a facade, and it could very well name as its officers the very same bankers who issued your loan in the first place. (Or, as we're about to find out, not.) But in this case they're officers of "MERS," not their own organization.

There have already been lawsuits against loan servicers for wrongful foreclosure, misrepresentation, breach of contract, conspiracy, violation of state debt collection laws, and predatory lending, just to name a few. It's not as if we need another layer of obfuscation, confusion, and secrecy to further cloud the legal process. The owners of MERS are turning the corridors of justice into a hall of mirrors.

The Judge Calls It Fraud

Would a prestigious bank like JPMorgan Chase really deceive a court of law about ownership of a title? From a recent court ruling: " "The court finds WAMU (now owned by Chase), with the assistance of its previous counsel, Shapiro and Fishman ... knew that ... WAMU never owned or held the note and Mortgage ... the Court finds by clear and convincing evidence that WAMU, Chase and Shapiro & Fishman committed fraud on this Court ... a knowing deception intended to prevent the defendants from discovery essential to defending the claim."

Chase was only the servicer for this loan, but it wanted to score a foreclosure so it pretended that it actually held the title on the loan. That's the kind of deception that becomes vastly easier to carry out using the legal and electronic instruments provided by MERS. Was that why MERS was designed? They say no. MERS documents claim that the system was designed to provide transparency, consistent data, and a more streamlined system.

IN OUR NEXT EPISODE: How MERS "navigates through foreclosures." We'd feel a lot better about their attitude toward struggling borrowers if one of their training videos didn't use "Harry Homeowner" on "Poverty Lane" in Jacksonville as a test case. It doesn't make it look as if sympathy toward struggling homeowners is their Number One concern: 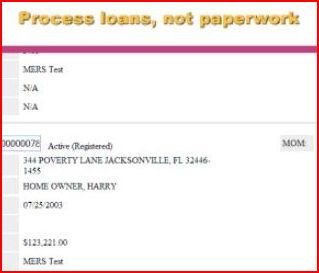 As you've probably guessed, there is no "Poverty Lane" in Jacksonville, FL - yet.