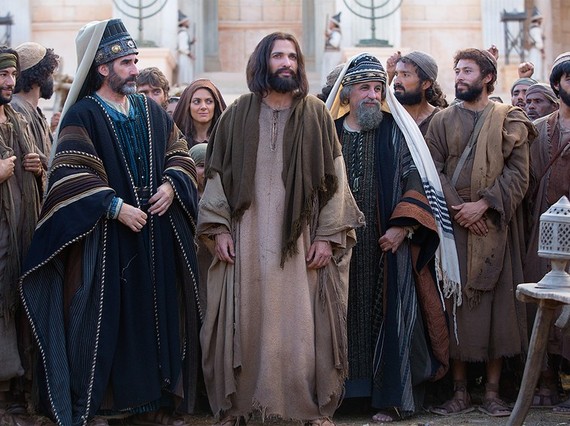 When I tuned in on March 29, 2015, for the National Geographic's film production Killing Jesus, adapted from Bill O'Reilly's book Killing Jesus, I was poised, pen in hand, to write about the return of Jesus the Tea Party guy. That's what O'Reilly gave us in his book Killing Jesus: Jesus kvetching about taxation and big government. In the National Geographic dramatization Jesus is still complaining about taxes (but who isn't). Here, though, he is more vigorously castigating the rich while praising and embracing the poor. The rich are clearly the villains; there is no suggestion of a trickle-down economic system that might share the wealth.

While the narrative does not add anything new, it may prove useful as a straightforward dramatization of the Gospels for bible classes and for others who wish to review and discuss the Gospel stories about Jesus. The production pretty much selectively follows the Gospels' depiction of Jesus' birth, ministry, and death, with a few embellished departures. For example, Elizabeth and Zachariah, parents of John the Baptist, join Mary, Joseph, and Jesus in their journey to Egypt, a journey they make in order to evade King Herod's order to kill all children in Bethlehem age two and younger. The couple accompanying Mary and Joseph is a cozy addition, but it didn't happen that way, according to Matthew's account of the event (Matthew 2: 13-14).

That said, in several important respects this production is unique as an authentic representation of the life of Jesus. Jesus, his family, and followers are portrayed as dedicated Jews. There is not even a hint about a new religion -- not until the postscript do we learn that after the crucifixion, Jesus' death and teachings did inspire a new religion that today has two billion followers. The production takes care to show Jesus' criticisms, as in the Gospels, as strictly directed against the Jewish leadership (the Sanhedrin) and, in particular, the ruthless power obsessed High Priest Caiaphas. Jesus deplores their superficial display of piety and charges that the leaders do not represent the true spiritual teachings of the Torah. Jesus fills in this omission in his sermons to multitudes of Jewish followers. Throughout the film, Jesus is called Rabbi.

Adding to the authenticity of the film is the absence of blond blue-eyed fair-skinned northern Europeans or Scandinavians. Jesus, his family, disciples, and followers, as well as other Jews, are conspicuously Semitic in appearance. They are dark-skinned, with dark, if not, black hair. Also, the attire of the Jewish villagers is spare--many are shown wearing plain Jewish shawls and headwear. Their dwellings, including Jesus' family abode, are crude and simple, true to the architecture for the poor and working-class in Galilee in the first century. These depictions--physical appearance, clothing, housing, Jewish artifacts --are dramatic departures from the Renaissance representations of Jesus and his fellow Jews.

Walk thru the Renaissance Gallery of any museum and you will see painting after painting jarringly at odds with the images in Killing Jesus. In these artistically magnificent Renaissance paintings you will typically be greeted by a blond, blue-eyed Jesus and other similar appearing "Semites" ensconced in palatial settings with regal attire. They are identified as strictly Christian with no indication of any connection to Judaism.

Let's just focus on one element common in Renaissance paintings: Jesus and others in his entourage displaying a crucifix. Imagine the reaction if in Killing Jesus, Jesus, his disciples, and others were pictured strolling near the Temple in Jerusalem and in the villages in Judaea and Galilee with crucifix staffs -- a feared and hated symbol at the time, associated with the tens of thousands of brutal crucifixions of Jews and others. It would be shocking, anachronistic, and blatantly false. Yet these false representations appear in a trove of Renaissance paintings. They would be the only images of the Gospel figures that Europeans would view for centuries -- and that we still see today.

On his July 26, 2014, O'Reilly Factor Broadcast Bill O'Reilly slammed me for my criticism of Renaissance art for depicting Jesus as a Christian at a time when he was a dedicated Jew and Christianity did not exist. Ironically, the National Geographic production Killing Jesus, Executive Producer Bill O'Reilly, confirms my point. Jesus is shown fiercely dedicated to Judaism, as in the Gospels. It's therefore not surprising that the word "Jew" appears eighty-two times in the Gospels and the word "Christian" not at all. In fact, it's safe to say that if Jesus and his disciples were to view Renaissance images, like the ones below, they might think they were cartoons.
(Baptism of Jesus by Ottavio Vannini , Holy Family with John the Baptist by Fra Bartolomeo, and The Last Supper by Fra Angelico) 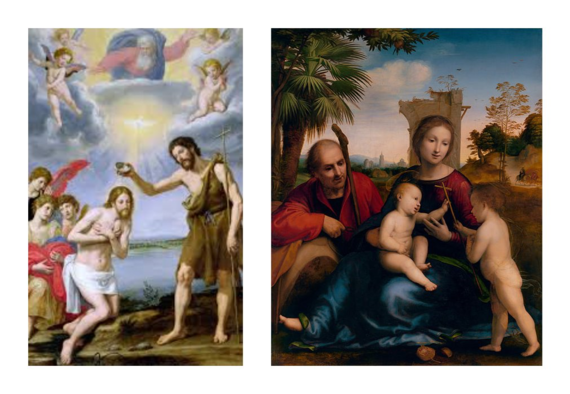 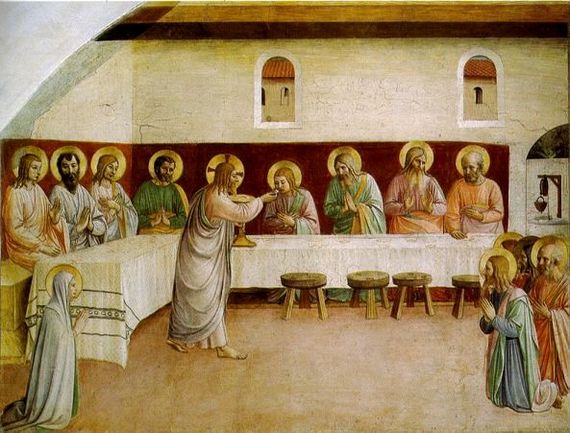 Art historians might do well to view the National Geographic production of Killing Jesus and afterwards re-examine Renaissance images. They might then finally acknowledge the falsification of biblical history in Renaissance artworks, which has contributed to the historic divide between Christians and Jews, a divide that is only now in the process of reconciliation and healing.

Kudos to Bill O'Reilly, script writer Walon Green, and the National Geographic Channel for setting the record straight by reminding us of the two sides of the Jesus story: Jesus the dedicated Jew and Jesus whose legacy is the emergence of Christianity. The film expresses Pope Francis' sentiment: "Inside every Christian is a Jew."