Climate change, global warming, sea level rise, ocean acidification, and biodiversity loss are all writ large in the skies of today's science and politics. So much of the hopelessness of where the human race has dragged planet Earth revolve around these issues. Homo sapiens is after all the worst of the invasive species, yet there is long lasting hope in some current human actions that can have long-term impacts with substantial, but in the grand scheme of things, relatively minor cost.

Invasive species are a major source of lost biodiversity. Beyond the global impact of human activities in terms of species loss, this is most apparent in island ecosystems where bird colonies can thrive in unparalleled abundance in the absence of natural predators, yet succumb to exclusion once such predators are introduced.

The history of the past thirty years of evolving techniques to rid islands of invasive species such as rats, mice, cats and rabbits is well told in the book Rat Island: Predators in Paradise and the World's Greatest Wildlife Rescue by William Stolzenburg. The stepwise development of eradication methods in a series of offshore New Zealand islands is remarkable in its tenacity, ingenuity and impact. Once freed from such introduced predators, the native bird fauna can recolonize and explode in terms of numbers and species diversity. The lasting success of a number of projects, both in New Zealand and in the Eastern Pacific is a true milestone, in contrast to the inexorable declines associated with global warming and associated issues.

In March 2011 the largest rat eradication project ever was seemingly successfully undertaken on the island of South Georgia, 800 miles southeast of the Falkland Islands. It is mountainous and 80 percent ice-covered year-round. The 2011 project used helicopters to spread toxic bait over 12,000 hectares. The expected minor collateral damage to non target species was encountered, but the short term loss of individual birds has already been more than compensated for by subsequent recovery in the newly rat free habitat. Because of the glaciers that run down to the sea, South Georgia is currently manageable as a series of distinct areas, many inhabited by rats. However with glacier recession apace the window of opportunity is melting. The plan of the South Georgia Heritage Trust, in collaboration with the South Georgia Government, is to serially eradicate rats from the remaining areas in the coming years, using glaciers as zonal barriers. This island group is already known as the "Serengeti of the Antarctic" because of its spectacular colonies of large seabirds -- penguins and albatrosses -- which are mostly immune from the rats. Success at this substantial endeavor would result in perhaps 100 million other birds recolonizing the main island from small, offshore rat free islands: prions, petrels, ducks and pipits, some found nowhere else. After two centuries of human-induced damage, South Georgia would once again host the greatest concentration of seabirds on the planet. 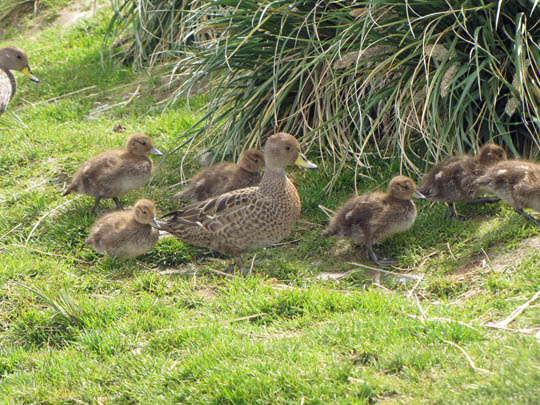 Michael Moore is an unpaid trustee of both the South Georgia Heritage Trust and the Friends of South Georgia Island. Learn more about this project at www.sght.org (and www.fosgi.org).