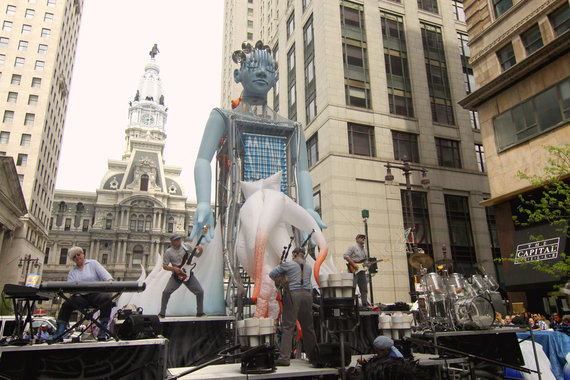 The Philadelphia International Festival of the Arts, sponsored by the Kimmel Center, held 60 events from April 8 -23. The piece de resistance was the street fair. One of the city's busiest thoroughfares, Broad Street, was transformed into a tropical beach complete with sand, 25 foot waterfall, and a pastoral countryside suitable for a picnic lunch.

More than 100,000 people flocked to see the performances of Flippen Out, a group of extreme trampoline athletes, Golden Mantises, human bugs dressed in lavish wicker costumes, or Cirikli Birds, beautifully decorated wooden puppets. The more adventurous could try a zip line or play one of the 12 colored pianos scattered on the beach. Lady Pneumatica, a 40 foot tall inflatable accordion, mesmerized the crowd while playing with the Pittsburgh Squonk Opera that has a reputation for making beautiful music from thingumajigs. Young and old alike tried to discern how to gracefully disembark from the penny farthings. Of course, like all street fairs, this one gave you the chance to overeat junk food or ride a Ferris wheel or carousel. 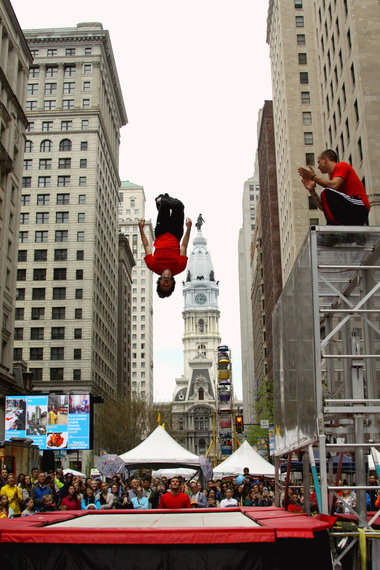 The free street fair was the perfect bookend to the fantastical gala on April 6 that opened the festival. The extraordinary dinner featured the premiere of the Mimi Lien designed Kinetic Tree, which came alive twice a night for the duration of the festival. The physical theater company's slow and deliberate pace of unfurling the tree provoked the audience to question standard time measurement as they watched the tree transform from sapling to multi branch tree in minutes rather than decades.

The singing of Grammy winner Rhiannon Gidden was perfectly capped off with a magical performance by Compagnie des Quidams, whose members danced in illuminated white horse puppet costumes. For a brief, shiny moment, it seemed that the Kimmel Center was where Centaurs roamed free. The inner child in me wanted to catch one to ride it off into the sunset. As I left for the evening, I was reminded of the Pablo Picasso quote- "Art washes away from the soul the dust of everyday life." (Video provided by Al B. For)

Memorable, mind blowing spectacles were not limited to the gala. A fiery ball of fire rose over Penn's Landing at a free public event held the first weekend of the festival. 20, 000 people over 3 nights participated in a multi-disciplinary artistic memorial to the thousands of migrant that have mysteriously disappeared in their attempt to find a better life for their families. "Article 13," a collaboration of the French theater company Compagnie Carabosse and a Mexican company that specializes in fire installation, was a welcome antidote to the current divisive tenor of the immigration debate and a powerful reminder that people are willing to die for what we Americans often take for granted.

The lineup for the third PIFA was stellar. I can hardly wait for the next one. The only disappointment was that local arts groups such as the Philadelphia Orchestra, Pennsylvania Ballet, and Opera Company of Philadelphia did not participate.