We often point to language as evidence of our species' superiority. But the way humans learn language may not be so foreign to other animals, after all.

A new study has found that the lowly pigeon may provide insight into how young children acquire language. Researchers at the University of Iowa found that pigeons are able to categorize and name dozens of objects, which means they engage in a type of associative learning that children also use to learn new words.

"Our main thesis is that associative learning may underlie the acquisition of complex behaviors, including human language," lead researcher Dr. Ed Wasserman told The Huffington Post. "If so, then our view of human language as altogether unique may need revision... What we learn from studying a model animal like a pigeon may not only point to important interspecies parallels, but also help us find ways for more effectively teaching children language, especially children with language disorders."

According to Wasserman, a psychologist who has been studying animal intelligence for decades, the findings also suggest that animals may be more intelligent than we often consider them to be, with learning mechanisms similar to those employed by humans.

In the experiment, three pigeons played a version of the "name game" in which they were shown 128 black-and-white images that fell into one of 16 different categories: baby, bottle, cake, car, cracker, dog, duck, fish, flower, hat, key, pen, phone, plan, shoe or tree. Then, they had to peck on either the correct symbol for that category or a randomly chosen one.

The pigeons were shown an image of a dog along with two icons, one representing the dog and one that was random (see below). If it chose the correct icon, the pigeon was rewarded with food pellets. The pigeons were then able to make the same association for 15 other categories. Over time, pigeons learned to associate a specific icon with one of 16 different categories. They also learned that different breeds of dogs were part of the same larger "dog" category. 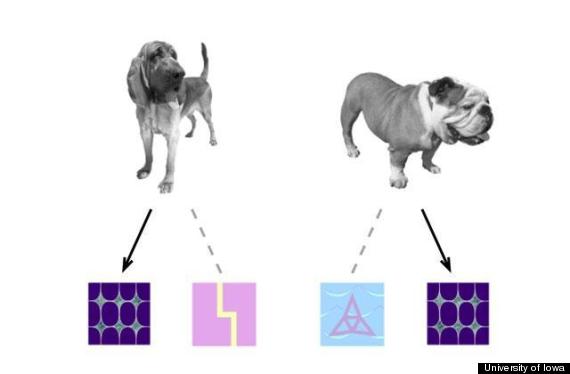 "We taught pigeons to associate specific visual stimuli (what we called pexigrams) with photos from a particular category," Wasserman explained. "We tried to model the many-to-many relations that hold when children learn words. Our success in this endeavor may require that we revise our views concerning the uniqueness of human language."

The research is the first on animals that captures some of the main aspects of associative learning -- mapping between stimuli and responses -- which children employ when learning words.

The way that pigeons engaged in mapping stimuli and responding to correct and incorrect answers suggests that the strategies children use to learn words may not be unique to humans. The findings may lead to a better understand of the associative principles children apply when learning new words.

But why study pigeons instead of just looking at children while they are acquiring language? The researchers selected pigeons in particular because they are more intelligent than many other birds, but they of course don't have the high-level reasoning abilities that humans do.

"We can and do study word learning in people, but they bring all sorts of high level reasoning abilities, problem solving strategies and background knowledge to the table," study co-author Bob McMurray told The Huffington Post. "It can be difficult to strip these things out to really focus on and isolate the mechanisms of learning. By using an animal model like a pigeon we can observe learning in its rawest form and figure out how it works. It helps to isolate this one small part of how humans learn language and figure out what it can do."

The findings were published online in the journal Cognition.