Recent remarks by a would-be Social Security cutter highlight the unspoken agenda behind proposals that claim to "fix" the program by cutting benefits, all in the name of "deficit reduction." Social Security doesn't contribute to the deficit. But it can help decrease it, provided you have no moral qualms about raiding a Trust Fund created for other purposes. It's increasingly clear that this is exactly what some people have in mind. And, as we've come to learn, no would-be raid on America's retirement savings is complete without a lecture on morality.

Funny, isn't it? People who think it's immoral to walk away from an underwater mortgage are encouraging the government to welsh on a loan from the American people. They keep preaching about "thrift" even as their fingers drive deeper into working America's piggy bank.

We keep hearing that Social Security is "broke," thanks to the well-funded efforts of folks like these. But the Trust Fund currently holds a $2.6 trillion surplus, and it's expected to rise to $4.2 trillion by 2025. That's a lot of money set aside for people's retirement -- money some people would rather see used for other purposes, like paying for the spending spree of the last ten years or underwriting tax breaks for the well-to-do.

How much money are we really talking about? 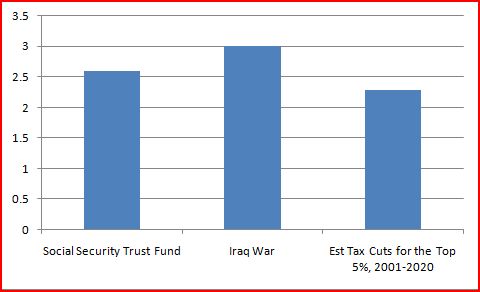 If they could get their hands on the Trust Fund's current surplus, it could cover most of the projected cost of the Iraq war([1]. Or it could pay the combined cost of the last ten years of tax cuts for top 5% earners[2], along the the next ten years' cuts[3] (since it now seems clear they will get extended under the new Congress.) Anybody with a spreadsheet and a detailed Federal budget can find ways to use this money - and believe me, somebody already has.

One of the greatest puzzles behind this well-coordinated attack on retirement benefits has always been: Why Social Security? It's forbidden by law from contributing to the overall deficit, it holds a huge surplus, and its future imbalances can easily be remedied for the next hundred years. Maya MacGuineas is a key player in this effort, and she's done the public a service by addressing a delicate matter that others prefer to ignore: They want that surplus.

Ms. MacGuineas' organization receives major funding from billionaire Pete Peterson, as do many of the other groups promoting the "cut Social Security" line. The Peterson/MacGuineas school, whose other prominent adherents include Alan Simpson and Alice Rivlin, insist that they want to "preserve" Social Security. Yet they persist in emphasizing benefit cuts, while refusing to acknowledge or rebut simple proposals to fix the problem by lifting the cap on payroll taxes.[4]

A graph from the Strengthen Social Security Campaign illustrates the impact of their various proposals on someone earning $43,084: 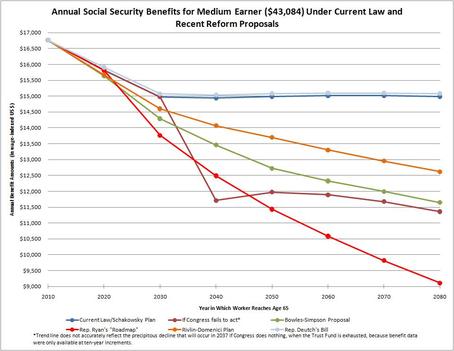 Their "solution" to a 25% shortfall that begins in 2037 is to begin cutting benefits even earlier,emphasizing benefit cuts for the elderly over tax increases on the well-to-do. Why wouldn't they merely lift the payroll tax from its current cap of $106,800? They never seem to say.

Their proposals are unjust even at first glance. The current cap helps the most prosperous 5%, while everybody else pays the tax on every dollar they earn. Their proposals typically raise the cap until it covers 90% of all income -- but that only gets us back to where we were in the 1980's. And once you consider that surplus, the picture becomes even clearer. Diverting the Trust Fund into the overall budget would retroactively make the payroll tax highly regressive. It would also break a moral commitment.

Yet that's exactly where Maya MacGuineas is going. As she told NPR: ""They (sic) are nothing like any trust fund that any one of us would think of. It conjures up an image of really holding savings, and it doesn't do that at all."

Why doesn't the Trust Fund "really hold savings"? Because, says Ms. Guineas,"the policy choices that we have to make good on Social Security obligations are exactly the same with the trust fund or if we'd never had the trust fund. Raise taxes, cut Social Security benefits, cut other government spending, or borrow the money. That's the only way to repay the money."

This argument suggests that Trust Fund money should be thrown into the general budget and made available for other purposes. But Ms. MacGuineas' own choice of words illustrate the moral failing of this approach. It's always been considered unethical not to "make good" on an "obligation" - at least until now. Regrettably, Ms. MacGuineas fails to explore the moral implications of her own words.

Her argument is obligingly repeated by the NPR bloggers who quoted her. They describe the surplus as a "mirage." A sense of déjà vu is warranted at this point, because we've heard it all before. This wordplay is an extension of George W. Bush's staged (and artifical) demonstration that the trust funds are just pieces of paper "sitting in a cabinet," and Alan Simpson's dismissal of the Treasury Department's debts to Social Security as just "IOU's." That "IOU" characterization is misleading. But even if we accept it for a moment, that still leaves the underlying question:

When did our nation stop believe in honoring "IOUs"?

The NPR bloggers write that "the government is lending the Social Security surplus to itself. And the obligation to repay those loans is the trust funds." But the government is not "lending money to itself." Outside the narrowest technical definition[5], it has received a loan, not issued one. And that loan hasn't come from "itself," ethically speaking, but from American workers and their employers. The money in that account - both the principal and the interest - is held in trust to ensure a secure retirement for American workers. Taking that money amounts to robbing tens of millions of Americans of hard-earned retirement funds. Sounds wrong, doesn't it?

That's where David Brooks comes in. Brooks recently said that liberalism has an "economic philosophy that excludes psychology, emotion and morality." In Brooks' inverted world, the benefit slashers are driven by tender-hearted feelings and the "economic surgeons" are the ones who don't cut.

That "emotion" comment is especially peculiar. Whenever reasoned critiques of a plan like Simpson/Bowles are offered, someone like Maya MacGuineas will make snarky remarks about the critics. Her latest? "Stop whining about Bowles-Simpson. Let's make it better!" If nothing else, Mr. Brooks, "whining" suggests emotion. Others in the cutters' camp accuse critics of "a deficit of respect" and "ad hominem attacks." (You mean like calling your opponents "emotionless," "amoral," and "whiners"?)

Another item on the Brooks checklist, "morality," is where things really get awkward for the would-be cutters, a group that includes Brooks himself. "Sorry, we've got to raise the retirement age," Brooks said about the deficit, adding elsewhere that people are "selfish" for wanting to use benefits they've earned in order to have some financial security in their retirement. Apparently for Brooks, some promises are made to be broken.

Funny thing. This is the same David Brooks who bemoaned the "responsibility deficit" that could be seen when "neighbors take on huge mortgages and then just walk away when they go underwater." It looks like some debts are less equal than others.

Brooks says we should "appreciate the old wisdom of common sense: simple regulations, low debt, high savings, hard work, few distortions." That's an admirable list (although it leaves out other common-sense virtues like "charity," "good works," and "helping your neighbor.") But why do we admire people who save? Usually it's because they're putting money aside for their old age. And while this list evokes a pastoral, Laura Ingalls Wilder worldview that may never have existed outside Brooks' imagination, it's missing one item most people would expect to see: "honoring your debts."

Let's leave aside for the moment the radical wealth distribution which these plans would preserve and extend. ("Stop whining about Marx-Engels! Let's make it better!") Here's an ethics question for David Brooks, Pete Peterson, Alan Simpson, and Maya MacGuineas: I don't doubt for a moment that you honor all your debts in your personal lives. I'm sure you pay your bills on time. I'm sure you would never consider welshing on an IOU just because you could get away with it.

So why do you want the government do it?

[1] As estimated by Joseph Stiglitz and Linda J. Bilmes (although their cost estimate is being revised upward by as much as 25 percent). No "deficit commission" has yet proposed ending our involvement in Iraq.
[2] The Bush tax cuts cost nearly $2.5 trillion from 2001 through 2010, according toCitizens for Tax Justice); CTJ also found that 52.5% of the benefit of those cuts went to the wealthiest 5% of Americans. This is a very rough projection of expected future costs which extrapolates from the estimated costs of extending the tax break for the top 2%.
[3] Estimated total cost of tax cuts for the wealthy for the next ten years: $830 billion. Linden and Ettlinger, Center for American Progress.
[4] Lifting the payroll tax cap would fix 95% of the long-term shortfall, and the remaining 5% could be addressed with any number of other revenue programs, such as an 0.5% financial transactional tax that would permit benefits to be increased.
[5] In economists' terms, all government expenditures are categorized together -- but then, so are other types of expenditure that are commonly understood to be distinct.