No one is actually reading the "most important book of the twenty-first century."

Thomas Piketty's "Capital in the Twenty-First Century," a 700-page economic tome on the dangers of rising income inequality, is the summer's most unread book, according to a totally non-scientific analysis conducted by a mathematics professor and published by the Wall Street Journal.

Professor Jordan Ellenberg looked at the five most popular book passages in a number of current best-sellers, according to data from Amazon Kindle readers. He determined the average page number readers highlighted and divided that by the total number of pages in the book. A high number, according to Ellenberg, means that readers are reading until the end. Donna Tartt's Pulitzer Prize-winning blockbuster, The Goldfinch, for example, earned a score of 98.5 percent on the index.

Piketty's book scored a dismal 2.4 percent. The latest of the five most popular highlights in Piketty's book is located on page 26, according to the Ellenberg. 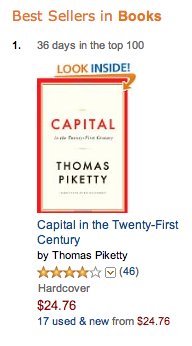 When "Capital" was first translated from French into English earlier this year, it shot up to number one on Amazon's best-seller list. The print book briefly sold out on the site.

"Piketty mania" went totally viral. Despite the book's fame, it was pretty clear all along that a lot of the people talking about the book hadn't read it.

The French economist is apparently OK with that.

“The problem with all the publicity is you have people who write about the book who apparently have not opened it,” Piketty said in June on Bloomberg TV’s “Countdown.” “That’s fine with me, the objective was to promote debate.”

That objective has clearly been achieved. In May, the Financial Times published a harsh rebuttal to Piketty's work, saying his data was manipulated and full of mistakes. In response, a bunch of the world's most renowned economists spent Memorial Day weekend churning out takedowns of the FT's takedown of Piketty.

If you, like the author of this post, haven't yet finished Piketty's tome, the short of it is that he analyzed centuries of economic data to illustrate how modern-day capitalism makes the rich richer much faster than wages grow for everybody else and if governments don't step in to intervene, the future looks pretty bleak. There are a bunch of good guides to the book online. You can also watch HuffPost's interview with the author here.