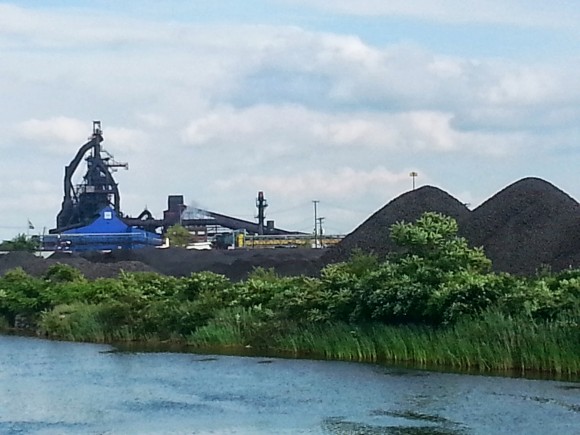 The city's devastating bankruptcy was all over the news on the day I arrived in Detroit last month. It was my first visit to this iconic American city, and I was bracing myself for a down-and-out kind of scene.

But what I saw was much harder to accept. It wasn't so much the abandoned houses, boarded up with plywood, hollowed out by fires, roofs caving in, yards going wild, on street after street after street. Or the potholed, half-flooded city streets that barely passed as paved. I had expected that.

Instead it was the gleaming, shiny maze of pipes, tanks, smokestacks, flares, fences, and walls of the Marathon Petroleum Company that weighed on my heart -- and lungs. The thriving industrial oil refinery, recently expanded to process Canadian tar sands, was so clearly profiting in this struggling city, so clearly profiting at the expense of the citizens of this struggling city. 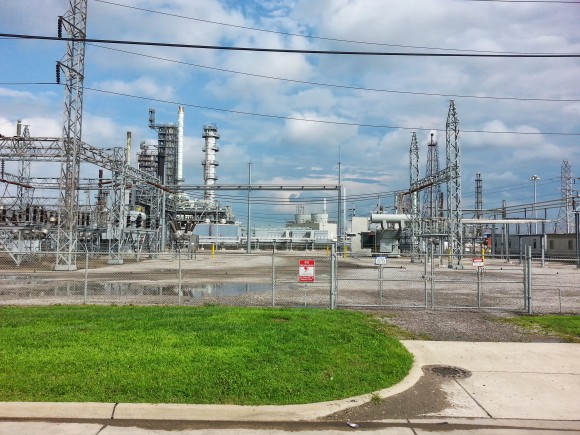 I visited the residential neighborhood nestled among the Marathon petroleum company, in ZIP code 48217. People live within yards of massive fuel tanks, pipes, flares, and even open petcoke piles. Marathon is processing so much Canadian tar sands that it can't sell the dirty byproduct, known as petcoke, fast enough. So Marathon is piling the stuff up in vast open piles near waterways, letting the toxic coal-like dust enter streams and soils.

I saw a massive pile sitting right next to the river, cattails grazing its lower flanks. A few dozen yards upstream I saw a large, grate-covered intake pipe labeled "City of Detroit." A couple of guys were fishing nearby. Do they eat the fish? If so, is the fish contaminated with petcoke pollution? Does that same pollution get siphoned into drinking water of the city?

Marathon's presence has also necessitated the expansion of the surrounding superhighway. Thus residents live with constant traffic noise and pollution. Standing on the softball field of the neighborhood recreation center, I could barely hear the words of the amazing cancer survivor and activist Theresa Landrum as she told me about her neighborhood. There were too many trucks going by, just a few dozen yards away.

According to Landrum, Marathon has bought out some residents -- after which it briskly razes the houses and posts stern No Trespassing signs -- but for many in 48217, the buyout package is either not fair enough or just plain not enough. So some stay.

The odor of Marathon's operations, combined with the traffic pollution, is strong. From the softball field I could smell it, and I felt nauseated and headachy. I tried to comprehend the indignity of having to raise my children in that context.

In other parts of Detroit, I saw community gardens, visited a new eco-friendly aquaculture business, and explored a green renovation of one of the grand old houses. But what stays with me is the bitter smell of Marathon refinery, and the playgrounds and ball fields I saw within sight of their polluting facility. These kid spaces happened to be empty on that day. I don't know what would have been more depressing: the empty playgrounds that I witnessed, or those same playgrounds full of children breathing polluted air.

48217 is a mistreated community. It is also ensnared in the extraction, transportation, and processing of Canadian tar sands. It is both a stark reminder of the extent of environmental injustice in our country, and a warning about a future of tar sands production.

The Keystone XL Pipeline project would connect the tar sands of Alberta, Canada, with Gulf Coast refineries via a 1,700-mile, $7 billion pipeline running through America's heartland. The pipeline has been stalled for three years while it waits for approval from Obama's State Department for the portion that crosses the U.S.-Canada border. Construction of the southern portion of the project, which runs to refineries along the Gulf coast, does not cross an international border and therefore does not need State Department approval. It is in process and almost complete.

Public comment on the State Department's latest Environmental Impact Statement evaluating the impacts of the project closed in April. Obama's decision on whether to approve the international portion is expected later this year.

Moms Clean Air Force opposes the construction of this pipeline. Here's why.

Refineries along the Gulf Coast already pollute the air of nearby minority and disadvantaged communities. Adding to this air pollution burden by bringing more tar sands in for refining and export is unfair and wrong. Every child deserves to breathe clean air.

Pipeline spills threaten communities all along the pipeline, which will run through America's heartland. Spills and leaks are already happening along the pipelines currently bringing Canadian tar sands to parts of the U.S. Residents of Mayflower, Arkansas; Marshall, Michigan; and other communities understand the devastating impact of spills, including air pollution and water contamination. There are also safety concerns specifically related to the company that will build and profit from the pipeline, TransCanada Corp. We should protect the right of our nation's families to breathe clean air.

The Keystone Pipeline, which will speed the development of the carbon-intensive Alberta tar sands, keeps us firmly on a path toward unprecedented human-induced climate change. And it's not just Canadian oil development we are concerned about. The project is also intended to handle American crude oil, rolling out the welcome mat for more aggressive crude oil production in Montana and North Dakota. We should protect the climate, for our children's future.

We oppose the pipeline because it would deepen our dependence on a form of oil that produces more greenhouse gas emissions than conventional oil. Alberta tar sands should not be mined, transported, processed, or shipped. It is a particularly dirty form of energy. See above.

The Keystone Pipeline is not going to ease our dependence on imported oil. The controversial practice of hydraulic fracturing is already doing that. The Pipeline's main function would be to open overseas markets to the tar sands coming out of land-locked Alberta. Canadian pipelines bringing tar sands to the Canadian coast face stiff opposition, and are unlikely to be built. Why should the US risk air and water pollution at home to line the pockets of TransCanada's corporate officers? What America needs is investment in alternative, renewable, clean energy.