Pausanias, a Greek living in the second century C.E. under Roman rule, wrote his Description of Greece (Περιήγησις Ἑλλάδος) by visiting the cities and sanctuaries of the Greek mainland. Today, an increasingly small number of tourists still pick up Pausanias as a guide, since his text is full of countless descriptions of Greek monuments now part of vast archaeological sites or lost to time. Pausanias, exploring his own culture and past, has often been characterized as a sort of pilgrim. While we often understand pilgrimage as a journey to something uniquely sacred, Pausanias subverts this idea. This Greek geographer was certainly interested in the so-called sacred, but the connections that Pausanias the pilgrim makes between the various locales he visits show how someone can be fascinated by the entirely ordinary or familiar.

In his travels through all things Greek, Pausanias is more often than not concerned with antiquities and prefers the old to the new. But what Pausanias sees, he tends to see everywhere. In most every city, he describes shrines, temples, and a large variety of other buildings. His landscape is flooded with statues, inscriptions, tombs, altars, and sanctuaries. Pausanias uses all these elements to bind Greeks to a common culture.

For example, early in his travels, Pausanias visits Athens, focusing on a small quarter of the city. He describes older structures like the Parthenon alongside newer ones like the library built in the name of the Roman emperor Hadrian. And here in Athens he notes that the whole city is sacred to the goddess Athena. "Both the city and the entirety of the land are in the same manner sacred to Athena; for even those who in their demes (districts) have established worship for other gods nevertheless hold Athena in honor." What defines the community of Athens, and as he shows for every other city, is its common religious activity. 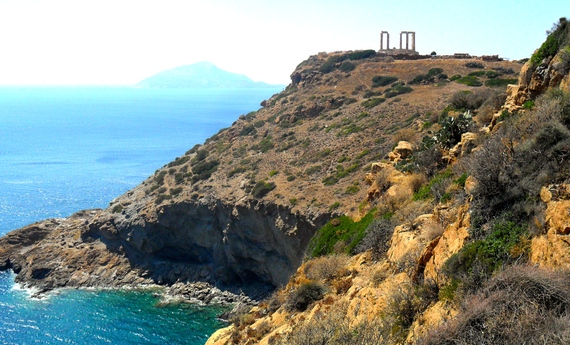 But not every city is alike; Pausanias' cities are not cookie cutter versions of one another. Instead, Pausanias draws direct connections between what he observes in different places. For instance, he notes that an image of the god Asclepius at Epidaurus happens to be half the size of Olympian Zeus in Athens. Or describing the magnificent sanctuary of Zeus at Olympia, Pausanias observes familiar ashen remains making an altar, since it "has been made from the ash of the thighs of the victims sacrificed to Zeus, just like the altar at Pergamus. There is also an altar of ash of Samian Hera not at all more marvelous than what in Attica the Athenians call 'improvised hearths.'" Aside from this altar of Zeus reminding Pausanias of one in distant Pergamus, another altar - in this case for Hera - is like the Athenian practice of sacrificial hearths for chthonic gods and heroes. While this last comment may be slightly obscure for Pausanias' ancient and modern readers, connections like this make up much of Pausanias' descriptions. These sorts of elements, therefore, while marvelous are not unique. They remind Pausanias that common parts of Greek culture can be found anywhere.

As the scholar Jaś Elsner has shown, Pausanias combines the secular and sacred to craft his world. Elsner emphasizes Pausanias' treatment of those sacred images and objects to which only the initiated Greek had access. But the treatment of the worldly and secular in Pausanias' pilgrimage is just as important. Like with Christian ideas of pilgrimage, Pausanias tends to encounter the so-called sacred, yet records it for a different purpose. Because Pausanias expresses awe at most everything he encounters, he shows that Greek culture is composed of objects and buildings that were not unique, but rather common.

We don't live in Pausanias' world; the one he creates in his text differs very much from our own. It is difficult in particular to treat Greek religion as comparable to modern religious communities. Yet we should not discount Pausanias' own fascination with what he observes. This pilgrim dictates what binds all his fellow Greeks together by making connections between cities and communities. And in this way Pausanias constructs a Greek identity that hinges on what he finds consistent in his travels. Giving reverence to what he sees as ordinary to such an extent that these objects nearly transcend this category, Pausanias shows that someone can - and often should - be filled with awe even in familiar spaces.