This Thursday many Americans will say grace before enjoying a traditional Thanksgiving meal, thanking their Creator for the blessings of food, family and friends. Perhaps, too, they will be vaguely grateful for the first Thanksgiving meal shared in 1621 between the Plymouth Colony pilgrims and the Wampanoag tribe.

But I wonder how many of us will notice the disconnect between the boldness and courage of the Wampanoag who aided the desperate pilgrims as they landed on America's shores and the 26 governors who recently vowed to turn away all Syrian refugees who seek passage to America today. 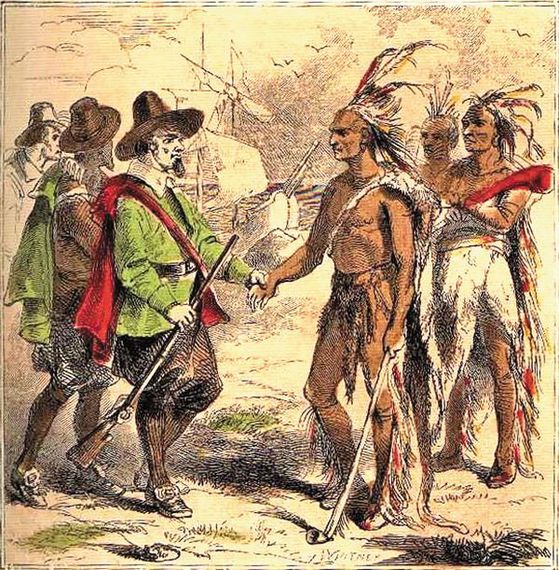 Like Syrian refugees today, many of the pilgrims left everything behind to escape religious persecution. I can imagine the Wampanoag debating their response to the starving pilgrim refugees -- whether to aid, resist or even fight them. The pilgrims posed a potential threat to the Wampanoag if allowed to establish themselves here. Some doubtlessly argued that, while the majority of the pilgrims might be good-natured, peaceful people, not all of them would be. And the pilgrims carried weapons with them, the likes of which the Wampanoag had never seen before: canons, matchlock muskets, and the iconic blunderbuss. How could they be sure these weapons would not eventually be directed against them?

We know in hindsight that whatever safety concerns the Wampanoag may have harbored were well-founded. Were the Wampanoag naïve? Were they so moved by the pilgrims' heart-wrenching need that they did not adequately consider the possible drawbacks to their generosity?

The Wampanoag were probably a lot wiser and spiritually connected than some imagine. We are the naïve ones.

In his Sermon on the Mount, Jesus teaches, "Do not resist an evildoer. But if anyone strikes you on the right cheek, turn the other also." (Matt 5:39) Jesus' teaching seems overly naïve to most of us. Yet Jesus knew more about the nature of evil than most. Jesus knew that while evil may seek to destroy us, evil's most effective strategy -- the one few of us anticipate -- is to tempt us to unwittingly destroy ourselves. We construct the guillotine, we place our heads in it, and we pull the rope.

Evil wins when we become terrified. We fall right into its trap when we become so afraid of evil that we commit evil acts to protect ourselves from it. Temporarily, we may ensure our physical survival by barring the door to tens of thousands of peaceful, desperate Syrian refugees, but in so doing, we renounce the very things that make us human: qualities like empathy, compassion, and generosity. By refusing to grant the refugees safe harbor, we ensure not only that they suffer but that we do too. We suffer by sacrificing our country's proud history, along with our very humanity, at the altar of fear. Evil wins!

When the Wampanoag considered the many possible threats posed by the pilgrims, my guess is that they weren't being naïve, but simply chose to accept physical threats over spiritual ones. They chose to protect the life of the soul over the life of the body. While the relationship between Native Americans and Europeans would become increasingly complicated and tragic over time, the Wampanoag chose empathy over indifference, compassion over cruelty, and generosity over hard-heartedness. They overcame evil with good, darkness with light.

As we sit down to our Thanksgiving meal this Thursday, won't you offer a word of thanks for the perseverance of the pilgrims fleeing persecution and for the breathtaking courage and wisdom of the Wampanoag who welcomed them?

Let us pray that we in our day might dare to live by the example they provided in theirs.