Cara McKenna is an award-winning romance and erotica writer who also publishes under the name Meg Maguire. Her stories are as smart as they are sexy, full of emotional depth and complex characters. Her latest book, Badger, defies the conventions of genre writing and rises to be a stunning and unique creation in a league of its own.

MW: So, I read the glowing review Totally Booked posted about Badger and I was immediately intrigued. It's a unique book in many ways, starting with the cover.
What made you decide to use a cover reminiscent of a graphic novel instead of the standard fare? 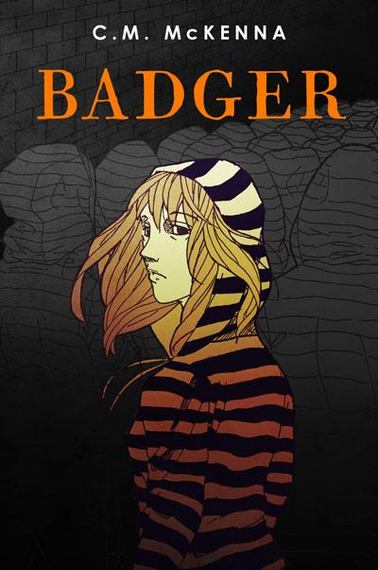 CM: That was my publisher's vision. It's a genre-bending book and I think they wanted an accordingly bendy cover to let people know, hey, this story isn't easily shelved. Especially as my existing readership knows me from my erotica and romances (as Cara McKenna and Meg Maguire, respectively) and Badger, while a love story of sorts and not short on explicit sex, isn't really either of those things. And the graphic novel look makes sense if you've read the story; anti-heroism is a major theme.

MW: At the end of the novel, it states that Badger was written in 2011. What made you wait so long before publishing it?

CM: Because no one would buy it! I couldn't find a home for it myself, and when I landed my agent in 2012 I handed it to her and said, "I think this is the best thing I've ever written, but I have no idea if anyone would ever publish it." For an entire year, she queried every editor she knew with off-kilter tastes, and we got dozens of really kind rejections, all to the tune of, "I loved this! But there's no way I can sell the publisher on it." Basically it's too weird a shape; there's no existing box it fits into tidily. It's a marketing department's nightmare.

I was considering self-publishing after all that, though I really didn't want to--I like traditional publishing. Self-publishing is a LOT of work, if you're going to do it well. I want other people--people who know what they're doing--handling the proofing and typesetting and marketing and distribution and all the rest, while I write. But I really loved that book and just wanted it out there, already, so I was considering going that route. Then two good author friends of mine decided to start Brain Mill Press, and I approached them. It was the right way to go. They shared my wonky vision and didn't try to sand away any of Badger's uglier thorns, poured a ton of attention and energy and love into the entire process, more than a traditional publisher would have been able to. From its conception, it took four years for that book to meet the world, but in hindsight I'm happy it worked out the way it did.

MW: You use a lot of different pen names. Cara McKenna for erotica, Meg Maguire for romance, but you used C. M. McKenna for Badger. Was that because you felt the novel didn't fit into either of those genres?

CM: Yes and no. I was planning to put it out under Cara's name, but my editor at my primary publisher, Penguin Random House, requested that I consider tweaking my pen name for the project (which they had politely rejected.) I'm building a certain brand with the books I write for them, to abuse an already battered buzz word, and they wanted to keep Badger separate from my growing list with them.

MW: What genre would you categorize Badger as if you had to?

CM: I wish I knew! Sometimes I think women's fiction, but that's not quite right. Other times I think maybe new adult, but the characters are too old by a few years. So I usually tell people it's literary or general fiction, with really fucked up sex scenes. Brain Mill Press labeled it "neo-noir," which isn't a subgenre I'd been acquainted with before.

MW: Did you have any muses in mind when you created Badger, Adrian and Ray? If you had to cast them with actors, who would you use?

CM: No, neither Adrian or Badger had muses, which is unusual for me. I have a very clear image in my head of what Badger looks like, but it's not a face I recognize. I might leave the casting up to a professional, because I'm kinda stumped on those two! Maybe Krysten Ritter, but with mono? She could play Adrian if she made an effort to be less beautiful. Ray, the sub shop punk, is another matter! He's very much based on an old lover who I still recall fondly, and for a screen adaptation we'd need a time machine to go back and fetch a thirty-year-old Al Pacino to play him.

MW: Do you plan on revisiting these characters or this style in the future?

CM: Characters, no. Style, sort of. Badger was the most intense and enjoyable writing experience I've yet had, so I'd love to write more in that sort of voice. I have an idea for a women's fiction series that lands somewhere between Badger and After Hours in tone (After Hours is an erotic romance I published with Penguin in 2013 as Cara McKenna--stark and fairly kinky, against a scrappy, working-class backdrop). I'd love to write something as raw and voice-y as that and Badger again, with a highly flawed female protagonist (Adrian, the anti-heroine of Badger, is a recovering pill addict; I'd like to write a heroine who's living with mental illness, in a future project.) I suspect that's the type of story I most excel at, especially now that Badger's been out for a few months and has been so well received, and I know that readers are willing to go there with me.

MW: You began writing and publishing romance and erotica before the advent of the Fifty Shades explosion. How has erotica moving more into the mainstream affected your work?

CM: Fifty was great for me! In its wake I was courted by Penguin, who were scouring the romanceosphere for established erotica authors to bring into their stable, which then led to me landing my agent. My backlist of erotica titles enjoyed a nice sales boost as well. Fifty didn't make me an overnight sensation, though. My stories featuring pushy alpha heroes have benefited in particular, but I also write less mainstream stuff, with atypical protagonists and kinks that aren't exactly trendy. For example, I have stories I refer to as "the alcoholic hermit rope fetishist" (Unbound) and "the cuckolding book" (Crosstown Crush) and "the agoraphobic Parisian male prostitute" (Curio). I can only write stories that excite me, which often means unusual and off-trend ones, and I'm very lucky to have a publisher who's been willing to go those places with me. 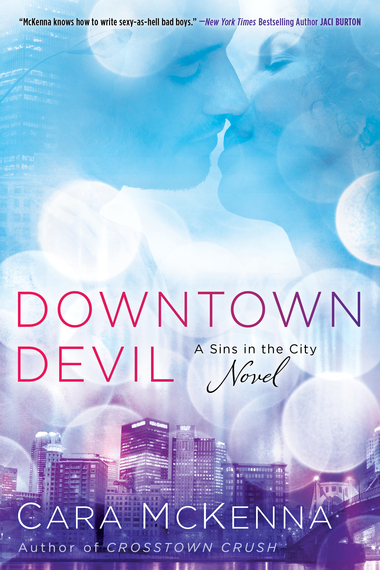 MW: In many of your books you tackle a lot of sexual taboos and kinks that are slightly more obscure or unusual than standard erotica. What does your research process look like?

MW: What do you have coming down the pike?

CM: Not as much as usual! I have a new baby, and he's slowed my typical frenetic pace appreciably. My next release is Downtown Devil, out in June (as Cara McKenna). That's the second book in the Sins in the City series--not a sequential series, merely three books tied together by the their theme, which is ménage à trois (two dudes, one lady.) I'm working on the third installment now. I also want to write the finale of the Desert Dogs books, my romantic suspense series full of murder and motorcycles and badassery in the Nevada badlands (also as Cara). After that, I'm going to focus on that women's fiction project I mentioned.

It's been ages since I finished an entire book before pitching it to publishers--I've been writing on spec for the past few years--but I think that's what I'd like to do with that project. Write a book purely for myself, the way I did with Badger, and worry about finding the right home for it later. I write my weirdest and, I think, strongest books when I have nothing to lose, no pressure and no expectations. I miss that. It used to make me feel like a legitimate, big-girl writer to utter such hard-won phrases as, "I'm on deadline," or, "I'm under contract," but now that I've got a tiny human to keep alive, nothing sounds half as alluring to me as freedom. My writing time is so limited, I want to make sure I'm pouring my precious little energy into stories that really infatuate and haunt me, even at the expense of marketability. 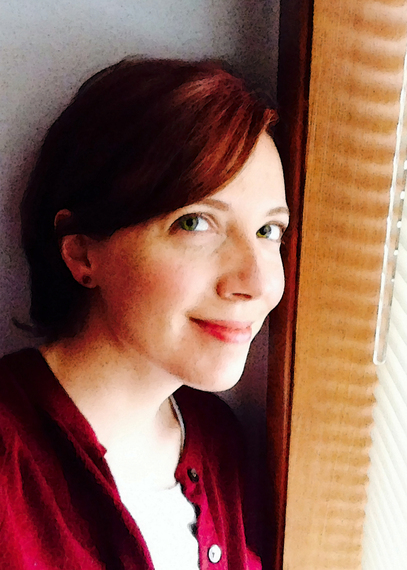 MW: Worst meal you ever had?

CM: The worst meal I ever had was actually pretty delicious. I ordered Murgh Korma at an Indian restaurant in Prague in 2014, enjoyed it immensely, then wound up with terrible food poisoning. I very, very nearly shit my pants in an ancient synagogue the next morning.

CM: I'm quite good at Scrabble! Though not as good as my friend Charlotte Stein, whose dirty, funny, heartbreaking books you ought to check out, if you enjoyed Badger.

CM: None of mine are secrets! I have no poker face for that kind of thing. I was watching Ant Man with my husband last month and when Paul Rudd took his shirt off I yelped, "Oh, Jesus!" and that about sums up how subtle I am. I think the actor I'm most sweaty for at the moment would be Michiel Huisman. He's a fucking fox and a half.

CM: If you'd asked me a year and a half ago I'd have said attics--I've lived in a surprising number of converted attics. But since I moved from Boston to Oregon, I miss basements. There's very few basements out west, only spider-filled crawl spaces.

MW: What would you be doing if you weren't writing?

CM: Like, for money? Graphic design. That was my straight job, and what I went to school for. But if you mean, what would I be doing this afternoon if I didn't need to write...? Probably sleeping. I miss sleeping. However, if I was well rested, my work was done, and the baby was with his dad for the rest of the day, I'd probably drink a bottle of Prosecco over the course of an evening and binge on cheese and an old season of Top Model and tweet and tweet and tweet about it. I would squander my time like no time has even been squandered before.

You can find out more about Cara and her books at http://caramckenna.com/index.html
For more reading recommendations from Totally Booked, go to http://totallybookedblog.com