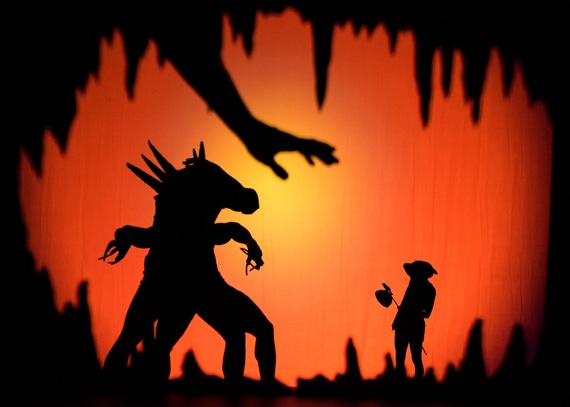 We all have something to hide.

Usually, we bury it deep inside the caverns of ourselves, where no one can find it. It's a secret, a wild whisper so engrained that we can't dismiss it.

It's our shadow. And it follows us everywhere.

Pilobolus' 2009 show Shadowland made its U.S. debut at the NYU Skirball Center this holiday season. Shadowland is like reading a fable -- a good one -- when you desperately want to know what comes next and your heart is pumping at 100 miles an hour even though you can practically spell out the ending. It's like the Little Mermaid, Sleeping Beauty, and Alice in Wonderland, with some of the darkness and grit of the pre-Brothers Grimm versions. The plot -- a bildungsroman set in the fantasy of a foreign universe -- centers around a teenage girl and her demons, the shadows she hides inside. Bodies intermingle behind a screen as surrealist shapes form crabs, and cars, and monsters, and men. Even the protagonist has a metamorphosis as she transforms into a half-human, half-dog, her ears flapping backwards in lonely sadness. 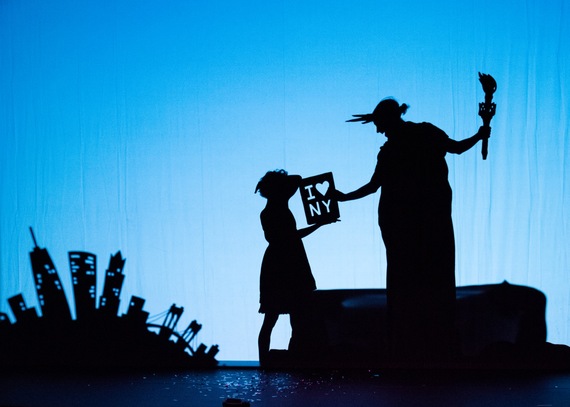 Pilobolus is known for its illusions. Though Dartmouth alumni founded the dance company in 1971, it broke out into mainstream culture in 2007 with a Hyundai commercial and a cameo at the Academy Awards Ceremony. Now, collaborators Steven Banks, Robby Barnett, Renee Jaworski, Matt Kent, Itamar Kubovy, and Michael Tracy have created an evening-length work of shape-shifting behind a scrim, so that what you see is part dance, part film-like narrative, part pop-out fairytale. Of course, the screen itself is not a permanent fixture; at moments, you're at a circus with "freaks" on parade, their eyes in the line of visibility. Another instance finds the heroine in a trio, where two men represent a centaur, her lover. Still, the majority of the production takes place in this Shadowland that is separate but immediate to the viewer. David Poe's score adds mystery and majesty to the landscape, like a tinkling jewelry box that strums just barely offbeat.

There was something voyeuristic about Shadowland, like you were watching a girl's nightmares materialize. You had a safe distance from them, but she didn't, and for that you felt sorry. But really you weren't so sorry, because it was beautiful to see her come of age and begin to accept herself without shying from the uglier parts of her imagination. 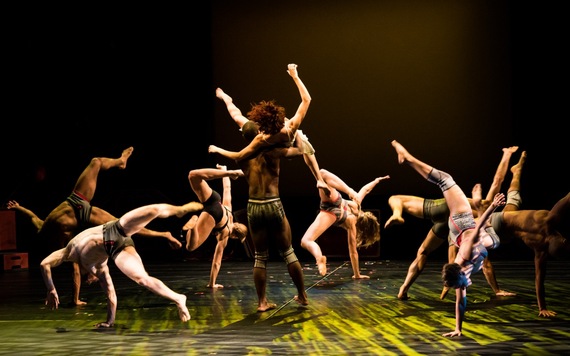 The trio was an especially striking scene, as it represented love and carnal and spiritual pleasure. Women ran like nymphs across the stage, lifting the girl (portrayed by Heather Jeane Favretto) out of her clothing, artificial bonds that isolated her from nature. Then, everyone was topless, but the mood didn't seem sensual or even sexy. Instead, it was magical and exploratory, like you were discovering a whole new world along with this young woman and her centaur-friend. Like you and they were learning what it meant to relate.

Shadowland's only fault was its predictability. It grew tiresome after you realized you knew where your protagonist would end up because the story followed so many canonical examples. Once again, this was all just play. Like most narratives that challenge "reality," it was a dream, innocent and benign. The teen would awake, and she would hug her parents, and she would live happily ever after in puberty. But why is it that we demand our fairytales finish in happily ever after when another conclusion could mean so much more? 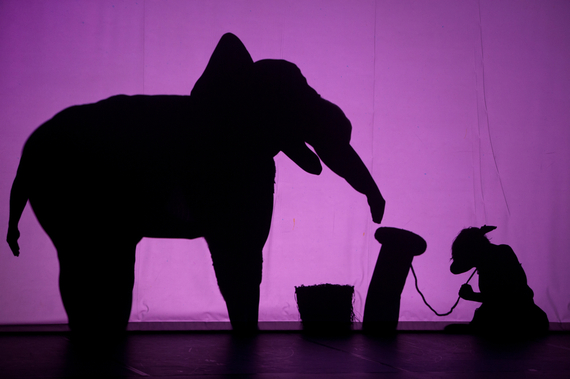 Still, the show has a message beyond clichés and entertainment. Those demons we hide inside our shadows, the ones we hope no one else sees -- maybe they're not so bad after all. We just have to accept them and learn how they can be used for good. They may taste bitter upon first try, but they're not poison. They're part of us, lurking in shame and stigma, and it's time to set them free.