The men and women of Pilobolus have no interest in playing by the dance world's rules.

In fact, it's nearly impossible to define the contemporary company, founded by a group of Dartmouth College students with no formal training in 1971. The current iteration of Pilobolus -- described by The New York Times as "athlete-illusionists" -- blends ballet, circus, shadow theater and storytelling in sensory-exploding performances across the globe.

One such show is "Shadowland," a stunning theatrical project that tantalized the Internet in 2013. A video of the performance has been shared nearly 800,000 times on Facebook, showing the dancers contort their bodies into wild configurations that, when enacted behind a lit screen, produce shadows that resemble elephants, wild plants -- even the Empire State Building.

I was just sent this Video, WATCH IT, you will never see anything like it, UTTER BRILLIANT, from Germany ? its breathtaking. TRUST ME.... "This performance is from Shadowland by PILOBOLUS. See more and like them Pilobolus Dance Theater"

The company has toured the show throughout Europe and Asia, and this week, "Shadowland" premiered to North American audiences at New York University's Skirball Center for the Performing Arts. Led by executive producer Itamar Kubovy, the work lands somewhere between the clever movements of Mummenschanz and the narrative of ballets like "The Nutcracker" and "Alice's Adventures in Wonderland."

Punctuated by the athletic prowess of the lead, Heather Jeane Favretto, and her fellow dancers, the 75-minute event is certainly heavy on the visual spectacle. The younger members of the audience might find it difficult to latch on to the meandering storyline, which mimics a child's dream -- or, maybe, an adult's acid trip. Regardless of age, though, it's hard not to marvel at the collaborative discipline behind the mixed choreography.

Above is a video captured by The Huffington Post's videographer, Jon Strauss, which gives viewers a taste of what Pilobolus can do in front of and behind the screen. Watch as Favretto -- in a pivotal scene from the show -- transforms her body into a headless creature and a hybrid "dog girl" with ease.

Pilobolus will be performing "Shadowland" at NYU's Skirball Center through Dec. 6. 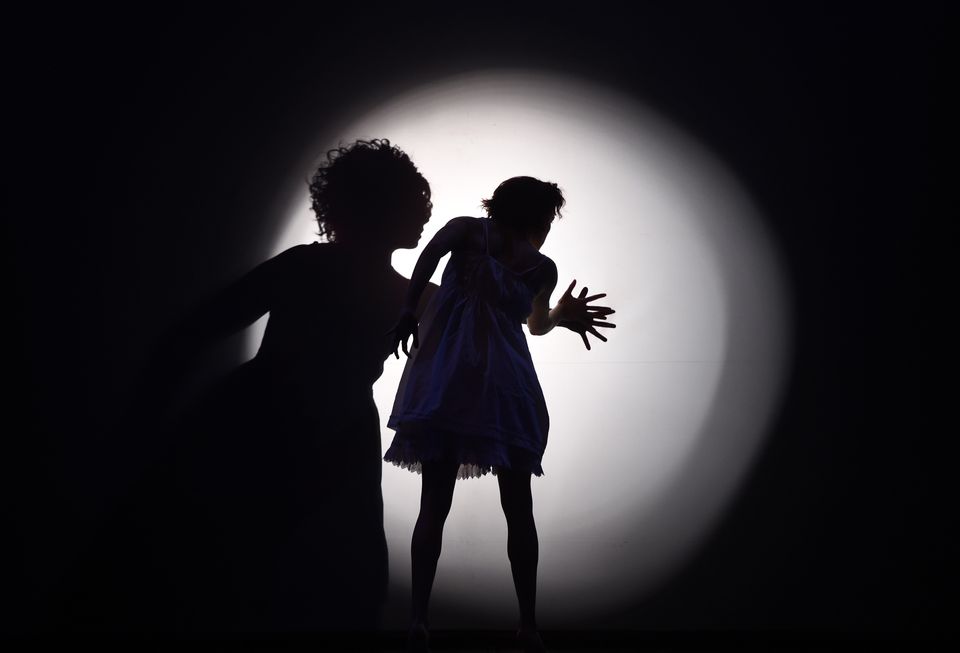 1 / 14
Dancers with Pilobolus perform a scene during a dress rehearsal for the American premiere of Pilobolus' "Shadowland" at NYU Skirball Center for the Performing Arts November 20, 2015.
TIMOTHY A. CLARY via Getty Images