An apparently bored pilot livened up the skies of central Florida on Thursday, using a private aircraft to trace the outline of not one, but two large penises in the airspace between Orlando and Tampa. The cockpit antics were not visible to casual observers on the ground, as no skywriting occurred, but someone at FlightRadar24 took notice of the phallic flight path and decided to alert the Internet: 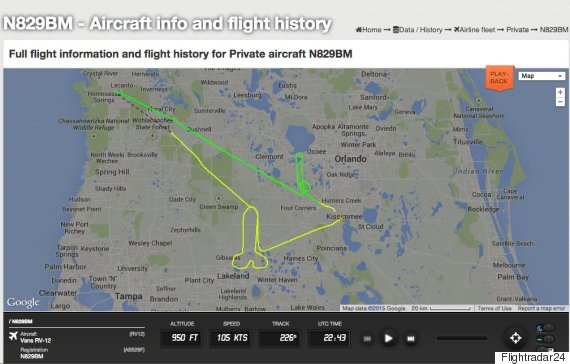 Judging by the Google Map data on FlightRadar24, the southernmost phallus is about 20 miles long. News 96.5 notes the northernmost, more misshapen "diversion" came awfully close to the restricted airspace above Walt Disney World.

Experts at AirLive.net confirmed the navigational hijinks were real to HuffPost UK.

Surprisingly, this isn't the most high-flying penis we've seen. Last year, sophomoric space observers noticed NASA's Mars rover Curiosity had (unintentionally) scrawled out a phallus on the surface of the red planet:

Wackiest Travel Accessories You Can Buy