LOS ANGELES (AP) — For some dogs, a chance at the good life takes off when the pilots do.

Thousands of pooches facing euthanasia — some just hours from death — get loaded on planes each year and flown to new homes in places with shortages of adoptable pets. Groups such as California-based Wings of Rescue or South Carolina-based Pilots N Paws lead the charge, recruiting pilots to volunteer their planes, fuel and time in a trend that's growing as more dogs end up in shelters and more people seek out canine love. 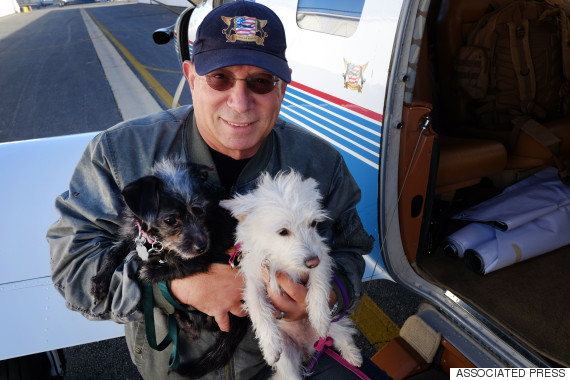 Yahuda Netanel, a private pilot with Wings of Rescue, carries two rescue dogs prior to a flight.

More than 4 million U.S. pets are euthanized every year. Both pilot groups encourage spaying and neutering as a solution but know that airlifts will increase every year as they become more visible and the number of needy dogs grows.

States such as California, Georgia and South Carolina typically have too many dogs in shelters, while places such as Washington, Oregon, New York, New Jersey and Florida need more pets to satisfy demand. To solve the location conundrum, pilots fire up their engines. 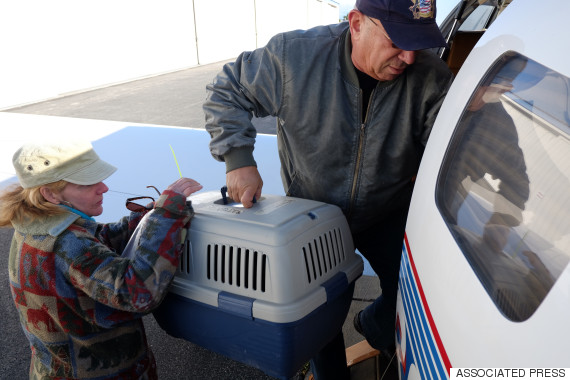 Netanel, with the help of a volunteer, loads a rescue dog onto plane prior to a flight.

In Coeur d'Alene, Idaho, retirees want smaller dogs, which are easier to take care of but a tough find in the area with the high demand.

So, the Kootenai Humane Society orders a planeload of dogs under 16 pounds every month, or more than 1,000 animals in the last 16 months, Executive Director Debbie Jeffrey said.

"It's just been a real success. As fast as they come in, they are adopted," she said.

The successes increase as more pilots sign up to help.

"We have seen the number of animals rescued go up every year since we started in 2008," said Kate Quinn, executive director of Pilots N Paws.

The group's 5,000-plus pilots have flown more than 15,000 dogs to new homes each of the past two years, relocating more than 75,000 animals over the last seven years, she said. And the numbers keep rising.

"Pilots love a reason to fly. They love making these flights," Quinn said, adding that all dogs have to be spayed or neutered, microchipped and vaccinated before they take off.

Yehuda Netanel, founder and president of Wings of Rescue, says business has doubled each of the past 4½ years. He started as the lone pilot who rescued 300 dogs, and now the group expects to fly 7,000 pets in 2015, he said.

The pilot of 27 years will charter planes to move dogs if there aren't enough private planes, meaning flights cost about $80 per dog.

Netanel and his 28 pilots are preparing to take flight this weekend with 250 dogs from San Bernardino, 150 from Bakersfield and smaller numbers from other locations.

Pilots Kale and Anj Garcia of Seattle will be in San Bernardino to bring as many as 50 dogs back to Washington state in their seven-passenger Cessna 414. The couple have flown 16 missions for Wings of Rescue.

Most dogs sleep during the flight, and only a few have had air sickness, said Anj Garcia, who will take each one out of its crate and cuddle it during the journey.

The flights allowed Cathy Parker of Coeur d'Alene to find her dogs: Bella, a poodle-Chihuahua mix, and Sidney, a poodle-Pomeranian mix, who Wings of Rescue delivered from different shelters about nine months apart.

"They've been a real good match for each other and me," she said.