The main force driving income inequality in America is the skyrocketing pay of not the 1 percent, but the 0.1 percent and the 0.01 percent. We just got a prime example of that.

Massive pay for the financial elite has become so routine that individual salaries are rarely shocking any more. These were big enough to cut through the torpor. Gross and El-Erian alone made 17 percent of all the pay given to Pimco employees in 2013, according to Ritholtz's report, which was based on leaked internal documents. The top six employees at Pimco took home a quarter of the pay given to 2,462 employees.

Bill Gross has publicly decried rising income inequality, and yet even by financial-industry standards, pay at Pimco is very unequal. In fact, by our estimates, if the firm were its own country, it would be by far the most income-unequal country in the world. And on a smaller scale, if Pimco were a county, it would be the most unequal county in America. These are conservative estimates -- tweak them at all, and Pimco would look more unequal.

This is evidence of what researchers like Emmanuel Saez have been saying about income inequality: Even the merely wealthy are losing ground to the new income elite. That income elite is, like the top earners at Pimco, by and large a financial industry elite.

Pimco claimed that Ritholtz's report was wrong, but didn't offer any numbers of its own. The firm doesn't disclose its pay, so it's hard to know for sure exactly how unequal that pay really is. But it is possible to do a rough calculation of its pay distribution, based on what we think we know about pay at the very top and how much money is divided among the rest of the staff.

There's a full explanation of how I arrived at Pimco's income distribution at the bottom of the post. Suffice to say, for now, that this distribution is fairly typical of financial firms like Pimco, according to Raghavendra Rau, a finance professor at Cambridge University who studies executive pay.

Huge payouts at the top, combined with relatively flat pay at lower levels, give employees an "incredible incentive to get into the top" of the pay scale, Rau said in an interview with HuffPost. Such a pay scheme also gives employees at the top a "huge incentive to stay at the top. It’s a matter of getting these guys to work really hard."

With everyone working incredibly hard to move up or maintain their place at the top, Rau said, “it becomes a treadmill... everyone is working their butts off to stay in the same place.”

According to my calculations, and using the most conservative assumptions possible about Pimco's pay, the company's "Gini coefficient" -- a way of measuring and comparing inequality, where 1 represents complete inequality and 0 complete equality -- is an exorbitantly high 0.769. By way of comparison, one of the world's least-equal economies, South Africa, has a Gini coefficient of 0.631, according to the World Bank. The Gini coefficient for the U.S., based on the latest U.S. Census American Community Survey, is 0.476. New York County -- a.k.a. Manhattan -- is tied for the highest county-level Gini in the U.S. at just over 0.6.

Here’s the chart that helps put this in perspective. It’s called a Lorenz curve. It shows what percentage of a population gobbles up what percentage of total income. In a world of perfect equality, it would show a straight line from the lower left-hand corner to the upper right-hand corner. In the real world, where inequality exists, it bows down and to the right and then spikes up at the end, representing how earners at the very top take up much of the income. The chart below compares perfect equality to inequality in the U.S. and at Pimco: 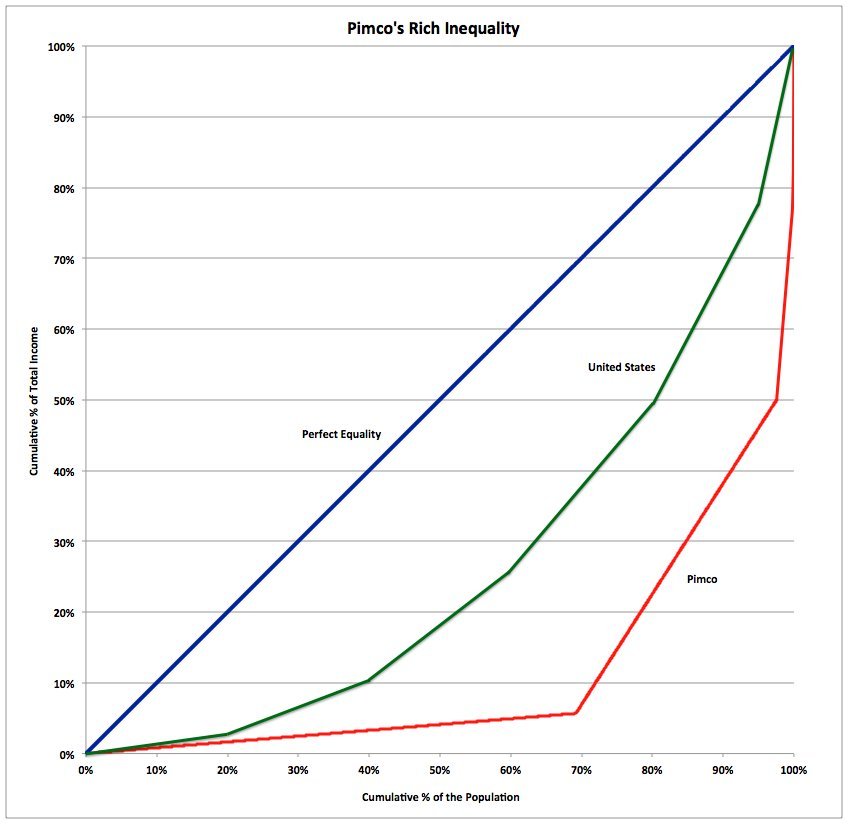 As you can see, the pay distribution is seriously warped at Pimco. 70 percent of Pimco employees make just 5.7 percent of the total income, while 0.3 percent of the employees – six people – take home a quarter of all the pay.

Because the Lorenz curve might be kind of confusing for the uninitiated, here’s the same data in pie charts:

(The percentages correspond to the portion of the population; the size of the slices shows how much income they receive)

A hedge-fund executive once said of Goldman Sachs: “The amazing thing about Goldman... is not that a few talented people make $20 million -- it’s all the mediocre talents that make over $1 million.”

The amazing thing about Pimco is that some talented people make $20 million, while once-extraordinary talents that have recently had mediocre results can make $290 million.

*Some explanation and caveats about the distribution of income at Pimco:

The figure on bonuses for the top six employees comes from Ritholtz’s reporting. Ritholtz also reported that the total bonus pool for Pimco’s top 60 employees (known as managing directors), including the six whose bonuses he specified, was $1.5 billion. Senior employees in the finance industry receive an insignificant salary relative to the size of their bonuses. Adding details of these top earners' salaries would likely have almost no impact on the calculations. If anything, adding salaries would likely make inequality slightly higher.

I made the conservative assumption that the remaining portion of that $1.5 billion was equally split among the remaining 54 managing directors. That’s $14.7 million per MD. It's not unreasonable to assume that large swaths of Pimco's most senior employees are awarded almost equal bonuses, according to Cambridge's Raghavendra Rau.

To estimate the salaries for the remaining employees, I assumed that the rest of the $3 billion in revenue that Pimco withholds from its parent company, Allianz, is used to pay the rest of its employees. This is another conservative assumption: If Pimco paid less than $3 billion to employees, inequality would be worse than my calculations indicate.

Pimco has 2,462 employees. 758 of them are investment professionals, including 60 managing directors. For the 1,704 support staff, I followed Felix Salmon’s assumption that they make $100,000 each. Some, of course, make more and some less, but this is a very generous average income. And averaging it this way understates inequality at Pimco.

For the 698 non-managing-director investment professionals, I assumed they equally split what was left of the pay pool after the MDs got their $1.5 billion, and the support staff got their $100,000 each. That works out to $1.9 million per person.

(h/t to Felix Salmon for suggesting calculating Pimco’s Gini coefficient. And huge, huge thanks to Guan Yang and Thomas Hauner, PhD students at NYU in finance and The Graduate Center at CUNY in economics, respectively, for reviewing my calculations and suggesting smart refinements.)