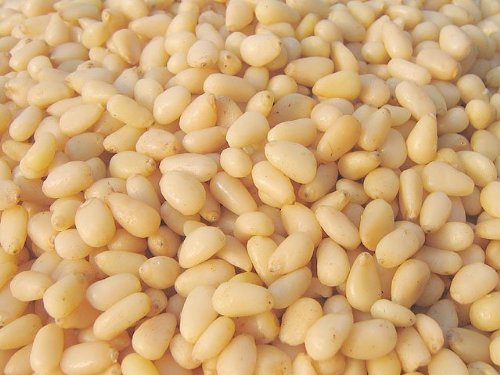 So there I was last week, developing Thanksgiving recipes for a major food magazine -- yes, they work that far ahead -- and nibbling on some pine nuts that I'd bought to make an open-face apple and pine nut crostata laced with Calvados. The first attempt wasn't exactly what I wanted but I kept nibbling at the tart until it was gone.

Two days later, after nailing the rest of the Thanksgiving meal -- a cider-glazed turkey, a puree of celery root, apples and carrots with sage buttered crumbs, and a stuffing made from rice, leeks, and herbs de Provence -- I'd had enough of my own cooking and took a friend to lunch to celebrate. The wine I drank tasted awfully bitter: Metallic and off-putting. Later that night I was invited to dinner at a friend's house in the neighborhood. It was hard to be polite about the meal because everything I ate tasted like I was sucking on cast iron.

I called my herbalist and my nutritionist, neither of whom had the faintest notion about what might be causing this odd eruption of bitterness in my mouth.

A frantic rummaging around the web unearthed a bewildering number of causes: from pregnancy, to mercury poisoning, to faulty fillings, but the one that began to make sense was pine nuts. Lots of people were blaming pine nuts they'd purchased from Costco and Trader Joe's but mine came from an upscale Park Slope gourmet food store. Fingers started pointing straight to China -- and why not? -- if they can poison our toothpaste, why not our pine nuts, too.

The condition is called "dysgeusia" or "metallogeusia" and not everyone is affected. The FDA says it is not an allergy but instead is an adverse reaction to something in the nuts. Its cause is still somewhat of a mystery. Lots of pine nuts have been shipped from China because they're plentiful and cheaper, but starting about ten years ago one particular variety of white pine nut grown there -- pinus armandii -- has been infiltrating packages of the good stuff. Pinus armandii is not classified as edible by the Food and Agriculture Organization, and is called "unfit for human consumption" by food safety experts at the European Commission. Strictly speaking, they're poisonous but don't cause permanent harm, which is why you still find them on food market shelves. These nuts, if you trouble to look, are much shorter than the more expensive ones from Italy that we once exclusively consumed; they should be avoided.

"Pine nut mouth" usually develops a day or two after eating the nuts and that's exactly what happened to me! Almost 48 hours after the last bite of my apple and pine nut tart came the ill-tasting wine and then several days of hideous heavy metal tastes in my mouth. Its cause is still the subject of some controversy, but toxicologists are pretty sure about the source. Its effects can linger from a couple of days to a couple of weeks and it is sure to put you off your feed. You can't "cure" it because it isn't a disease. Various bloggers report that taking activated charcoal tablets, which cost like the dickens at my health food store, lessens the symptoms (maybe), as does drinking aloe vera juice (perhaps not). I've heard that Pepcid works for some people as does sucking on those sour kids candies that I was tempted to buy.

I started to feel like Dr. Jekyll, experimenting with all sorts of foods. Lemon juice lit up the inside of my mouth, roast turkey tasted like fuel oil, and a button mushroom almost sent me to the hospital. I took a Benadryl instead. Strangely, the things I could almost tolerate were triple-strength black coffee (Bustelo) and ice cold tap water which tasted surprisingly good.

One blogging scientist explained that you can't alter the bitterness in your mouth because the actual reaction is registered in your brain.

I suspect that storing pine nuts too long in my freezer exacerbated this miserable experience. But about a decade ago when the price of pine nuts began to soar, so did the number of complaints about this poisoning. The Sherlock Holmes moment comes when you discover that the offensive Pinus armandii happen to grow only in China. Great pine nuts are harvested in the United States, Europe and Turkey, so if you find a jar in your food market with no country of origin on the label, or if the nuts come from more than one country, you might want to put them back on the shelf.

Four days have passed and I'm almost back to normal. Gratitude never tasted so good.