Singer Pink has dropped her rockstar lifestyle to breastfeed her daughter, Willow Sage. Instead of drinking and smoking during her recent album photo shoot, the mom of one nursed baby Willow, and even shared a stunning photo (Instagrammed, of course) of the two of them via Twitter: 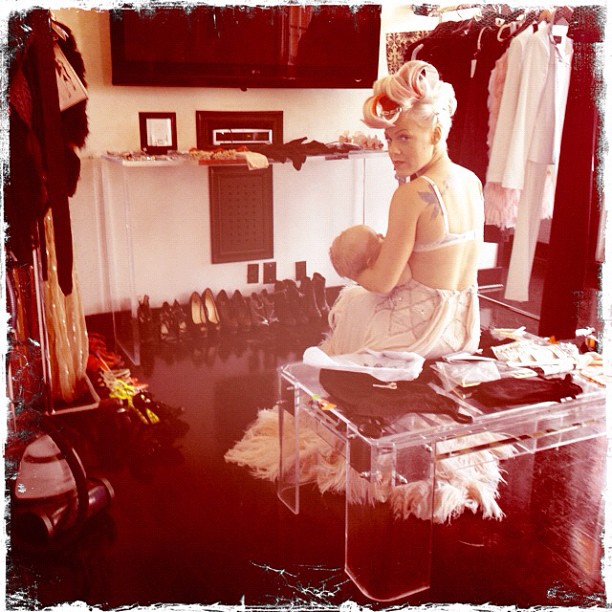 Pink isn't the first celebrity to tell fans she is breastfeeding. After attachment parents -- especially those who practice baby-led weaning and may breastfeed their children into toddlerhood -- came under fire (thanks to a certain magazine cover), famous moms spoke out in support. Alanis Morissette wrote in a HuffPost blog why being an attachment parent is important to her, actress Mayim Bialik defended specific aspects of attachment parenting on CNN, and according to Baby Center, Pink tweeted:

Indeed, though doctors and the American Academy of Pediatrics stand behind a "breast is best" ideal, the general public in the U.S. isn't always supportive of nursing moms -- breastfeeders are told to cover up in libraries, retail stores, courtrooms, the list goes on. Hopefully, Pink's photo will bring us one step closer to normalizing the image of a mom feeding her child.

Of course, celebs have been sharing their breastfeeding stories long before Instagram made it cool. Click through the gallery below of 21 Memorable Breastfeeding Moments In Hollywood History to see great quotes from Mary-Louise Parker, Kendra Wilkinson and more.

Memorable Breastfeeding Moments In Hollywood
More:
Parentspink breastfeedingparents-babiesVideowillow sage
Newsletter Sign Up
Raise the kind of person you'd like to know
Subscribe to our parenting newsletter.
Successfully Subscribed!
Realness delivered to your inbox