Fifty years ago, the members of just-formed Pink Floyd were mere souls swimming in a fishbowl. Now that they are some of rock's most championed performers, lead singer Roger Waters and drummer Nick Mason reunited on Thursday at London’s Regent Street Polytechnic, where they founded the group, to honor Pink Floyd's semicentennial.

Along with unveiling a commemorative plaque, Waters and Mason, both 71, chatted with the press and bantered about how bad the band was in its inception. Waters joked about needing to "floss more" now that they've earned such a lofty recognition, while Mason said that "if we’d gone up for 'Britain’s Got Talent,' I don’t think we would have made it past the audition stage." (“We were effing awful," Waters retorted.)

Pink Floyd stopped touring in 1994, but the band has reunited a few times over the years, most notably at 2005's Live 8, which marked Waters' first performance with the group since 1981. Guitarist and singer David Gilmour was not on hand for Thursday's commemoration, as he was not a founding member. Keyboardist and singer Richard Wright died in 2008, while singer and guitarist Syd Barrett -- a founding member who was only with the band for three years -- died in 2006.

Pink Floyd is the second musical act to receive a Regent Street Heritage Plaque. They are preceded by David Bowie, who earned one in 2012. Bowie's is stationed at same spot where his artwork for "The Rise and Fall of Ziggy Stardust and the Spiders From Mars" was captured.

Watch the videos below for more from Pink Floyd's commemoration:

Courtesy of The Globe and Mail 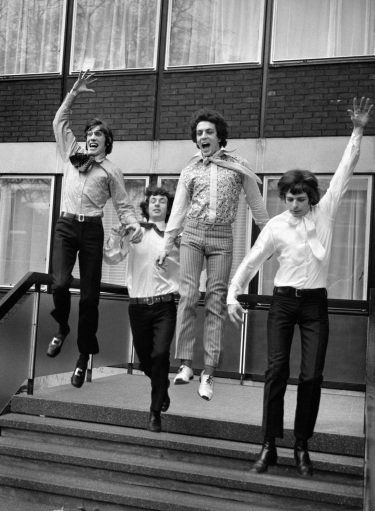