A few weeks ago, my 4-year-old daughter Sophie and my mom were talking about Sophie's scooter, the one big gift she wanted for Christmas. She told my mom how much she liked riding it but added, "I don't know why Santa got me a green one, though, when I asked for pink."

And she did ask for pink. We were well aware she wanted pink. Pink, pink, pink. Andy spent a lot of time researching scooters and, honestly, we blew her Christmas budget getting her a nice one, a safe one, one that could be passed down to her brothers when she was through with it. And yes, of course, her brothers could ride a pink scooter. I have no problem with that. But would they want to? And what's more, almost everything Sophie owns is pink. Everything else she was getting for Christmas was pink. So Santa put a green scooter under the Christmas tree.

Sophie hasn't always been obsessed with pink. The first time we let her pick out her own shoes we ended up in the boy section because she wanted dark navy light-up Buzz Lightyear shoes. And she loved them.

She had baby dolls and a pink stroller when she was younger, yes, but she also had a wooden train set and a play kitchen painted primary white, red and blue. I dressed her in jeans all the time. She refused to wear accessories in her hair. Up until about six months ago, we didn't own a single Disney princess movie. Instead, she preferred "Finding Nemo" and "Cars."

And then pink happened. And by happened, I mean happened. She wanted everything to be pink -- her clothes, her toys, her room, her cup, her plate. She took notice of when the Sundance Catalog arrived in the mail and she'd spend 20 minutes pointing out jewelry, saying big words like "beautiful" and "gorgeous." She played "princess" and "wedding" and threw lavish parties for queens. The worst? She started qualifying things. "Those are girl toys," she'd say, walking past an aisle exploding with all things glitter and pink in Target. Or, even worse, "That's a boy book," she'd say, pointing to a book about insects.

Cue me totally freaking out.

This, of course, led to to me spending several hours online one night, with a glass of wine in hand, researching the matter and stumbling across books like Peggy Orenstein's Cinderella Ate My Daughter: Dispatches from the Front Lines of the New Girlie-Girl Culture, Jennifer L. Hartstein's Princess Recovery: A How-to Guide to Raising Strong, Empowered Girls Who Can Create Their Own Happily Ever Afters and Cordelia Fine's Delusions of Gender: How Our Minds, Society, and Neurosexism Create Difference.

Now, to be fair, I should note that I didn't actually read any of these books (which is honestly how I usually treat parenting books -- I freak out, I spend hours researching them, I buy them, and they collect dust on my bedside table while I lament that I never have any time to read anything, usually while doing something like watching "Downton Abbey"). I did, however, read the descriptions and reviews on Amazon, which was enough to convince me that Cinderella is, indeed, eating my daughter and somehow, somewhere along the way we totally screwed up (if I had to pinpoint an exact moment, it was probably the evening I ordered her a chandelier for her bedroom -- although, I admit, I love that chandelier).

And now our child has issues with the Big Man who lives in the North Pole because he brought her that scooter in green and green "isn't a pretty color."

But here's what I struggle with: Sophie loves pink. She loves flowers and rainbows and glitter and sparkle and jewelry and dresses. Right or wrong, it's part of who she is. And by denying her some of that, by guiding her away from that, by implying that what she likes is somehow wrong, isn't that just as stifling to her individuality than if I told her she couldn't wear boy Buzz Lightyear shoes because they're dark blue?

I think, like most things, there has to be balance. For Christmas she received a princess dress. And a princess castle. Her brothers got her a Fancy Nancy board game. She got lots of pink. But she also got a green scooter. A nice, well-made scooter that will last her several years and when she's through with it, will be (hopefully) in fine enough condition for the boys to use, too. The choice was economical. But not purely. Even at 4, I think it's good and appropriate that she not always receives everything she asks for, exactly as she wants it -- even when it's the thing she wants most for Christmas. And honestly, Andy and I were simply becoming overwhelmed with all the pink. We worried about the culture of pink. We worried that more pink would create more division of "boy things" and "girl things," when, in reality, things are just things.

Come Christmas morning Sophie was quiet about the scooter. She was happy to receive it, yes, but there was no jumping up and down. It was a reserved happiness. We worried. She insisted on keeping the long, red satin ribbon tied on it so that "it would be pretty." I couldn't decide if we had made a good parenting decision or a a terrible one. I was torn. 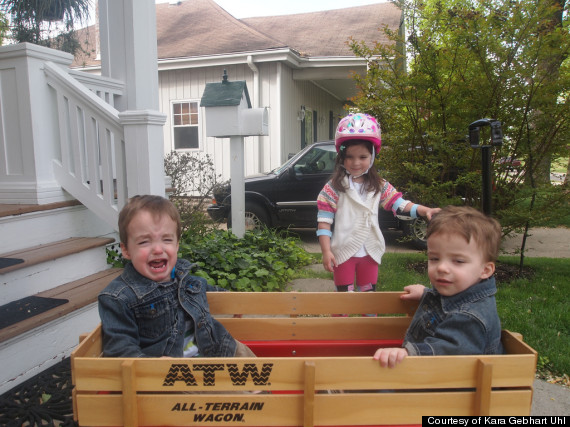 She loves her scooter. The satin ribbon has long been taken off. Every day I put the boys in the wagon and we follow her, a blur of pink and green, as she navigates the sidewalk on our street. (I should note Owen loves these wagon rides but in this picture I had just put on his TOT collar -- for his torticollis -- which usually he doesn't mind, but for whatever reason on this particular day he was crazy upset about it.) She laughs and every day tries to go faster and faster and faster--and it's been weeks since she's lamented about her now-favorite toy's color.

I believe we made the right decision. I believe it's OK to let her choose her own clothes and I believe it's OK that almost everything is pink -- it's what she wants, it's what she likes. I believe it's OK if she watches Disney princess movies and wears tiaras around the house and has pretend weddings. But I also believe that it's my job as a parent to correct her when she claims some things are for boys while others are for girls. That I need to expose her to books and television shoes and movies and board games and toys that are all colors of the rainbow, that cover many different subjects ... activities that require fine china, tiaras and pretty dresses, and activities that require dirty knees, dump trucks and bug boxes. I believe that somehow we have to acknowledge who she is and what she likes while also exposing her to the world at large -- because with exposure comes new interests, new likes and, most importantly, new ways of thinking.

I'd love to hear your thoughts on the matter. One of which, I'm sure will be, "read those books." In the meantime I plan to let her dig in the dirt while wearing tutus, play superheroes while wearing a (pink) cape and have as many pretend weddings as she wants (even if she's marrying my husband over and over). And although I can pretty much guarantee she'll be wearing pink, I expect her to ride her scooter daily -- even if it is, green.

"We've begun to raise daughters more like sons ... but few have the courage to raise our sons more like our daughters." --Gloria Steinem

More:
ParentsChristmasgender-neutralpinkgirls-toys
Newsletter Sign Up
Raise the kind of person you'd like to know
Subscribe to our parenting newsletter.
Successfully Subscribed!
Realness delivered to your inbox