Pink slime means one thing in the food world. But in your home, it's something entirely different -- a bacterium, to be exact.

According to Melissa Maker, the owner of Clean My Space, the pink slime that forms at the bottom edge of your shower curtain is an airborne bacterium -- not a mold, as commonly thought -- technically known as Serratia marcescens. The pesky growth thrives in damp environments like bathrooms, and feeds off common toiletries, such as soap and shampoo.

As startling as the words "airborne" and "bacteria" may be, Maker says the bathroom variety of pink slime is fairly innocuous if you manage it. "The growth of the bacteria in the bathroom can happen fairly fast because it is airborne, so despite how much you clean, its presence in the air is the issue to contend with," Maker says. "It’s not so much a clean-to-get-rid-of issue, it’s a clean to manage issue," she adds, noting times when she's seen pink slime crop up once again within weeks.

The amount of moisture and soap scum in a bathroom will also determine how long you can keep the bacterium at bay, which is why Maker recommends properly ventilating the room during and after a shower for at least 30 minutes, and using a squeegee or after-shower spray to get rid of soap and shampoo residue on your shower curtain and tub. For a DIY-friendly version, mix water with tea tree oil. 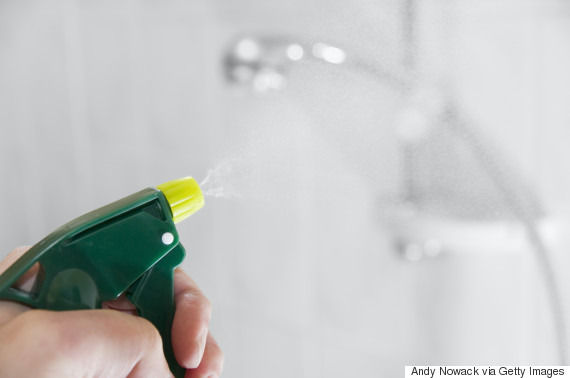 Maintenance aside, here are three easy steps to killing pink slime that's already made its mark:

"The key is to let the product sit for long enough for it to effectively kill the bacteria," Maker says. If the pink slime prevails, throw the shower curtain in the washing machine with a couple of towels and some mild detergent. For an extra anti-bacterial effect, Maker suggests adding 10 drops of tea tree or lavender oil to the wash and a bit of vinegar to the fabric softener cycle. Hang the curtain to dry.