For my Little Dude's 2nd birthday party, we hired a guy in an Elmo costume to entertain the kids for an hour. As part of his shtick, Elmo made balloon animals for the kids. Since it was his birthday, the Little Dude got first choice and was very excited when he saw the rainbow of options laid out before him in cheap latex. There were myriad options: blue, red, yellow, orange, green, pink, purple and pretty much every other color on George Clinton's head. If it were me, my first choice would always be blue. My son picked pink. My heart sank. 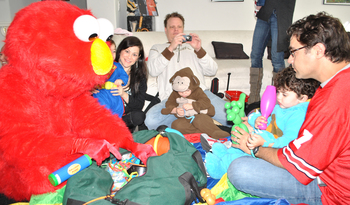 The following week, at a friend's birthday party, one of the goodie bag items was a bottle of Mr. Bubble pink foamy bubble bath. Seems harmless enough, right? After we introduced it to his bath routine a few days later, every night he was clamoring for "Mas Pinky!" (Side note: he uses "mas," which means "more" in Spanish, more than the actual English word "more" for some reason.) When that bottle ran out, we replaced it with a bottle of blue Mister Bubble foam which he now refers to as "Blue Pinky!"

There have been a few more instances like this over the last few months which have made me start drilling down into my subconscious on this. What's the problem, you ask? I guess the "manly man" portion of my psyche yearns for my son to be a manly man, too, and choose blue instead of pink. Is it my "fault" that he likes pink? Did I do something wrong? Should I have covered him in freshly skinned animal pelts as an infant instead of soft silky blankets?

I did some research to find out why our society associates blue with boys and pink with girls. I figured the tradition dated back hundreds of years and had a purpose-driven origin. I was shocked to learn it's only been since WWII and that pink was originally associated with baby boys because it was recognized as a stronger color. Light blue was seen as better for baby girls because it was "softer." Whatever that means.

As a dude who grew up in the 1980's, you might think I would like pink. Most of the movies I grew up watching featured either a very cool or very wicked male protagonist (usually Andrew McCarthy or Rob Lowe) who was invariably dressed in a preppy pink polo shirt. But the preppy style died down when the '80s ended and grunge styling took over. I don't remember Nirvana wearing much pink flannel during the early '90s.

So should I be bothered that my son would pick a "girlie" color, if given the option? At first, I was frustrated. I want him to like the things that I like. A big part of parenthood is teaching and influencing our offspring. That's why I play him the music I like and why he has Ohio State memorabilia all over his room. It's not that I don't like pink. It's just that it's not blue, which is my favorite color.*

My Little Dude's affinity for pink is merely that: something that is pleasing to his senses. Does it make him any less of a dude? Not at all. It's simply a matter of personal preference. I don't understand why he would ever choose to eat a whole bag of plain rice cakes instead of pizza, but I don't think that makes him any less of a dude, either.

After thinking about all of these factors, I think it really just means he's more creative for looking outside of the box. He is very artistic in many ways, so this is probably just an extension of how his unique mind operates. I don't want him to be a conformist anyway, so I give him credit for blazing a dudely new trail. Even if it leaves a trail of pink dust behind it. 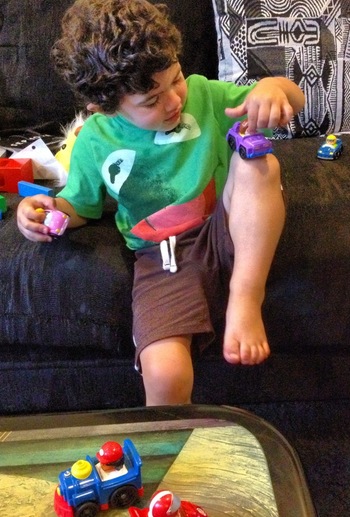 Epilogue: After composing this, I tried to think of pink things I like and came up with a short list:

Pink Ribbons: Enough said.
Pink Floyd: If you don't eat your meat, how can you have any pudding?
Pink Panther: Not the crappy Steve Martin version, though.
Pink Lemonade: Though I have yet to encounter a pink lemon...
Pink's Hot Dogs: Their lines are always atrocious, but the dogs are top notch.
Pink Houses: Ain't that America?

*=Is it strange for a grown man to have a favorite color? Or just to admit it?

Check out more of Jay's adventures with his 2 ½ year old Little Dude at www.thedudeofthehouse.com.
Come connect on Facebook and Twitter for even more fun. And please bring pizza.