"Patriotism is your conviction that your country is superior to all others because you were born in it." -- George Bernard Shaw

Human beings tend to assume that whatever group they happen to comprise is self-evidently the best, God's chosen ones -- and everyone else's equally passionately held belief that they are the chosen few is simply delusional. You'll never hear a crowd chanting, "They're Number One!"

If you doubt the power of this delusion, ask any trailer-park redneck if he'd rather be living in France.

Tenured intellectuals are just as susceptible to these self-aggrandizing tendencies. But even if their sense of superiority comes wrapped in rational argument, a sloppy approach to evidence underpins the comforting -- yet false-conclusion. And the habit isn't expressed only in terms of nationalism, when it comes to comparing the distant past to the immediate present, even the most level-headed analysts tend to abandon any pretense of intellectual rigor and simply declare, "Now is best! Case closed."

And really, who's going to argue? We've all got a emotional stake in believing this to be the best possible time to be alive.

Best-selling author Steven Pinker recently published The Better Angels of our Nature expanding on a false argument he's been making for years. He presented it at the TED conference (Technology, Entertainment, Design) in Long Beach, California in 2007. Pinker's presentation provides both a concise statement of the unassailable superiority of the present over the past and a smelly example of the surprising rhetorical tactics to which even very smart people will resort to promote a vision of human prehistory that is more propaganda than scholarship.

Three and a half minutes into his talk, Pinker presents a chart that he claims shows "the percentage of male deaths due to warfare in a number of foraging or hunting and gathering societies." These societies, he says, are similar to those in which our ancestors evolved, and thus reflect prehistoric conditions. The chart shows that men in these societies are far more likely to die in war than are men living in contemporary Western societies. This is the foundation for Pinker's claim that "we now live in perhaps the most peaceful period ever." 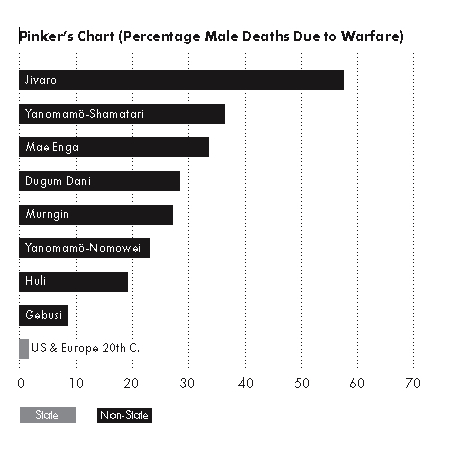 But hold on. Take a closer look at this encouraging claim. The seven cultures listed on Pinker's chart are the Jivaro, two branches of Yanomami, the Mae Enga, Dugum Dani, Murngin, Huli, and Gebusi.

Are these societies actually representative of our hunter-gatherer ancestors?

Are they even hunter-gatherers at all?

Only the Murngin even approach being an immediate-return hunter-gatherer society like our prehistoric ancestors, and they had been living with missionaries, guns, and aluminum powerboats for decades by 1975, when the data Pinker cites were collected.

None of the other societies cited by Pinker are even arguably immediate-return hunter-gatherers like our ancestors. They cultivate yams, bananas, or sugarcane in village gardens while raising domesticated pigs, llamas, or chickens. This is crucial, because societies are far more likely to wage war when they have things worth fighting over (pigs, gardens, settled villages), but tend to be far less conflictive when living as nomadic hunter-gatherers, with little to plunder or defend. Any first-year anthropology student knows this. Presumably, so does Pinker.

Beyond the fact that these societies are not remotely representative of our nomadic hunter-gatherer ancestors, there are more problems with the data Pinker cites. Among the Yanomami, true levels of warfare are subject to passionate debate among anthropologists. The Murngin are not typical even of Australian native cultures, representing a bloody exception to the typical pattern of little to no intergroup conflict. Nor does Pinker get the Gebusi right. Bruce Knauft, the anthropologist whose research is cited on this chart, reports that warfare is "rare" among the Gebusi, writing, "Disputes over territory or resources are extremely infrequent and tend to be easily resolved."

To make matters even worse, Pinker juxtaposes these bogus "hunter-gatherer" mortality rates with a tiny bar showing the relatively few "war-related deaths of males in twentieth-century United States and Europe." This is a false comparison because the twentieth century gave birth to "total war" between nations, in which civilians were targeted (Dresden, Hiroshima, Nagasaki... ), so counting only male military deaths requires ignoring all the millions of civilians victimized by war.

Furthermore, in celebrating "our most peaceful age," Pinker ignores the Rape of Nanking, the entire Pacific theater of World War II (including the detonation of two nuclear bombs over Japan), the Khmer Rouge and Pol Pot's killing fields in Cambodia, several consecutive decade-long wars in Vietnam, the Chinese revolution and civil war, the blood-drenched India/Pakistan separation, and the Korean war. None of these millions of victims are included in Pinker's assessment of twentieth-century (male) war fatalities, because he only includes the U.S. and Europe.

He also leaves out Africa, with its never-ending conflicts, child soldiers, endemic rape, and casual genocides. No mention of Rwanda. Not a Tutsi or Hutu to be found. He leaves out every one of South America's various twentieth-century wars and dictatorships infamous for torturing and disappearing tens of thousands of civilians. El Salvador? Nicaragua? Argentina? Chile? More than 100,000 dead villagers in Guatemala?

Pinker's assertion that we live in the most peaceful time ever requires wild misrepresentations of both the past and the present. Surely, the better angels of our nature wouldn't bless such distortions.

(This has been adapted from Sex at Dawn: The Prehistoric Origins of Modern Sexuality.)

(1) The chart is based on one in Lawrence Keeley's War Before Civilization: The Myth of the Peaceful Savage (1997). Note that Keeley is more careful than Pinker, in labeling these societies only as "Non-state," which would include tribal, horticultural people like those listed. Yet another reason Pinker should have known he was twisting the evidence to fit his conclusion.
(2) See, for example, Yanomami: The Fierce Controversy and What We Can Learn from It (California Series in Public Anthropology), by Rob Borofsky (2005).
(3) The Gebusi: Lives Transformed in a Rainforest World, by Bruce Knauft (2009).

For a different critique of the illogic in Pinker's argument, see this.

Author of NYTimes best-seller, "Sex at Dawn: The Prehistoric Origins of Modern Sexuality"