Mercedes Benz Fashion Week is upon us and designers who continue to use animals in the production of their garments brace for a new generation of disruptions, not from the paint-throwing animal activist set, but rather from a confederation of intelligent tastemakers. Pinnacle: Reinvent The Icon, a unique initiative from fashion insiders, aims to redefine the once "iconic" aesthetic of animals skins in fashion by showing that cruelty-free couture is the inevitable, fashion-forward conclusion for designers to make. Pinnacle is quickly establishing itself as a fresh, driving force behind a new mutiny of ethics within the fashion industry. Founded by Joshua Katcher, author of The Discerning Brute blog, Pinnacle aims to "re-invent the icon" through "an image-driven initiative to educate the style-savvy about the true meaning of fur." Pinnacle is doing so by enlisting and recruiting new designers, models, artists and spokespeople, and through a series of stunning oversized broadsheets with superb art direction printed on recycled paper with soy inks. 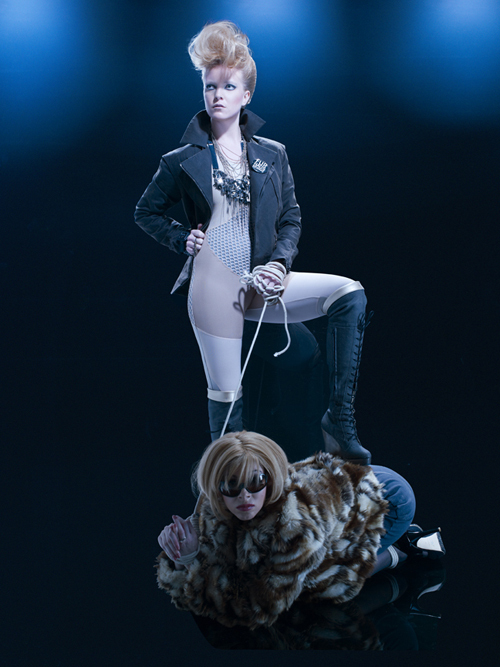 With a subversive and coy use of the visual language of fashion, Pinnacle's most recent broadsheet takes a metaphorical jab at the pro-fur exploits of Vogue editor-in-chief Anna Wintour with a provocative and iconic photo feature and editorial entitled 'AnnaMal Kingdom' in which ELLE magazine cover girl Jessice Sjoo and her twin sidekicks trap, disrobe, and ravage model Rachel Kay. Kay, daughter of Abbie Hoffman's right hand man, the "Yippie Pie Man" Aaron Kay hardly shies at controversy and when sporting a bob haircut and a pair of gaudy oversized sunglasses bears a striking resemblance to Wintour herself.

"Editors and stylists wield an incredible amount of power over the lives of animals used for fur. These images are intended to be a fun, but serious commentary on the use and celebration of ruthless power within fashion culture, placing people who are at the top of the fashion hierarchy metaphorically on the bottom, where animals are stuck," Katcher said when asked about the editorial.

Earlier this week as fashion week was about to begin Pinnacle deployed a street team of shrewd, fashion media experts to hand-deliver the broadsheets to 150 of the top editors in fashion publishing. Let the water cooler talk begin...

No matter how style-savvy Pinnacle's narrative is, the larger message that the use of animal skins in fashion is wrong, is an unavoidable one. Each year as many as 75,000,000 animals are raised and trapped solely for garment production. As many as 70 mink are needed to make a single full-length mink coat, similarly it takes 20 foxes to make a coat, 40 raccoons, 40 rabbits, and as many as 200 chinchillas. Animals on farms are killed by either gassing them, breaking their necks, or by anal and vaginal electrocution, a practice used by fur farmers to best preserve the animal's exterior coat. Animals that are trapped in the wild often languish for days on end with an appendage caught in a trap, some will gnaw a limb off in attempts to escape, many more will die slow deaths due to exposure and will only be recovered when the trapper returns to check his or her trap. Non-target species also fall victim to traps set in the wild. For example - the trap, once set will not discriminate between a fur-bearing target species and an endangered bird or a domesticated dog or cat who is allured by the bait.

For years now fashion week has been coupled with almost predictable, reactionary protests against designers for their use of animal fur, skins, and by-products in their lines. Paint being thrown on runways, nude women with placards storming the catwalk, or rallies outside after parties became a routine that designers who used animals learned to adapt to and learned to wear as a badge of honor in the feigned war of being edgy. Less expected, less frequent, exceptionally effective, and very illegal, were the non-violent direct actions of groups like the Animal Liberation Front who would occasionally free mink, fox, and raccoon from fur farms whilst destroying the property used to bring the carcasses to market. These actions would be less frequent, but even in these cases the designers and animal industry reps had plans of action to deal with them when they would occur.

"The fur industry is a money making enterprise above all else. It is perpetuated by manipulative, multimillion dollar marketing campaigns that target magazine editors, stylists, fashion students, designers, and fashion consumers. The New York Times recently reported on tactics used to "buy" young designers. Yet the industry continues to peddle the myth that fur represents luxury, wealth, taste, and class - and they have gone so far as to call fur "eco-friendly", and even exploit indigenous people's traditions to accommodate their arrogant, greedy and frivolous use of animals."

What the fashion industry did not expect, was a growing list of insiders themselves taking action to rid the industry of it's use of animals.

"Any designer in the fashion industry who does not want to see... exactly what happens to animals and how they're treated and how the product they use comes to the marketplace, I believe is egregiously irresponsible" - Tim Gunn (source)

"I'm going to [fashion] shows to see my friends, it's a bit uncomfortable because I know they're using fur and they know how I feel... They don't understand why fur isn't fabulous. [Many] consider fur as fabric. There is this incredible disconnect." - John Bartlett (source)

"I've always been anti-fur - I love my pets...and I could never see them being worn. It's a very human time right now, and what's the sense in more carnage? There are other things in life to celebrate and design doesn't have to be draped with dead animals." - Victoria Bartlett // VPL

Animal fur has come to represent arrogant indifference and frivolous cruelty. The problem is a stubborn disconnect between the physical reality of fur production vs. the mythology of the fur object. Designers, editors, stylists and retailers who resist this changed meaning risk being seen as out-of-step, ignorant of a well-documented reality, and unwilling to embrace knowledge, compassion and cultural and artistic evolution. More and more fashion professionals are taking a stand for a clear and honest consistency with the values most of us already share, and are making changes without compromising aesthetics. There is no reason we can't all join this next big step for the fashion industry.