We've recently entered an inevitable and interesting new phase of parenting. Our children's friends are reproducing themselves. Babies seem to be coming out of the woodwork these days. They're at parties, wedding showers, sporting events -- everywhere we go. They even distract us with their baby antics when we are trying to focus on God at church on Sundays.

I understand the whole Circle-of-Life thing, I'm just surprised that my three daughters have gotten sucked-in and become obsessed with this Reproduction Craze. They are constantly texting and inundating me with pictures of babies. I know they're propagandizing and trying to get me interested in becoming a grandmother. I see right through it. And, if it all wasn't alarming enough, I'm pretty sure my youngest daughter actually has created a Pinterest Board devoted exclusively to pinning* babies she finds "Pinteresting," (as though she will be placing her order soon and wants to zero-in on what style baby she prefers).

Not only am I wise to what my girls are up to, I'm totally on to the how and why things are designed this way. The "newbies" among us have to be disarmingly adorable in the interest of propagating the species. For two full decades, in the 80s and 90s, I fell hopelessly into this trap. I brought home baby after baby after baby. I couldn't get enough of them -- just loved the little things! How much fun they were -- complete with their little accessory packages. Each one entered the world a miniature version of themselves, but even more endearingly, miniature versions of Me. They were easy to manage, surprisingly affordable and so small, we could practically carry them home in a shoe box. Like a little Matchbox Car.

In fact, the more I think about it, having a baby is actually exactly the same as buying a new car: Let's say for example, you have a neighbor that gets a sports car. They drive it home and you can't rush over fast enough to admire the damn thing. Then, next thing you know, you start thinking you might want one yourself...

Your friend says, "Wanna drive her?"

You get behind the steering wheel and your whole world falls into place -- it just feels so right. So shiny and new; you can't inhale it's brand new scent into your lungs deeply enough. So you go right home and tell your unsuspecting mate, "WE need one of those! Everyone has ONE and some people even have TWO!" It's such a sound case you make, and your adoring spouse, who can deny you nothing, cautiously agrees. 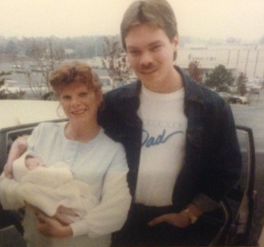 The next thing you know, the years have flown by and you've gotten the two of you way in over your heads. You find yourselves bogged down with non-stop Repair and Maintenance. You're always in the "shop" with some issue or another. Unlike your neighbor's model, the one you ended up with seems to be finicky, temperamental and often more trouble than it's worth. You're drowning in "upkeep," and delayed "sticker shock." And, what's more, since you're in the turbulent teen years now, there is considerable depreciation in the resale market. That's right, people who would've literally paid to take your kid off your hands 18 years ago, now keep their distance from you and yours.

Even though my husband and I are far too young and hip to be anybody's grandparents, I know I'm probably the last person who can go on record as being opposed to my babies having babies, after all, with five children, my garage runneth over. I'm merely saying, be careful not to go for a test drive unless you know what you're in for. Last Saturday night, at a party, I held my daughter's friend's baby, and, even though I purposely did not inhale, I think I might be a wee bit pinterested now.

*This post is dedicated to an entire generation that still thinks "pinning a baby" is something one inadvertently does while changing its diaper...