Hey sailor, would you like to talk about why laws that ban or otherwise restrict the ownership of pit bulls aren't an effective way to promote public safety? 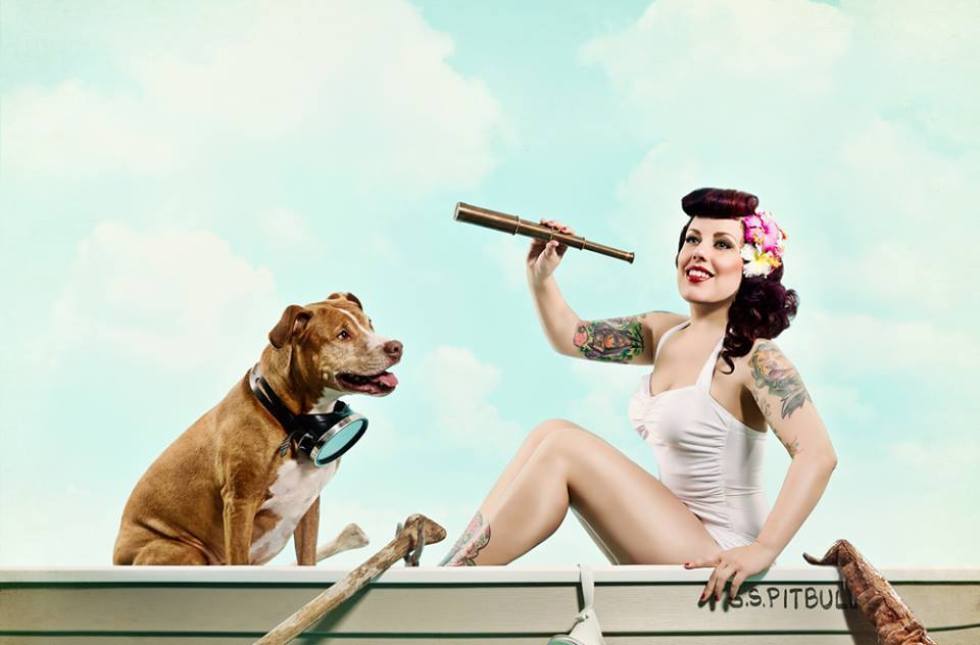 Deirdre Franklin has been combining her interests in slinky retro fashion and blocky headed dogs for about a decade now.

The founder of Pinups for Pitbulls, Franklin is a burlesque performer going by the stage name "Little Darling." She got involved in the dog cause while volunteering as a teenager at a Philadelphia animal shelter that had a policy of putting down every pit that came through its doors.

After one especially heartbreaking euthanasia, she sought out a pit bull of her own, and came to adopt a pup named Carla Lou from a Texas rescue group who shipped the dog even though Franklin was so young and far away.

Getting the dog opened Franklin's eyes: she learned that pit bulls are barred from living in hundreds of jurisdictions around the country and that people will cross the street when they see one walking down the sidewalk, even if the dog's tail is wagging.

She learned that even dogs like Carla Lou, who'd been left to die in the basement of an abandoned house before her rescue, and who have been shuttled across the country into the care of arguably-unprepared teenagers, are "amazing," Franklin says. "She inspired me to defend her kind for the rest of my life." 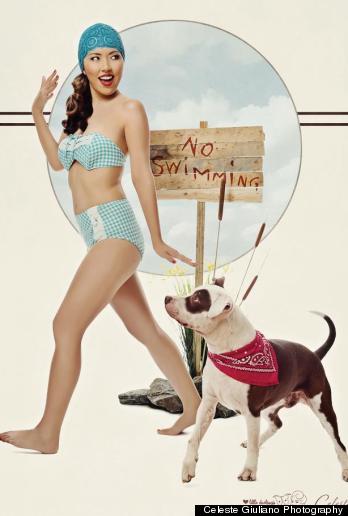 These efforts started with a calendar. The hook was appealing pictures, so that folks who like photos of good-looking women cavorting with dogs would also get a dollop of pro-pit messaging.

"Once you have them engaged, then you can educate them," she says. "I thought it would be a little Kinko's-style calendar that would come out for, like, one year."

Only that first year was 2007 -- Pinups got started in 2005; it took a little while to put out the first calendar -- and the Michael Vick dogfighting bust was stirring up more interest in pit bulls.

"So I got a lot of press because of his story," says Franklin. She decided to go to grad school and earned a masters of science in public policy from Drexel University in order to make sure that she was using her newfound platform responsibly. 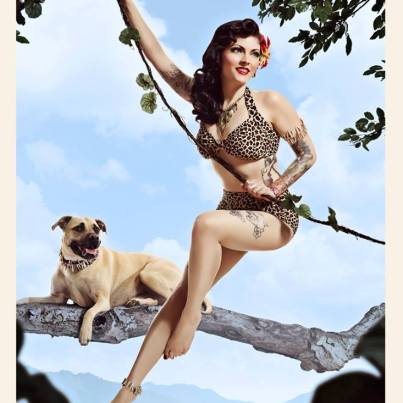 Franklin wrote her grad school thesis on the many, many problems with pit bull bans, or "breed specific legislation." Indeed, it's for good reasons that groups like the American Bar Association, the Centers for Disease Control and, most recently, the American Veterinary Medical Association have taken positions against these sorts of restrictions.

Here's your dollop of messaging: The problems include that the restrictions are expensive and difficult to enforce, without making anyone safer; they also lead to good dogs being taken away from loving families due to nothing more than the shapes of their heads. Some families are forced either to move, or to live in fear that beloved pets may be seized without having done anything wrong, other than being born into a form that makes people nervous.

Along those lines, Franklin's interest went beyond the political: "I was terrified," she says, "that someone could come to my door and take my dog away from me, like the Gestapo." 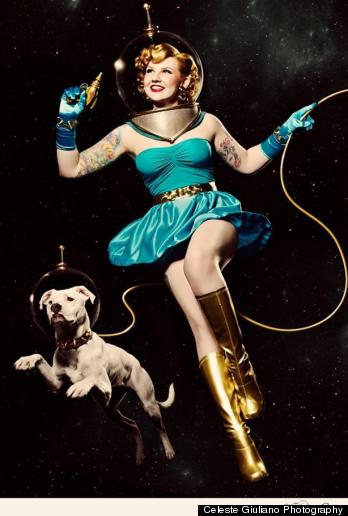 Since that first calendar, which is now an annual event, Pinups for Pitbulls has expanded its advocacy and education work, while also helping rescue groups with their work for homeless pets.

This fall, get ready for Pinups for Pitbulls, the book edition. Due out in October, the book is more than half photos. But there's also a section about hero dogs, like Wallace the pit bull, plus tools for training dogs and becoming a pit bull advocate, information about breed specific legislation, a history of Pinups for Pitbulls and Carla Lou the dog who inspired it, and more. 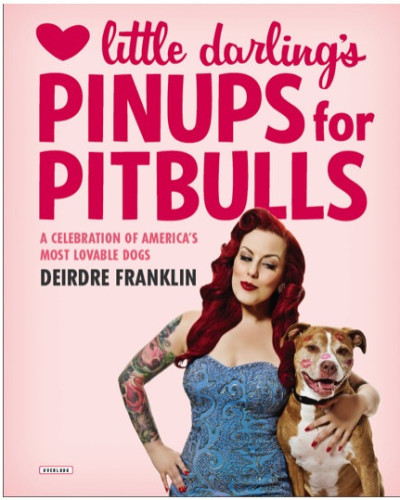 Franklin, who now lives in North Carolina with her husband and their dog Baxter Bean (Carla Lou died as an elderbull in 2012), hopes the book will reach an even broader audience with the message that pit bulls may be goofballs -- see, for example, Thelma Sparklepants, a calendar model-cum-therapy dog Franklin says has been known to let out remarkable gaseous expulsions during petting sessions -- and they may be frequent victims of discrimination and abuse.

But at the end of the day, she's hoping that the pretty pictures -- and all the rest of it -- will help people see that pit bulls are canine companions, nothing more and nothing less.

"It's just really an opportunity for dialogue," she says. "I want people to know that they're just dogs. Period. They are special to people who have them. But they're just dogs who have the same kind of personalities as other dogs. They sleep on the couch. They fart. They like treats, and they like belly scratches, like the next dog." 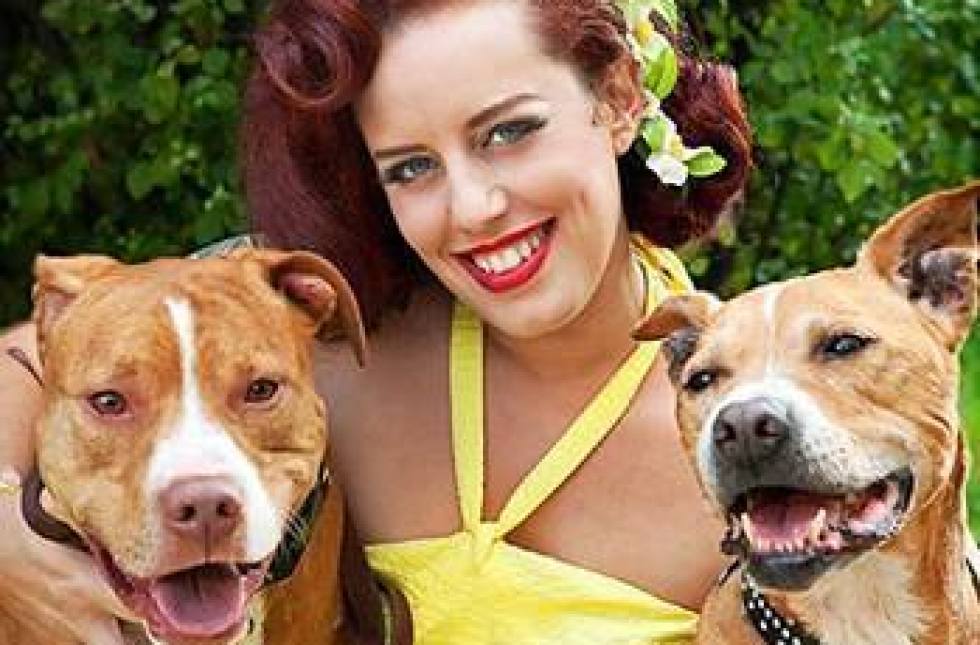 Franklin with her dogs Carla Lou -- who inspired the creation of Pinups for Pitbulls -- and Baxter Bean. Photo credit: Wandering Bohemian Photography