When it comes to pushing lots of water through lots of pipes over long distances, nothing works better than old-fashioned gravity, something the Romans figured out and carved into stone more than 2,000 years ago. Might there be a way to tap into those rushing underground rivers and generate some sustainable hydroelectric power without slowing down the streams?

To find out, you have to go beneath the streets of Portland, Oregon, where an innovative startup is adding turbine-equipped pipes to the city's water system and providing power to Portland General Electric.

Lucid Energy's LucidPipe technology captures energy from fast-moving water inside of 24-inch to 96-inch gravity-fed pipelines, with no impact on their flow or operation. Each egg beater-like turbine spins to produce up to 100 kilowatts of constant renewable electricity, and multiple units can be installed into a single pipeline for a system that the company claims can generate more than a megawatt of electricity. The faster the water travels, the more power you get. (It performs best at velocities greater than four feet per second.) 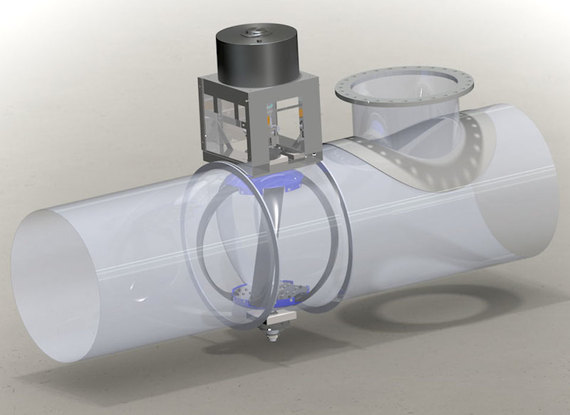 Because LucidPipe technology is self-contained, installation is as simple as removing a piece of existing pipe and dropping the LucidPipe into its place. Installation usually takes about a day, and the generators can be connected to the grid within a week.

After a successful test in Riverside, California, Lucid Energy came home to Portland, where it installed four 42-inch LucidPipe turbines in January. They're now being tested as they provide enough power for 150 homes, according to the company. Lucid has a 20-year agreement to sell the power to Portland General Electric and hopes to make up to $2 million. When the agreement ends, the system will be handed over to the Power Water Bureau.

Lucid Energy is quick to point out that its technology will work not just in municipal water systems but wherever a large volume of water -- or wastewater -- is rushing through a fairly large pipe. That means factories, refineries, and other industrial sites are also candidates for LucidPipe technology. And while they're at it, maybe the company should set its sights on Rome.